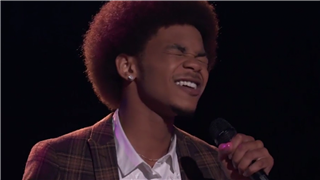 Cam Anthony’s performance on The Voice’s final night of Knockout Rounds was so good, it had John Legend second-guessing himself!

Blake Shelton pitted the 19-year-old singer against Connor Christian for his team’s final showdown ahead of the season 20 live shows, but Cam proved that he was in a world of his own when he took the stage for his performance of “Feeling Good,” singing the version of the song made famous by the legendary Nina Simone.

“My main thing for this round was to find something that I could lose myself in,” Cam said during rehearsals. “If you watch Nina Simone when she’s performing that song, she literally has left the scene, and it’s like, channeling through her.”

The coaches were, in fact, blown away by Cam’s performance, with Nick Jonas praising the unique rendition as “flawless and creative…It seems like you tapped into something that was otherworldly.”

And John Legend couldn’t help but compare himself to Cam. “I just sang that song, in a pretty big moment in my life, at the inauguration,” he noted. “What I loved about your performance is, I heard something I was jealous of, that you did, that I would have never thought to do.”

“I really believe in you,” he added, lamenting the fact that Nick blocked him from landing Cam during the Blind Auditions. “I think you have the ability to be a true artist, beyond this show, beyond anything.”

As for Cam’s coach, it was something of a no-brainer to declare him the winner of the Knockout and send him forward to the live shows. “You have a gift and I’m very happy for you,” Blake praised.

In addition to their coaches, the season 20 performers had extra input during the Knockout Rounds from this season’s Mega Mentor: Snoop Dogg! ET spoke with Snoop ahead of his epic reveal, and the legendary rapper shared how excited he was to help coach the up-and-coming singers and impart his own wisdom and experience to the hopeful stars. But, while he had his own thoughts on each of the coaches, Snoop wasn’t playing favorites!

“It’s hard to say which team that I like working with the best, because there’s so much talent inside of each team,” he marveled. “Each team has some unique singers and some unique artists that could possibly make it past the show. I know only one person’s gonna win, but it seems like there’s about six or seven record deals up in here.”

See more in the video below. The Voice airs Mondays at 8 p.m. PT/ET on NBC.