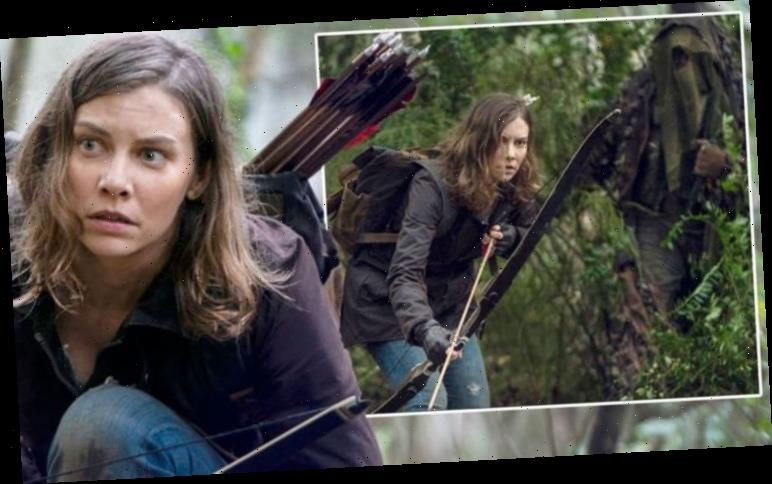 Maggie (played by Lauren Cohan) made her highly-anticipated return to The Walking Dead universe in the show’s initially-billed season 10 finale last year. Reuniting with the likes of Daryl (Norman Reedus), Carol (Melissa McBride) and  – most intriguingly – Negan (Jeffrey Dean Morgan), Maggie’s comeback after so many years away is bound to be full of dramatic twists and turns. However, it looks like she’ll be facing challenges besides trying to get back in her old pals’ good books as a camouflaged figure looks to be tracking her down in a first-look snap.

Maggie made a rather dramatic comeback in season 10, episode 16 as she lent a helping hand to Daryl and co in their war against the Whisperers.

Of course, the gang managed to see off the flesh-wearing villains once and for all, with Maggie almost singlehandedly saving the life of Gabriel (Seth Gilliam).

By the time the episode drew to a close The Walking Dead favourite had reconvened with Carol and a number of members of the group, although AMC viewers didn’t get the monumental reunion they may have been expecting.

Instead, Maggie’s future, the reaction from her pals and explanation as to where she’s been all these years was left up in the air, ready to be addressed in the extra season 10 episodes. 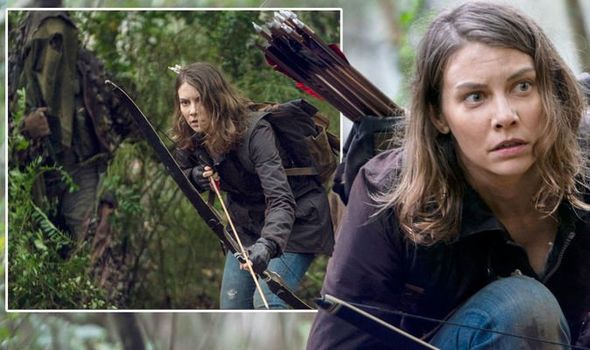 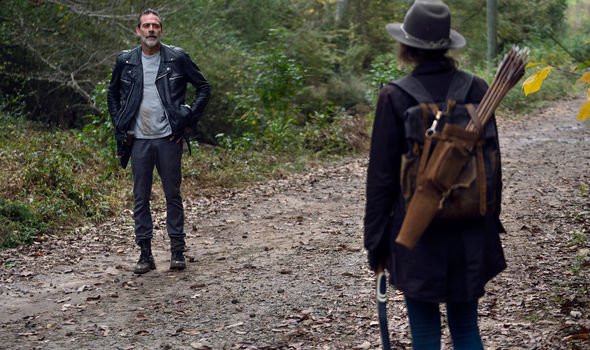 And while a virtual table read released last year showed Maggie along with Negan, Daryl and Carol coming to terms with what’s happened between them all, a promo image hints danger isn’t far away either.

In one of the snaps, Maggie can be seen with her bow and arrow in hand patrolling the woods.

She’s visibly distressed and on edge as she slowly makes her way through the terrain, as if hunting something or someone.

But behind her lurks a mystery camouflaged figure, adorned in a grass-coloured coat and green mask with eye holes. 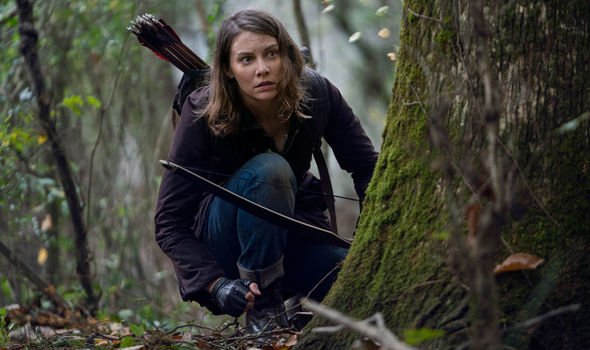 He also appears to be clutching a weapon – but will he use it against Maggie?

The promo has left a number of fans fearing so, with one voicing on Twitter: “What’s that creepy thing behind her?”

“That person in the back doesn’t look friendly!! Guerilla warfare,” added a second.

“WHAT THE F**K IS THIS???” queried another fan who shared a cropped image of the masked man, with a fourth weighing in: “Why they all covered like that!” 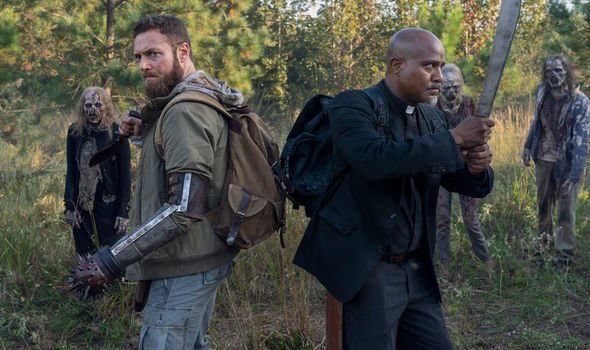 But who could the unknown person be? Guesses have ranged among the TWD fandom from Negan, comic book favourite Elijah, and even the possibility of Rick Grimes (Andrew Lincoln).

Fans will have to wait for The Walking Dead’s return to find out for sure but another first-look hints it could be a Whisperer.

Despite losing their leader Beta (Ryan Hurst) in the war, a separate image shows Aaron (Ross Marquand) and Gabriel surrounded by a group of Walkers – but are they all the dead?

The pair look understandably cautious as Aaron raises his blade and Gabriel arms himself with a machete.

But on closer inspection, it’s hard to rule out the possibility that there may be one of two Whisperers lurking.

And given what they’d just witnessed at the battle, surely they’d be on the hunt for vengeance.

Whoever happens to be lurking behind Maggie in the promo snap, fans will be hoping she makes it alive to see out the 11th and final season next year.

The Walking Dead season 10C premieres on AMC on February 28 and FOX UK the following day.