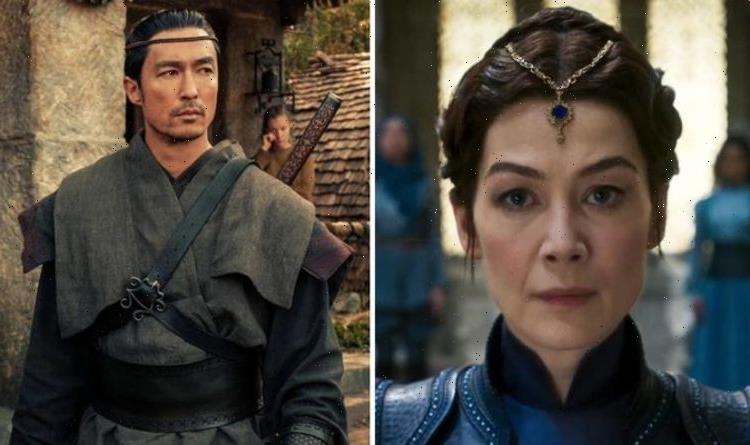 The Wheel Of Time: Rosamund Pike stars in trailer

The Wheel of Time has arrived on Amazon Prime Video with the first three episodes released on Friday, November 19. The fantasy show is based on the book series by Robert Jordan, with Brandon Sanderson as a co-author for the final three novels. More than three decades later and their creation is being brought to life on the small screen.

Who does Rosamund Pike play in The Wheel of Time?

Rosamund plays Moiraine, a member of the Aes Sedai, a magical organisation made up of women with mystical powers.

She is given the mission of finding the reincarnation of the Dragon, someone who is either destined to save or destroy the world.

With this in mind, Moiraine takes five young people on a journey, one of which she believes could be the Dragon.

There may be plenty of magical moments to come for viewers but everything didn’t exactly go according to plan on set.

Why was Rosamund Pike rushed to hospital?

Actor David Henney will be starring opposite Pike in the fantasy series as warder Lan Mandragoran.

During one scene with the 42-year-old actress, Henney uses a real sword as a prop and one “mistimed” step led to a trip to the emergency room.

Henney explained to Hello!: “The second week of shooting, Rosamund and I, we mistimed a step.

“I use a real sword for balance and I sliced her hand and she screamed, and she fell, and she jumped into an ambulance and I jumped into a car and we hit the nearest emergency room in the countryside in the Czech Republic

Henney continued: “We spent our second week together trying to find an X-Ray tech to get her bone X-rayed to make sure our show wasn’t totally screwed and it was a real bonding moment, no pun intended.

“It was a real chance for us to get to know each other.

“Long story short, everything turned out fine but it was a special night.”

But with real swords and magic at play, The Wheel of Time is expected to go down a hit with fantasy fans.

When is The Wheel of Time released?

The Wheel of Time season one premiere on Friday, November 19, on Amazon Prime Video.

The first three episodes are now available to watch on the streaming service.

Subscribers will be able to enjoy a new instalment of the eight-episode season every Friday when they are released.

As long as there are not unscheduled breaks, the finale of The Wheel of Time will be out on Christmas Eve.

There is no need to wonder about the show’s future on Amazon Prime Video either.

The streamer has already given the green light for a season two of The Wheel of Time.

In fact, filming is currently underway so fans could expect to see its return sometime next year.

The Wheel of Time is available to watch on Amazon Prime Video.