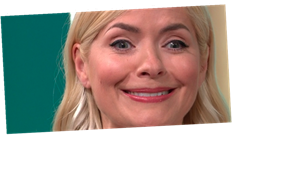 This Morning presenter Holly Willoughby gathered her nerves in the ITV studio today, as she offered up her ears for piercing.

Holly and co-host Phillip Schofield were joined by a professional piercer on set, as they discussed the trend of ear-piercing for the over-30s.

Even though she got her ears pierced in her teens, Holly admitted she always struggles to get earrings through her lobe, as the holes have closed up.

Every Sunday night she is forced to don earrings for Dancing on Ice – and she has been growing tired of battling the pain.

She explained: "The reason I'm doing this is I had my ears pierced when I was 12 or 13. Apparently, if I do them properly they'll last."

Lying back on the surgical chair, she removed her earpiece – named a "wizzy" – and geared up for the piercing.

With her eyes clenched, she asked: "Is it painful?"

The piercer replied: "It's at worst a pinch."

Growing even more nervous, Holly asked: "Do people pass out ever?"

Nodding her head, the piercer admitted "it has happened," before she plunged the needle into Holly's ear.

With the camera zooming in on her face, Holly squealed through clenched teeth, clearly feeling the pain.

The piercer informed her she would have to wait six weeks to remove the accessories from her ears – meaning she'll be wearing the triangle studs on this week's Dancing on Ice.

Later, Phillip remarked: "It was slightly more painful than you thought it would be."

When Holly admitted her ears felt "slightly hot" still, Phillip joked he was relieved he wouldn't have to listen to her forcing earrings through her lobes for every session of Dancing on Ice.

He quipped: "I'm so sick of hearing the screams!"

This Morning airs on weekdays at 10am on ITV.