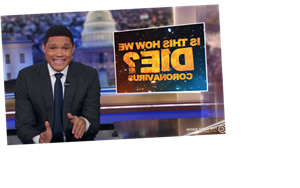 While giving an update on the outbreak, Trevor Noah examined the chances of President Trump getting COVID-19 on The Daily Show Monday.

“Trump can’t afford to be misinformed about corona,” the host said, noting the misinformation he’s spread on the outbreak. “Not just because he’s president, but because as an older man who’s not in great shape who spends his time touching strangers — he’s definitely at risk. He could be incapacitated, or worst of all, he could be trapped in quarantine with Ted Cruz.”

Noah also took a jab at Trump’s ridiculous assertion that scientific knowledge is genetic. “I like this stuff, you know, my uncle was a great person,” Trump said in a news clip. “He taught at M.I.T. for a record number of years. He was a great super genius. I like this stuff, I really get it. People are surprised that I understand it. Maybe I have a natural ability. Maybe I should have done that instead of running for president.”

“Yeah, maybe you should have done a lot of things!” Noah quipped. “I’m not sure that Trump has a natural ability for science, especially considering that he thinks scientific knowledge can be passed down through his uncle.”

Noah also gave a breakdown on the lockdown in Italy, as well as in the States, where Republican members of Congress have put themselves in quarantine. “If it turns out multiple people in Congress have corona contact, they might have to send all of Congress home,” he predicted. “Which would be a disaster, because if there’s no one in Congress, then who would be left to not pass any laws?”