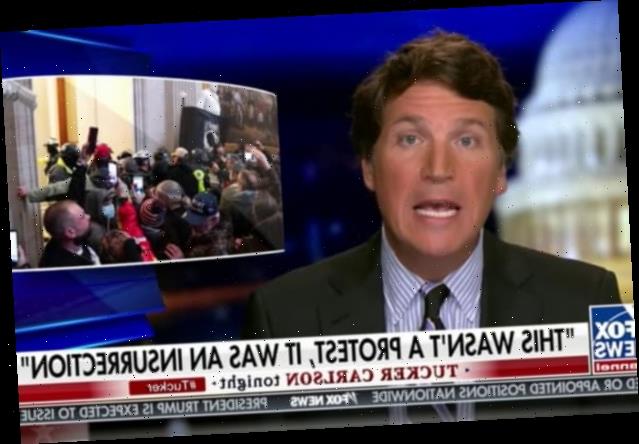 Tucker thinks it’s silly that everyone is so worked up about the attempt by a conservative mob to seize control of the U.S. government

Tucker Carlson was extra animated on Tuesday night, with the Fox News host shrieking hysterically throughout his opening segment. The subject of his ire this evening? He thinks all the hullabaloo about the coup attempt by Trump supporters on Jan. 6 is overblown.

During the segment, “Tucker Carlson Tonight” pulled up a montage of TV news folks suggesting that the government should put together a commission akin to the one that helped put together the full picture of what happened on 9/11.

“I think this is a big enough threat and attack on the center of our democracy that it’s going to need a look that spans branches of government, something closer to a 9/11 commission,” former FBI director James Comey said at the end of the montage.

Tucker thought the idea was a joke, even though the insurrection resulted in seven deaths, might have involved support from Capitol police and a Republican member of Congress and, well, saw a violent mob have free rein to do whatever they wanted in congressional offices for several hours.

While it may have mostly looked like a bunch of folks milling around not doing much on live TV while it was going down, further videos and accounts from those inside have made it clear that the situation was far more serious than most may have realized in the moment.

But Tucker has been too busy downplaying the whole thing to worry about that.

“Well, I think we know they’re on the same email chain. But that doesn’t change the substance of what they just told you. Did you hear Jim Comey, another noted moral authority? What Jim Comey told you is that what happened in Washington on January 6th, that Chewbacca guy stumbling around the House floor and all of it, that was this generation’s 9/11,” Tucker whined.

“And in fact the magnitude of that atrocity begs for a better name. So from now on we’re going to call it 1/6. And that day will live in infamy for all time. Your grandchildren will get the day off from school every January 6th in remembrance of the horror that took place.”

Schools do not close for 9/11. Nor do they close on Dec. 7 — when the Japanese bombed Pearl Harbor — which Tucker was likely referencing with that comment about how “that day will live in infamy.” But spitting out half-formed thoughts is Tucker’s whole deal.

Tucker then sarcastically suggested we refer to Jan. 6 as “Insurrection Day” before his show pulled up anther montage, this time featuring members of Congress referring to the insurrection against the government as an insurrection.

After this nonsense, Tucker dramatically mischaracterized a Black Lives Matter March in New York on Monday night that ended with violence after police aggressively went after the protesters. Tucker implied that the march, which involved a few hundred people walking around outside until police decided to shut it down for no reason, was pretty much the same thing as thousands of conservatives storming the U.S. Capitol and threatening the lives of members of Congress.

Last year, a judge ruled that Tucker Carlson has no credibility, and that viewers should not expect him to discuss “actual facts” on his show.

You can watch the quoted portion of Tuesday’s episode of “Tucker Carlson Tonight” in the video embedded up at the top of this article.