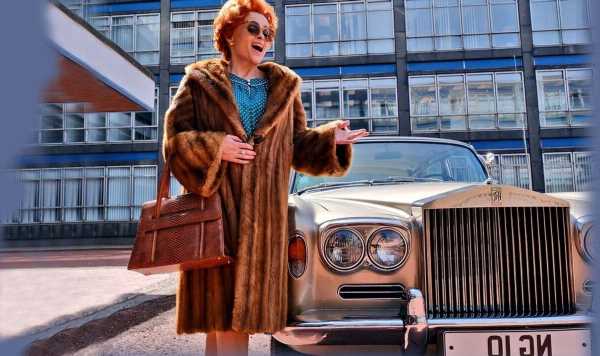 Russell T Davies is raging. The acclaimed TV writer is livid about Government cuts to arts education in schools. He’s got a platform and he’s not afraid to use it. Fired-up and on his soapbox, he is giving the Government both barrels. “The lack of arts and drama in schools is creating a gulf that we will pay the price for in 10, 20, 30 years’ time,” he fumes. “The underfunding of these vital things – what’s the point of this vandalism game?”

We’re talking today about his new show, Nolly, of which more shortly, but it would be a mistake to expect any conversation with Russell to be a bland bit of PR. Indeed, he sees reduced funding for the arts in general as a threat to our cultural well-being.

“The people who are taking away the funding of these huge, brilliant theatres are no doubt the very same people who then go and have a picnic at Glyndebourne.”

He is equally furious about the way the Government handled its controversial proposal to privatise Channel 4 last year, a scheme which has now been quietly shelved.

The 59-year-old continues: “We are all in the hands of public schoolboys playing some vast Eton Wall game. They play with us when they announce that they’re going to sell Channel 4, and ignore all opinions and financial and business advice.

“Then they change their minds. The waste! Good people doing good, diligent work wasted months of their lives defending Channel 4.

“They burnt the midnight oil, rallying the troops, only to discover that it was all a game. It was never really going to happen. It wasn’t viable. But they can waste our time because they’ve got the power to.

“What a load of rubbish that was, led by grinning idiots knowing exactly how they are playing with us.”

Now the writer is fearful that, despite the Government back-tracking on Channel 4, they may still attempt to privatise the BBC.

“That threat hasn’t receded. The BBC will be the next to be attacked. They’ll come for the BBC in the end. First, they came for Channel 4, and I did not speak out…”

As is swiftly apparent, Russell is a compelling, outspoken voice in a world where people are often too afraid to express strong opinions.

Sipping tea in central London, he is a gigantic presence – literally 6ft 6in – whose charisma fills the room. He is just about the most successful writer currently working in British television.

Over a garlanded 35-year career, he has created everything from the highly influential, ground-breaking gay drama Queer As Folk (1999), to the intergalactic hit regeneration of Doctor Who (2005) – a drama he has just returned to helm.

Now Russell has turned his attention to a completely different, but just as fascinating subject. He has written Nolly, an absorbing, poignant and hilarious three-part ITVX drama about the one-time queen of the soaps, Crossroads star Noele Gordon, played with a beguiling mixture of humour and hauteur by Helena Bonham Carter.

Younger readers may struggle to recognise the name. Indeed, Russell jokes, when he first pitched the idea of a drama about Noele Gordon, an ITV executive asked: “Who’s he?”

But at the peak of her fame, Noele – or Nolly, as she was known to all her friends – was one of the best-known faces, not just on television, but in the entire country.

Crossroads was a teatime sensation for a quarter of a century, watched by 18 million people. (Russell has previously revealed that, as a super-fan, he wrote a full script for the show just days before it was axed.)

In 1975, an-eyewatering 10,000 people turned up at the church to witness Meg’s wedding being filmed. On eight separate occasions, Nolly picked up the TV Times Award for most popular television actress.

Regarded by some as a prima donna, she drove a Rolls-Royce and was rarely seen without her fur coat and sunglasses.

She was fantastically grand on set as well.

As portrayed in Nolly, she arrived at the ATV Studios in Birmingham and declared of a tardy fellow actor: “I think Pamela is going to be late. I drove past her at the bus stop.”

Nolly was notorious for being demanding with the crew and changing the script at the last minute. She explained to the terrified producers why she was rewriting an episode during rehearsals: “I’m making the show better, even if I have to haul it out of the grave line by line.”

But she only behaved like a star because she was one. In addition, Nolly was very sharp-witted. For example, she once reminded a colleague that his last job as an actor was as a Dalek, “Which, God knows, was a stretch of your emotional range.”

Despite this, she was widely adored by her fellow cast members.

Then, out of the blue in 1981, at the height of her celebrity and the peak of Crossroads’ popularity, she was fired without warning or explanation. ATV executives did not even have the decency to take the then 61-year-old actress out for lunch to let her down gently.

The sacking was front-page news. Angry fans protested outside ATV’s offices, and the executive responsible for her firing received many bags of irate letters.

I think Pamela is going to be late. I drove past her at the bus stop

Outraged by the overt misogyny of the men who had summarily dismissed her, her loyal colleague Susan Hanson – who was Crossroads’ Miss Diane and is played in Nolly by Chloe Harris – urged her friend to: “Take centre-stage and beat these bloody men!”

At an impromptu press conference, Nolly announced to the media: “I’ve been brutally axed and my heart is utterly broken.” She went on to tell an ATV reporter: “You wouldn’t have a job if it wasn’t for me.”

Nolly had many other remarkable strings to her bow. She was the first woman to be on colour TV, filmed in 1938 by John Logie Baird, no less. She was also the first woman ever to conduct a TV interview with a sitting prime minister (Harold Macmillan). She was an indomitable force of nature.

Nevertheless, Nolly was devastated by the treacherous blow of her firing from Crossroads. She told her old friend Larry Grayson (Mark Gattiss in the drama): “Now I have stopped filming, I’ve got nothing.”

Nolly makes for an extraordinary portrait of an extraordinary woman. “Playing her has been useful because she legitimises my bossy side,” says Helena. “I’ve loved having her around, although I don’t think my family has. I honestly didn’t particularly know Noele Gordon until I read Russell’s script. And then she came into my life like a life force – straight from page one. She just fizzed off the page.

“I thought, ‘Why the hell have I not ever been aware of her before?’”

The 56-year-old actress continues: “She was such a sensational woman. She was on Russell Harty’s chat show the night she was sacked. She came on and she sang Some People with such a lack of apology and such gumption and fierceness. I thought, ‘Wow, we all need a Nolly in us!’”

Nolly was unapologetically tough as well. “She called it how it was. She was really appallingly badly treated, and she said exactly what she felt. She wasn’t going to be bullied. Any other person might have crumbled at that moment, but she didn’t.

“I loved it when Russell told me, ‘Look, I just feel she was treated dreadfully and we need to give her a proper send-off.’ I love that humanity which inspired him to write it. It brings back those people who have gone and who still have a lot to teach us.”

The drama argues that the root of this very public humiliation lay in a deep-seated sexism directed towards Nolly. The exclusively male executives behind her dismissal were resentful and perhaps even frightened of her power and popularity. The people who were supposed to be looking after her were actually stabbing her in the back.

Russell explains: “Part of what I wanted to write about was the #MeToo Movement, which is obviously excellent. But that’s limited to sexual behaviour, and women’s treatment at work goes beyond the sexual. There doesn’t have to be any physical impropriety involved. So many women are treated badly simply because they’re women.

“Would Ken Barlow in Coronation Street have been treated like that? Never! Why did Nolly scare them? Why did they feel undermined by her? And the saddest part of all is that nothing has changed.”

The writer adds: “Nolly is still very much spoken of as a diva, and yet when I spoke to the cast, the opposite picture came out. They very much loved her. A very powerful, successful woman is spoken about as a bitch.

“She’s called opinionated, and you’d never use that word for a man. How does that automatically happen? It’s monstrous!”

Nolly is a terrific celebration, not only of a wonderful life but of the enduring cultural impact of soaps. Russell says: “Soaps are beautiful and as important as a good book. In a soap opera, you might watch two actors who have barely learned their lines and you think you’re watching Cathy and Heathcliff.

“The first three years of EastEnders, for instance, were operatic. The night Jan turned up at the Queen Vic and met Angie for the first time was the height of emotion for me. It’s burnt into my mind in the same way great novels and great plays are.”

Russell reflects on what he hopes viewers will take from Nolly. “I hope it’s a fitting final bow. I hope people remember her with a smile. No matter how much we have talked about the bigger issues in the drama, it’s also enormously fun and celebratory. But I think your heart will break at the end.

“A lot of the Crossroads cast have seen it and they are delighted with it. That’s the compliment I was after. Never mind you cynical press people with your terrible reviews – I wanted Susan Hanson, aka Miss Diane, to be happy with it, and she is.”

The writer closes by musing on the scale of Nolly’s popularity: “In the late 70s and the early 80s, there was Margaret Thatcher and there was Nolly. They were the two most famous, non-royal women in the country.”