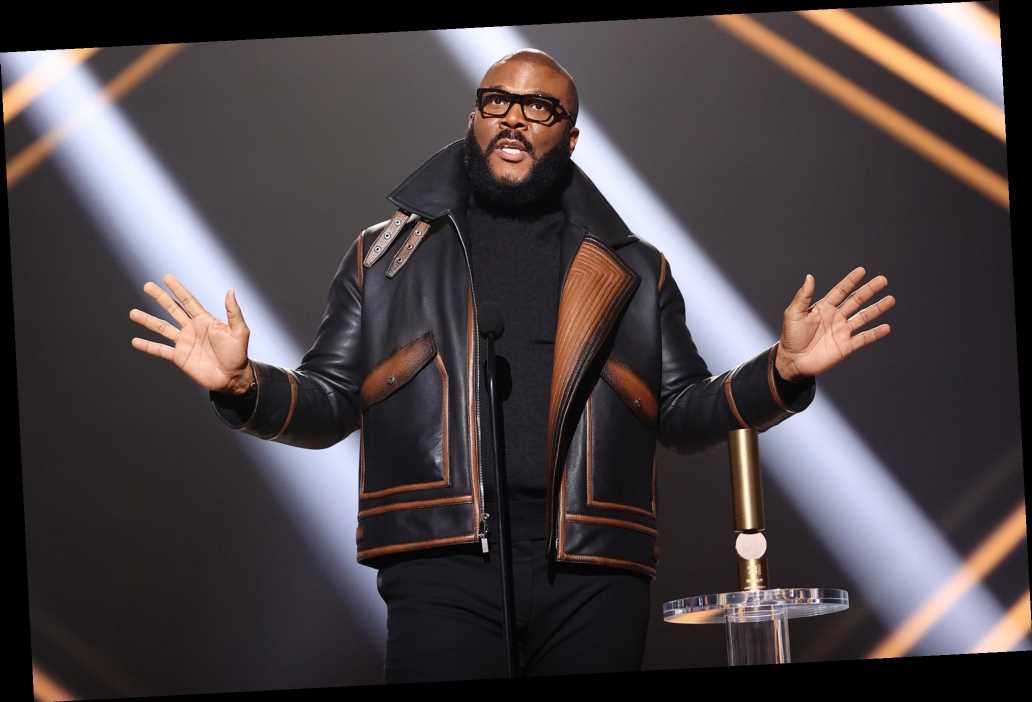 Tyler Perry is the people's champion!

The writer, director and actor, 51, was honored with the People's Champion Award, which was presented to him by Tiffany Haddish, at the 2020 E! People's Choice Awards on Sunday. P!nk was presented the honor in 2019.

"I'm so inspired and moved by this moment. I'm grateful. When I think about all these people, these underdogs, some former prisoners in jail for 20 years, one in jail for seven, they always inspire me," Perry said after he was surprised by the Tyler Perry Studios staff who appeared virtually before his speech. "So when this pandemic hit I knew I needed to do all I could to make sure they could continue in this great place that they're headed towards in their lives, in their marriages, businesses that they started for themselves, and their own companies and their houses, sending their kids to school."

The honor comes after Perry opened his own movie studio, Tyler Perry Studios, a 330-acre lot in Atlanta valued at $280 million where he films TV shows and movies, all of which he owns.

Also during his acceptance speech, Perry recalled a story about his encounter with an engineer who helped him dig a well at his Atlanta home. "Why am I telling you this, why am I talking about digging for water? In this world, we're all digging wells. In our lives, we're digging wells. We're digging wells in relationships, where we put all this time and effort and energy, and sometimes it doesn't give us what we need. We put all our time, energy and dreams in our business and it doesn't give us what we need or what we were after. But if you just keep digging, my God if you could just hear me right now, just keep digging," he said.

"You may be four inches away from every gift and every blessing that you ever wanted in your life. Had I given up, when I was homeless, when I was sleeping in my car, when I was hungry, had I given up, these people that you see on this screen right now would not be a part of my dream. There are people who are tied to your dream and your destiny, and you are worthy of getting to your goal. Keep digging, don't stop," Perry shared.

"When you get there, when you get to that water and you see it coming and you know what you need, this is what I always want you to remember, make sure everybody that you run into meets you at your worth," he concluded.

In September, Perry’s fortune was officially set at $1 billion by Forbes.  The outlet reported Perry has earned more than $1.4 billion in pretax income since 2005 and added him to the billionaire's list.

He joins other celebrities like close friend Oprah Winfrey ($2.5 billion), rapper and music mogul JAY-Z ($1 billion), Kanye West ($1.3 billion) and more. The list is currently topped by Amazon CEO Jeff Bezos, whose net worth is estimated at $205 billion, followed by Bill Gates, the co-founder of the Microsoft Corporation, at $94 billion.

According to Forbes, the actor, director and producer also has a stake in the streamer BET+, $300 million in cash and investments, $40 million in homes and various possessions and a whopping $320 library of his content.

The Madea creator has also become one of the most charitable celebrities, often quietly helping his own community in Atlanta as well as people whose stories draw his attention. In July, Perry gifted 1,000 Kroger gift cards to those living in Atlanta with help from police officers at the Atlanta Police Department who went door to door in neighborhoods to hand them out.

And in August, Perry donated a van to an Atlanta’s women’s organization that provides hygiene products to people experiencing homelessness.

Perry has made instances of racial injustice a priority in his community outreach. Earlier this summer, he wrote an essay for PEOPLE's cover story following the killing of George Floyd by a police officer.

“The level of racism and brutality that George Floyd faced is something that we as black people know all too well. When I saw that video, I had so many raw, guttural emotions. I felt for him and his family, I felt for all of us as black people, I felt for my five-year-old son,” he wrote, mentioning the video taken of Floyd's killing. “As I watched with tears in my eyes, it brought back a flood of years of emotions from carrying what feels like the weight of racism on my neck.”

Due to the airborne transmission of COVID-19 and case spikes across the country, the CDC advises against indoor gatherings of large groups, and recommends six feet of distance and face coverings at all times.