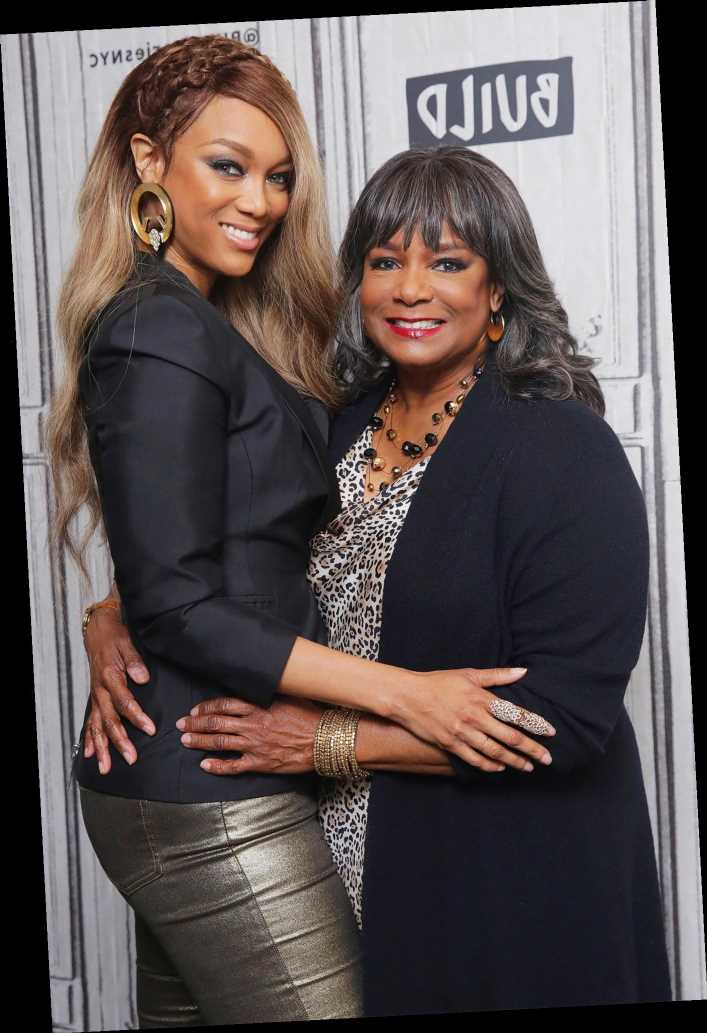 Tyra Banks has one very special person to thank for her new role as host on Dancing with the Stars — her mom!

While appearing virtually on Thursday night's episode of The Late Late Show With James Corden, the 46-year-old model revealed that her mom, Carolyn London, encouraged her to accept the hosting gig on the hit ABC dancing series.

Sharing that DWTS producers got in touch with her earlier this year and asked if she was interested in hosting, Banks said that she was shocked when she got the call.

"'You're calling me and asking me this? I would never in a million years think that I'd be asked to host," she recalled saying at the time.

"So it took me months. I sat on it for months," she added. "I asked friends and finally I asked my mom."

"She was like, 'Girl, I'm the first person that told you about that damn show! I told you to turn on the TV. The stars is dancing,'" Banks continued. "She was the first person to tell me and I turned it on and couldn't look away. And so I said, 'Yeah, I think I can bring something to this.' I feel like I made the right decision." Banks' new gig marks the first time the show has brought on a Black female solo host, with the television personality saying of the opportunity, "I like breaking these doors down so that we don’t have any more firsts, but it’s nice to be first so that you can open that door and let so many people in after you."

But despite the new gig, Banks has been open about the criticism she has faced for her performance on DWTS since the start of the show. Last month, she addressed those critics in a TikTok video.

"Tonight I hosted the second episode of Dancing with the Stars … and yeah, it wasn't perfect," the TV host said in the video. "Yeah, I had a lot of fun but I messed up, I said the wrong words, but I kept, kept going." While speaking to reporters during Day 2 of ABC's virtual fall press day on Wednesday, DWTS executive producer Andrew Llinares said the reason for the hosting change up was "all about evolution."

"Any show like this that has been on for many, many seasons needs to continue to evolve," he said, per Entertainment Tonight. "So I think changing that host is all about evolution."

He added, "It was all about making the show feel fresh, making it feel new and make it reach out to a new audience — as well as the audience that's been there for years."

Tyra Banks On What Changes Fans Will See on DWTS: 'You Will See Togetherness' in an Unexpected Way

Llinares also noted that he believes switching from having two hosts to one has been "working brilliantly" for the show.

"I think it's really refreshed the pace of the show. It's taken it to a new place, in terms of moving fast and feeling different," he said, adding, "I think that there's a real danger when a show has been on for a long time that the audience almost gets bored of the rhythm of it. It doesn't mean that there's anything wrong with it, just that it gets a little boring."

Llinares continued: "I think it's changed the rhythm of the show in a really exciting way. I think Tyra is doing an amazing, amazing job. It's been wonderful having her energy in the ballroom and her expertise as a host in the ballroom. She's brought a new life to everything."

Dancing with the Stars airs Mondays (8 p.m. ET) on ABC.