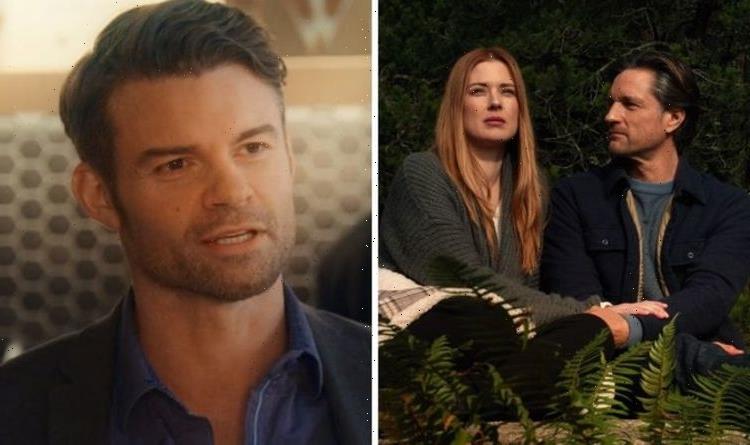 Virgin River has quickly become known for its nail-biting finales and shocking cliffhangers. Season three on Netflix was no different with the revelation Mel Monroe (played by Alexandra Breckenridge) was not only pregnant, but she isn’t sure who the father is. In an effort to ease fans pain as they await the answers in season four, Mark Monroe star Daniel Gillies has given fans a clue on who might be the dad.

When it comes to cliffhangers, no show does it better than Virgin River, with the show dropping a bombshell at the end of season three.

In the last moments of the finale, a nervous Mel sat alone with Jack Sheridan (Martin Henderson).

Jack almost proposed to Mel, but before he could she told him that she had some important news.

She revealed she was expecting, delighting Jack as he explained this was more reason to get married.

However, Mel wasn’t finished as she went on to admit she didn’t know who the father was, devastating Jack.

Now it looks like Mark Monroe could be the father, as all three seasons of the show take place over a matter of months.

Speculation was already wild, but after star Daniel Gillies gave an interview about Mark’s future in the show, viewers believe season four could be taking a completely new direction.

When asked about a possible return, Gillies said: “Here’s what I’ll say, somewhat enigmatically: the good news about being the dead husband is that you can appear at any time. I’ll leave it at that.”

This deliberately cryptic response is just adding fuel to the fire Mark is the father of Mel’s baby.

If he is, it will change Jack and Mel’s relationship forever, putting their relationship to the ultimate test.

Luckily, Jack made sure he would support Mel, telling her that he was “all in” when she explained the complicated situation.

Will there be a Virgin River season 4?

For now, season four is yet to be confirmed by Netflix, but that shouldn’t concern fans.

The streaming platform typically waits a few months after a seasons premiere to confirm another.

As the show is one of the streaming service’s most popular shows, it is almost certain the show will soon be confirmed for season four.

Fans can hardly contain their excitement for season four, with many of them posting their thoughts on the show on social media.

Another added: “I am going to need season 4 of Virgin River this week!”

Virgin River seasons one to three are available to watch exclusively on Netflix.