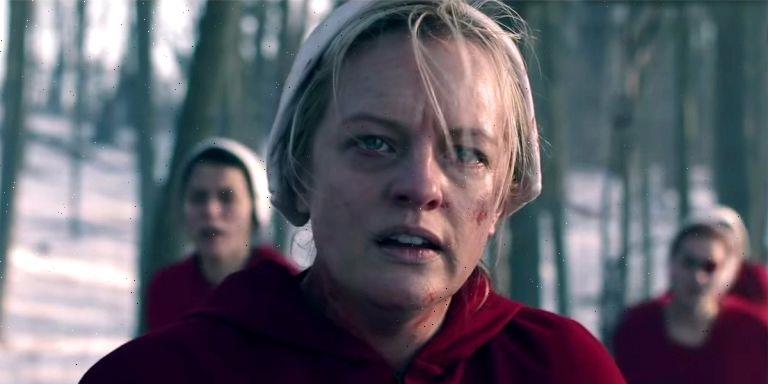 The first three episodes of The Handmaid’s Tale season 4 have dropped (praise be!) and oh my GOD is there a lot to unpack in just those first few hours. Just when you think the show can’t throw you any more curveballs, IT CAN.

Season 3 left us on a major cliffhanger with June getting shot after she managed to get a plane full of 80-something children and a few marthas out of Gilead, so the newest season really started off with a bang. Whether you’ve seen the new episodes and want to a review of everything you just witnessed, or haven’t seen them yet and are just in search of spoilers (hey, no judgement here) here’s every key moment from the first three episodes of the new season.

June and the handmaids hide out at a farm.

Post-airplane full of kids and June getting shot, she and the other handmaids are trying to hide out safely. They eventually get to a farm where they can pretend to be marthas working the fields while they figure out their next move. The wife who lives there, Mrs. Keyes, is a young teenager who just so happens to be a June super fan. She asks June a million questions about what the plan is and seems super eager to dive in, “I want to hurt them so badly—Gilead, the men.” And while all of this is going down, June is trying to recover from her gunshot wound, as is having to use things like homemade penicillin and oils.

The Waterfords find out about the plane full of children.

Up in Canada, the Waterfords, who are being held in custody, are informed of the plane carrying roughly 80 Gilead children that landed in Toronto. Fred cautions that if they don’t return the kids to Gilead, it could start a war.

Aunt Lydia faces the commanders and is stripped of her duties.

Since it’s a group of her handmaids who were responsible for getting the children out, Aunt Lydia has to face the music and is brought before a panel of commanders who inform her that her services as an active Aunt will no longer be required. Poor Lydia….JK!

Lawrence is being held and gets a visit from Nick where he repeatedly thanks him for his “service to Gilead” after a trial was held (without Lawrence even being present) where it was implied he was found guilty. He also questions Nick’s plans to invade Canada and encourages him to take a diplomatic route.

The young Mrs. Keyes opens up about being raped.

After losing it at dinner a bit and forcing Janine to eat the pig she had befriended, June lays into the young Mrs. Keyes about her treatment of these women who had already experienced enough trauma. Then, in a heartbreaking scene, Mrs. Keyes opens up to June about how her commander husband would bring in other men to let them have sex with his underage wife, saying “Wives have bad things too.” If you haven’t already watched this scene, then have some tissues ready.

Nick gets Lawrence out of jail.

Just when it seems like Lawrence is being brought to his death, Nick takes him to a room to get a shave and tells him he’s been enlisted as a consultant on Gilead’s military response to Canada keeping the children.

The young mistress has Guardian Pogue apprehended for coming onto their property and she soon reveals that Pogue, aka Johnny, was one of the men who raped her. They string him up in the barn where June has a mini Gilead-esque trial of sorts where she lays out his crimes of treason against the United States and repeatedly raping a child, and sentences him to death. She then leaves Mrs. Keyes to take care of it and is all, “Good girl,” and “make me proud,” which TBH was way too Aunt Lydia-ish for my liking.

Guardians show up at the farm looking for Pogue.

Of course when a guardian goes missing, the other guardians are going to try to find the missing guy. So they come to the farm asking to speak to the marthas. Mrs. Keyes lies and says they’re all out hard at work, so the guardians say they’ll come back later. June tells her that the fact that they’re coming back means she has to leave, so she and the other handmaids start planning where they’re going to go.

Her team advises her that the best approach is to show she was a victim of Fred’s, but Serena isn’t totally comfortable with that, saying she wasn’t abused “exactly,” whatever the heck that means.

This poor girl has been so through so much terrible crap that she begs June to take her with her while they’re planning their exit. June also finds out in this scene that Mrs. Keyes has been poisoning her disgusting husband and asks her to show her how to make the poison.

Not all the Gilead kids are happy to be in Canada.

Moira, who’s been working to reunite Gilead kids with their real families, goes to the home of one of the recently rescued kids and finds out that he is less than happy to be there. He says he misses his home, his (adoptive Gilead) parents, and his martha. Moira eventually gets Rita to go over to the kid’s house and spend time with him and make him some Gilead food so that he feels more at home.

With the poison in hand, June heads over to Jezebels and gets the women there to serve up deadly drinks to all the men in the club, carrying out what we can only assume is a mass murder.

The impossible became freakin’ possible, because Serena Joy is pregnant! While she’s being held in Toronto she has to do a health exam. They tested her and turns out she has a bun in the oven. She gets to hear the news from Tuello (aka the man who arrested her) which isn’t the most conventional way to find out you’re having a baby.

For what seems like the zillionth time, June gets recaptured by Gilead forces, but this time Nick is there to apprehend her. She gets back to the farm after her trip to Jezebels to find that it’s been totally surrounded by Gilead troops. Nick tells her that he’s trying to keep her alive and she comes with him.

June is tortured for information.

June gets berated by Aunt Lydia for taking all the children, but that’s nothing compared to the literal torture the creepy Lieutenant inflicts on her by strapping her down on a table and waterboarding her.

June calls out Aunt Lydia and she can’t handle it.

In a scene that ALMOST makes you think Aunt Lydia might have actual human feelings, June tells her that she failed at protecting the girls, letting them get raped and beaten, and she even tells her that her fave girl Janine turned on her “in a fucking second.” Lydia loses it, screaming at June to “Shut your mouth.” This lady is the definition of being able to dish it out but can’t take it.

In another attempt to get June to give up the missing handmaids’ location, the Lieutenant threatens to push two fellow handmaids off the roof. One bravely tells her not to say a thing (which gets her immediately sent to her death) while the other, much younger handmaid seems terrified but eventually comes around to the idea that she’s going to have to die to save the other handmaids, and she too gets pushed off. And when that whole stunt doesn’t work at getting June to talk, she’s shoved into a tiny box and kept there.

While sharing a meal with Commander Lawrence, he tells June that six commanders are dead and another nine are in the hospital after some “bad liquor” was served up at Jezebels. He doesn’t say it, but seems to imply he knows June had something to do with it.

June’s daughter Hannah is brought in to be dangled in front of her, with some threats that Hannah will be hurt if June doesn’t say where the handmaids went. It’s a totally heartbreaking scene because Hannah doesn’t seem to recognize her own mom and seems pretty scared of her. With Hannah being the one thing June still cares about, she gives up the handmaids’ location and they get captured.

There’s an even more effed up new kind of colony.

Lydia tells June that all the offending handmaids are being sent to a new place called a Magdalene colony, which is essentially a breeding colony where the handmaids will have to work all day and then be visited by their commander and his wife when it’s time to perform the ceremony.

June and the girls escape (again!).

The handmaids, en route to the colony, attack Lydia inside the transport van and all get out. But some of them are shot while running away. And sadly, June’s buddies Alma and Brianna don’t make it across the train tracks in time and get hit by the oncoming train. Only June and Janine make it across safely and are on the run once again.

Want more spoilers for all your favorite shows? Yeah. We know you do. You can find all of our TV coverage here.