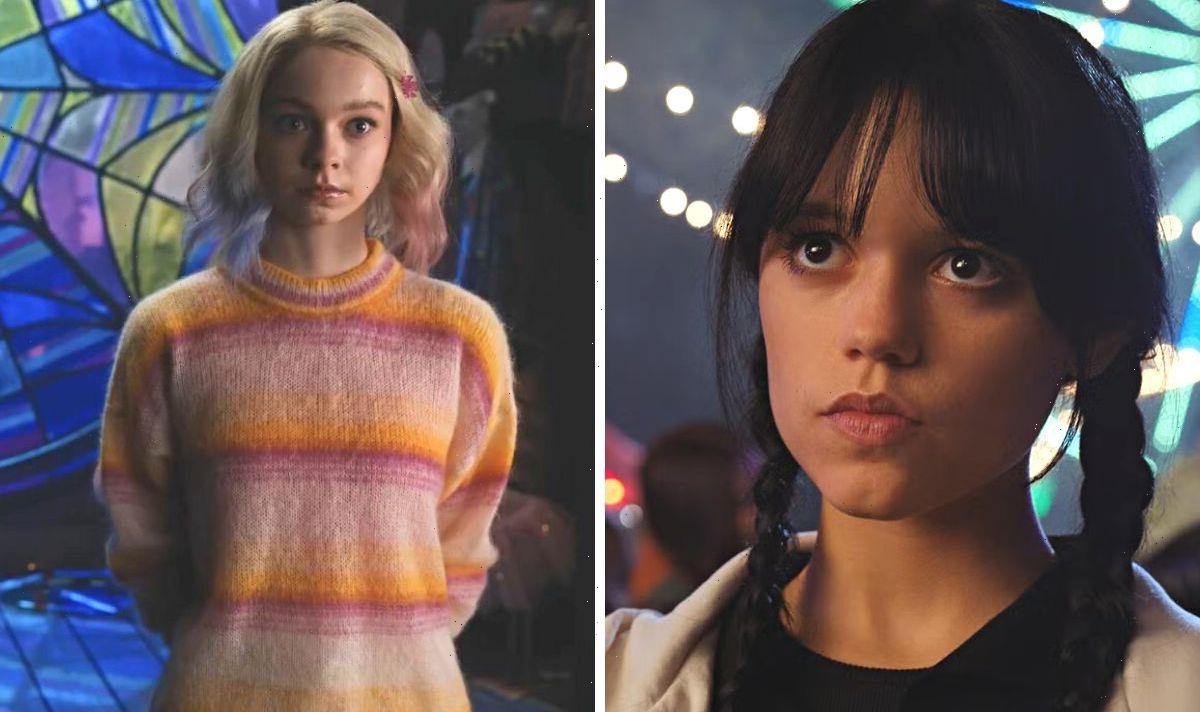 Wednesday took viewers by storm after the series landed on Netflix with a new spin on the cult classic, The Addams Family. As the series rose to record-breaking heights, the streaming giant released the show’s blooper reel which showed Jenny Ortega accidentally hitting Enid Sinclair star Emma Myers.

The fan-favourite eccentric family returned to screens with an all-new series which followed Wednesday Addams (played by Jenny Ortega).

It focused on her journey as she navigated school life at Nevermore Academy, a school for outcasts.

Although she tried to avoid social situations, Wednesday found herself embodied in a major mystery after students began going missing.

The series came to a cliffhanger ending which left fans eager to see more from the series, after a major revelation about the murderer’s identity.

As fans await news regarding the show’s second season, Netflix released a hilarious blooper reel which saw Jenna break her portrayal of the stoic Wednesday.

As well as messing up on her words, getting distracted and missing her cue, the clip included a scene which Jenna shared with her co-star Emma Myers.

During the clip, Enid was reaching through a window to catch a flashlight from Wednesday.

However, instead of landing in her hand, the flashlight flew and abruptly hit her face.

After the thud, Jenna gasped and instantly apologized for the incident.

She said: “Sorry, did I hit you in the face right now,” before telling the crew: “Hold on.”

Although, Emma didn’t audibly respond she could be heard chuckling, while a concerned Jenna asked: “Are you ok?”

Fans also took to the comments to laugh at the incident and share their concern for the actress’ face.

Attixis wrote: “Jenna hitting Emma with a flashlight will live in my head rent-free for the rest of my life.”

Kaitlyn added: “Omg yes, but also that was an aggressive hit, I feel bad, but love how Jenna stopped everything to make sure she was ok.” (sic)

During the show, Enid and Wednesday grew close as best friends after the two became roommates, despite their opposing personalities.

Unlike Wednesday, Enid was a werewolf who quickly became a fan favourite for her love of bright colours and snoods.

However, it’s yet to be seen if fans will see more of the two characters, as Netflix have yet to confirm the release of season two.

Despite this, many remain hopeful as the show surpassed streaming records, surpassed Stranger Things and became the number-one show in 83 countries.

Wednesday is available to stream on Netflix.