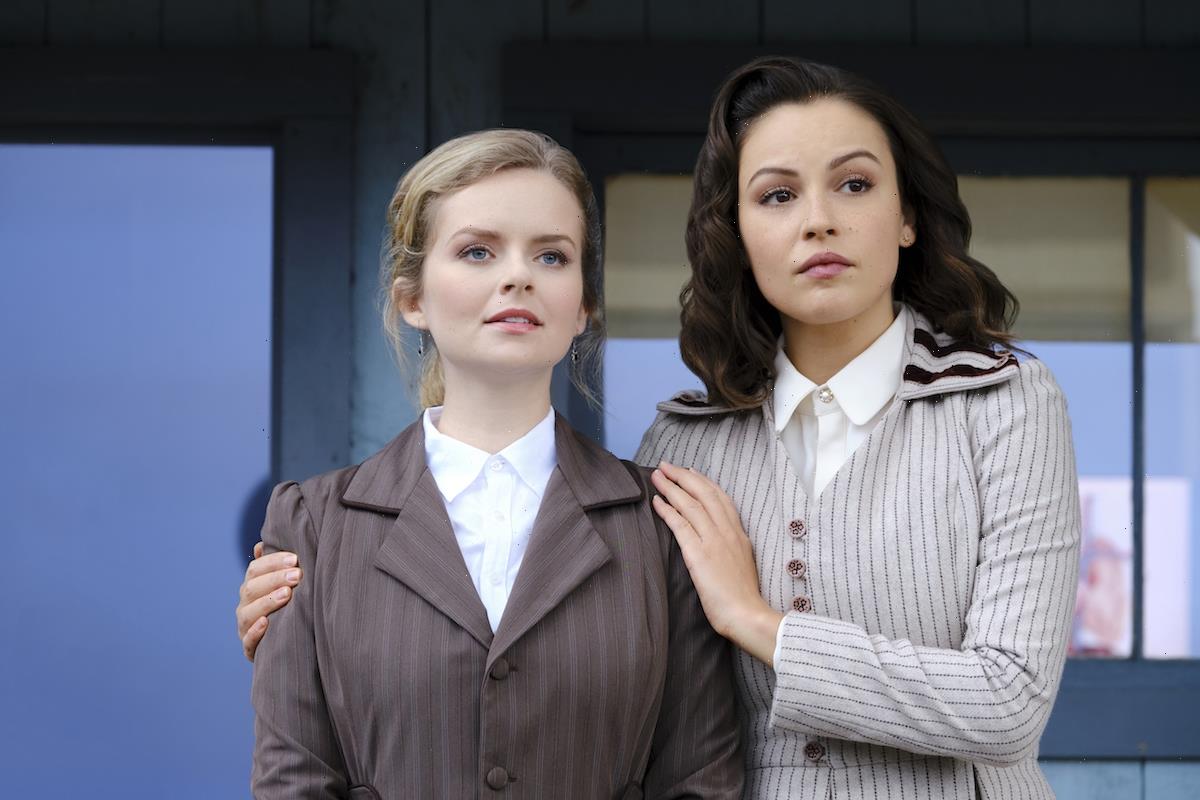 The love triangle is over. After more than two seasons of twists and turns, Elizabeth (Erin Krakow) has decided between Mountie Nathan (Kevin McGarry) and saloon owner Lucas (Chris McNally). The When Calls the Heart Season 8 finale delivered a satisfying resolution to the widowed schoolteacher’s romantic dilemma, though her choice will leave some fans disappointed. Meanwhile, other residents of Hope Valley were facing big decisions of their own in this season-ending episode. 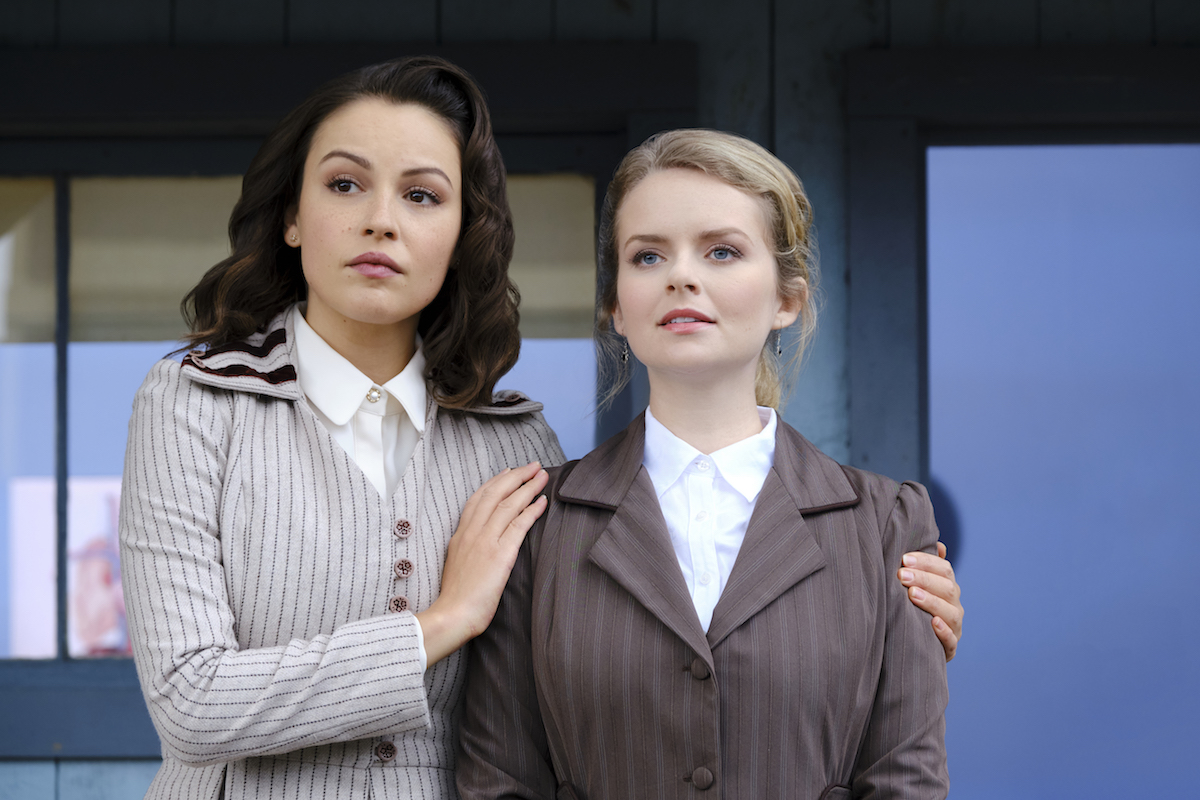 When Calls the Heart squeezes a lot of story into each episode. This season’s finale, which ran about 5 minutes longer than usual, was no exception.

As with last week, change was a major theme in “The Kiss.” In some cases, it was positive change. Rosemary (Pascale Hutton) has found her calling as the editor-in-chief of her own newspaper. Hickam (Ben Rosenbaum) gets a big promotion and moves forward with his plans for an oil pipeline, with a little help from Fiona (Kayla Wallace).

In other cases, change is difficult, though necessary. With Carson (Paul Greene) having decided against proposing to Faith (Andrea Brooks), they say their goodbyes as he leaves for his surgical fellowship in Baltimore. Carson is off to achieve his long-held dream, but it means giving up the woman he loves. (So far, we don’t know if Carson’s gone for good or if his absence from Hope Valley will be temporary.) He get a touching sendoff from his friends, but the moment is bittersweet.

Occasionally, change is unwelcome. No one is happy that Wyman Walden (Wesley Salter) is skulking around buying up properties or that a factory might be coming to town. Hope Valley’s small-town character is a key part of its identity, and it’s understandable people would get nervous when that’s threatened. We didn’t get any resolution to those issues in this episode, though the conflict sets up plenty of interesting storylines for a possible season 9. 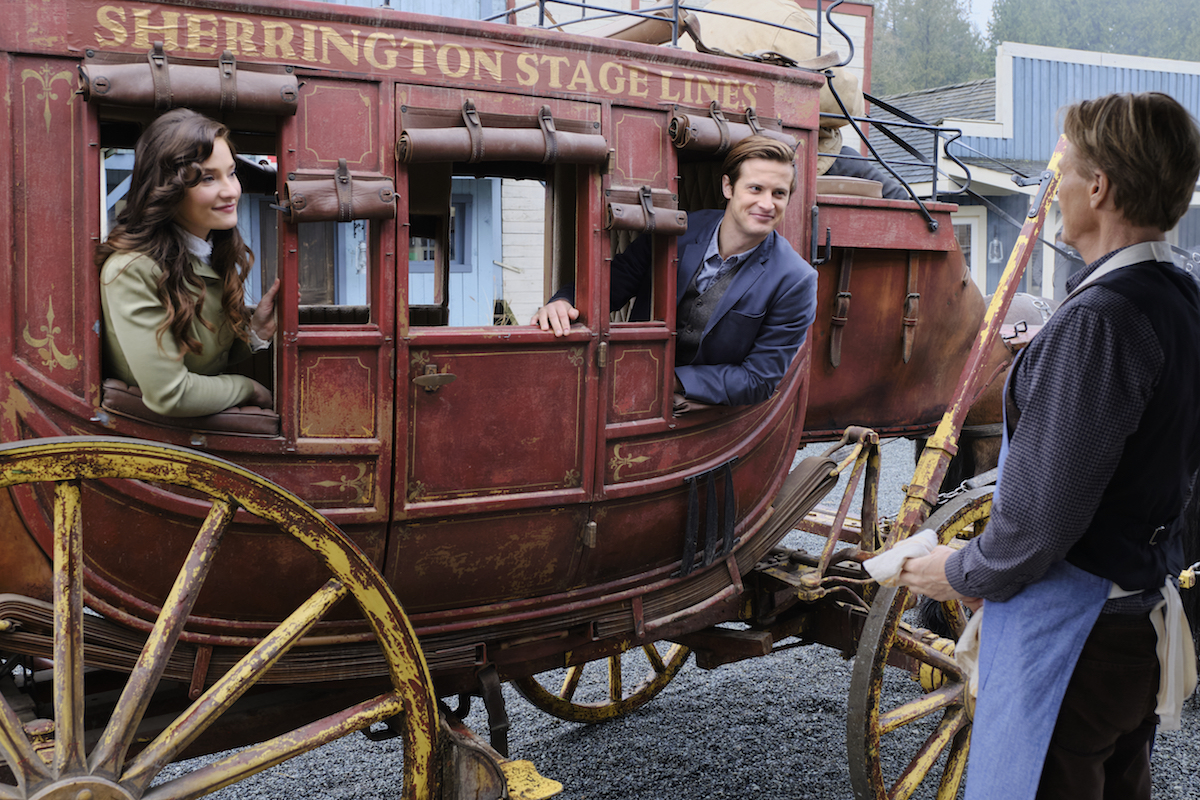 Carson wasn’t the only character saying goodbye to Hope Valley. Henry Gowen (Martin Cummins) leaves Gowen Petroleum in Hickam’s capable hands and gives Bill (Jack Wagner) some information that could help in his investigation of the mine disaster. Then, he sets out for an unspecified destination, though his face when he looks at Abigail’s Cafe suggests he hopes to reunite with the woman who he’s said encouraged him to be a better person. Is this another clue that Lori Loughlin might be returning to When Calls the Heart? It’s seeming like more of a possibility.

There were also reunions amidst the goodbyes. At the end of “Changing Times,” Jesse (Aren Buchholz) was missing and his wife Clara (Eva Bourne) was frantic with worry. Fortunately, Jesse makes it home safely and his boss Lee (Kavan Smith) feels so bad about the whole ordeal that he sends him and Clara on a vacation to make up for it.

Florence (Loretta Walsh) and Ned (Hrothgar Mathews) also reunite after a brief separation. Turns out the business Ned had to take care of had to do with filing a patent — apparently, Ned invented Band-Aids.

Last week, school inspector Landis (Todd Thomson) threatened to shut down Elizabeth’s school if she let Angela Canfield (Vienna Leacock) enroll. Elizabeth is determined to keep her promise to Angela and Minnie, but when no one shows up for the first day of classes, she fears that the other families believe (as Landis does) that having a blind student at school would make it harder for the other students to learn.

Thankfully, Elizabeth’s fears are unfounded. The entire class is late because they’ve decided to walk to school with Angela and her brother. It’s the kind of heartwarming moment that’s a When Calls the Heart trademark, and even seems to soften the heart of Mr. Landis.

Elizabeth patches things up with Rosemary

Elizabeth’s normally rock-solid friendship with Rosemary has been on shaky ground recently. Not having her BFF to turn to has been hard, so it’s a relief when Elizabeth delivers a much-deserved, if belated, apology to Rosemary in the episode’s opening moments.

Rosemary, as usual, has words of wisdom for her friend, who is struggling after Lucas ended things last week because he believed she had feelings for Nathan.

With the love triangle having dragged on for so long, it seemed possible the writers would delay Elizabeth’s decision until the finale’s last moments. Instead, the big reveal came at the episode’s halfway mark. It was a wise choice that gave us more time to fully understand and respect Elizabeth’s actions.

In a voiceover as she walks to the Mountie office, Elizabeth says that she’s allowed herself to drift between two good men for too long, which has only made the experience more painful for all involved. She’s realized she needs to be true to them, and herself. Unfortunately, that means letting one man down.

“I’ve realized that I’ve been trying to find Jack in you,” she tells Nathan. “I’ve been trying to replace him.” She loves him, but she isn’t in love with him. Nathan doesn’t say anything. The look on his face conveys pain, but not surprise.

As for Hearties, will they be surprised? There have been signs all along that Elizabeth’s feelings for Nathan were about her processing her lingering grief over her husband’s death, not a sign of romantic love. Still, for some fans, the moment has to hurt.

At this point, we know Elizabeth has chosen Lucas. However, he doesn’t know that yet. In fact, he’s been quietly making plans to leave Hope Valley.

Before Lucas closes up the Queen of Hearts for good, Nathan stops by. They share a drink and a conversation, and while it’s not exactly a friendly chat, there’s mutual respect between the two (and perhaps the possibility of future friendship). Then, Nathan opens up about what Elizabeth told him.

A resigned Nathan admits he’s not surprised by her choice. “What Elizabeth and I share, it’s not the same as what you two share,” he says. He thinks Lucas should reconsider leaving Hope Valley.

As for Nathan, will he be sticking around? We already know that whoever doesn’t win Elizabeth’s heart won’t be leaving the show. We even get a glimpse of what the future might hold. After Nathan hurts his hand (chasing after his hat, he sheepishly admits), Faith tends to his injury. There’s a quiet moment between these two people who’ve both experienced romantic disappointment, and, perhaps, a hint of a deeper connection.

A galley of Elizabeth’s book — A Single Mother on the Frontier — has arrived, and she quietly looks it over one night at home. The title is significant. On one level, it’s a reminder of her late husband; on another, it refers to a period in her life that’s likely to end soon, as she inches closer to declaring her love for another man.

At this point, we get the scene that’s been teased since before the season 8 premiere. Elizabeth looks at a photo of herself and Jack, then slowly removes her wedding ring.

The next morning, she hands Robert (Jaiven Natt) an important note for Lucas. He promises her he’ll deliver it, but it’s not hard to guess the letter won’t make it to its intended recipient.

Lucas nearly runs over Lee as he drives out of town. Soon after Robert tells Elizabeth he wasn’t able to deliver the note, and that the saloon is closed and the doors locked. A frantic Elizabeth tries to find Lucas, fearing her indecision means she’s lost him forever.

But wait! Lucas hasn’t left after all. He finds Elizabeth standing on the bridge, where they shared a moment earlier this season. They run into each other’s arms and kiss.

“Thank you for waiting for me,” she says.

In the final scene, Elizabeth pulls off the kind of romantic gesture we’ve come to expect from Lucas. She’s invited him to a private reading, but instead of reading from her book, she “reads from her heart.” She tells Lucas how much she cares for him, while he responds by declaring his feelings for her.

Elizabeth and Lucas’s journey to this point has been a long one. But now that they’re here, the romantic moment feels wholly earned. While some will be disappointed she didn’t choose Nathan, there have been numerous signs Lucas was one she was meant to be with, from his unwavering support of her writing to his patience in waiting for her to that steamy moment they shared in his office. Ultimately, it’s a romantic ending to a season filled with a lot of uncertainty and, at times, sadness for Elizabeth as she prepared to move on afer Jack’s death. And it’s one that leaves her and Lucas — and When Calls the Heart fans — with plenty to look forward to in the future.