South Australian police say a prominent ABC logo placed on their shooting range wall is there to replicate a realistic training environment and is not a reflection of police views of the national broadcaster.

A video posted by SA Police to YouTube on Wednesday shows an officer shooting a machine gun seized as part of the recent large-scale Operation Ironside targeting organised crime. 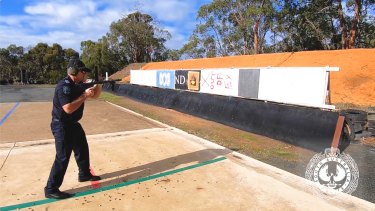 A still from an SA Police video of an officer shooting a seized weapon. The ABC logo is in the background in blue and white.

But hidden in plain sight to the officer’s left is an unusual target: the ABC’s iconic logo, which resembles a sideways figure eight but is actually a Lissajous pattern historically used to tune broadcasting equipment. Its blue and white surface appears pock marked.

“This is a mock firing range which is on private property and only accessed and used by police or other limited and authorised personnel,” an SA Police spokesman said. “Anything on display is for the purposes of replicating a realistic training environment as we have with other training facilities.”

Asked whether it was inappropriate for the SA Police to use the national broadcaster’s logo as target practice, the spokesman said: “It is not a reflection on the ABC or any other business logos displayed in the video.”

Another logo in the video appears to be from Bird in Hand, an Adelaide Hills winery. “There is no firing at the ABC logo,” the spokesman said of the 17-second video.

An ABC spokesman said the broadcaster was reviewing the video. So too are the ABC’s readers, with the video included on a story on the ABC’s website about the seizure of the weapon and foiling of an alleged murder plot linked to an outlaw motorcycle gang.

The weapon was seized as part of the international law enforcement Operation Ironside, in which authorities set up their own purportedly secure communications platform and then monitored its use by alleged criminals. Almost 100 people have been arrested and charged with offences in South Australia as a result of Ironside, the ABC reported.