When Mubarek Imam received his first COVID-19 vaccination earlier this year, there was a video doing the rounds of social media site TikTok claiming that the jab caused people to become magnetic.

“The video showed forks and spoons being used to check whether the body was magnetic or not. Actually, I had to try it myself to make sure,” said the community leader and resident of the Richmond housing estate. 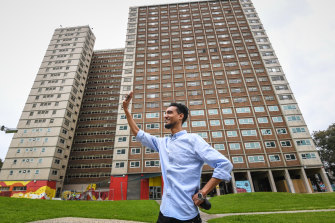 Community leader Mubarek Imam at the Richmond housing estate, where almost all the residents are now vaccinated.Credit:Justin McManus

Others living in the high-rise towers were concerned it would affect their fertility, or change their DNA. Some just didn’t yet have enough information to decide.

But in an achievement that challenges assumptions made about vaccine hesitancy and the staying power of misinformation, more than 95 per cent residents of all five towers at the Richmond housing estate, home to at least 2000 people, have now received at least one vaccination.

It’s thought that three of the towers are at 100 per cent fully vaccinated for those over 16, based on available data. The state average is 89.6 per cent.

“I think it’s absolutely extraordinary,” said local GP Ines Rio, who said she expected such a high rate would be difficult given communication and other hurdles facing the community, where many residents are from Vietnamese, Chinese, East African or Timorese backgrounds.

It was achieved as a result of a concerted effort led by North Richmond Community Health and 20 employed community members speaking more than 15 languages.

There were numerous events held – often vaccinations and conversations about vaccination were just a side act. Sometimes many people received their vaccinations, other times, none. There were baked potato evenings, youth nights with slushies and takeaway, playgroups and Zumba classes.

They knocked on doors, had vaccination information translated and organised for people’s kids to be looked after during their appointments.

They produced videos with community leaders talking about their experience getting vaccinated, hosted online Q&A’s including with the health department’s Professor Ben Cowie who was asked if the Pfizer vaccine was “better” than other vaccines.

“It’s been so deliberate,” said Laura O’Shea, who has helped lead the COVID-19 response in the high-rise towers with the health service.

“All the different communities know their communities. They’d be saying Mrs X and Mrs Y are still unsure, can I bring them to you to have a chat?

“Initially it was a more broad sweeping approach. Our objective was ‘let’s get this community vaccinated’. But as our numbers have become higher and higher, we were targeting it down person to person.”

“Our objective was ‘let’s get this community vaccinated’. But as our numbers have become higher and higher, we were targeting it down person to person.”

Mr Imam, 29, who has started a foundation supporting the aspirations of young people in the public housing towers, believes the success of the vaccination drive was that rather than taking the top-down approach, it started from the grassroots.

People who visited the vaccination centre on the estate would typically find someone from their community speaking their language. Sometimes, there would be pop-up vaccination tents that residents had to pass through at the bottom of the buildings to get home.

“I personally know three people who we were just passing by there and decided to get a vaccine quickly. Convenience made it easy.” 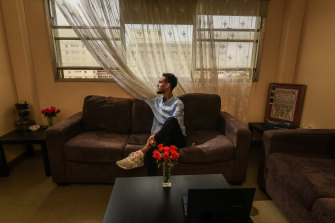 The death of four women from COVID-19 within Mr Imam’s Eritrean community in recent months was also a wake-up call, he said.

“Eritreans, I think our culture is a bit like a collective culture rather than an individualistic culture. So if you just send the message that you need to look after your parents or the elders, everybody would get on board.”

One of the very last to get vaccinated in the Richmond high-rise towers was a heavily pregnant woman, expecting her second child.

Pregnant women are more at risk of serious illness and premature birth if they get COVID-19. Still, Dr Rio hesitated for a moment when, after a number of conversations, the woman finally told her that she would get the jab, if she did it there and then.

“Eritreans, I think our culture is a bit like a collective culture rather than an individualistic culture. So if you just send the message that you need to look after your parents or the elders, everybody would get on board.”

The doctor had an unopened vial of Pfizer containing six doses of the vaccine, but only one person to give it to.

“I’m thinking to myself, is it worth doing or not? Because you might have to throw out five,” she said. “I decided at the end of the day she was so high risk that it was worth doing.”

That day, she was able to find another four willing recipients for the vaccine, including people at the nearby medically supervised injecting room.

“That’s the sort of flexibility that you need to have in a system now. Everyone easy has been reached … it’s now the hard to reach or hard to convince.”