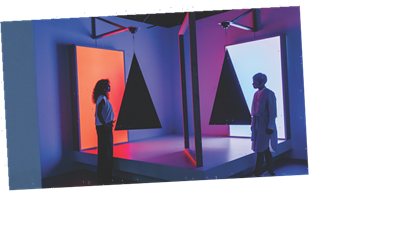 While the world was shut down in 2020, ACMI was busy working behind the scenes on an immersive multiplatform offering. 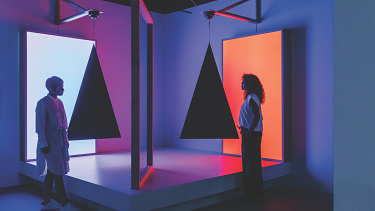 “The work we were doing during COVID had such a sense of purpose to it. We knew that we were creating something really wonderful for the people of Victoria, and to open now feels more special and relevant than ever,” says ACMI director and CEO Katrina Sedgwick.

The museum’s transformation begins with its sophisticated new look: an expansive central staircase which has increased the sense of connection between the museum’s four floors, and functions as a kind of “urban lounge room” for visitors to the space.

“It’s a place where you can come and just hang out,” says Sedgwick. “We’ve got great Wi-Fi, power that you can plug into everywhere and comfortable seating. That’s been a really key thing.”

Adding to the temptation to linger is a new café restaurant, Hero, with chef Karen Martini at the helm, plus revamped cinemas.

But perhaps the biggest update, says Sedgwick, is to the museum’s free centrepiece exhibition. Now titled The Story of the Moving Image, it’s an immersive, interactive experience that “tells the story of the past and present of the moving image from our perspective, right now in Australia,” explains Sedgwick.

The exhibition has a strong First Peoples voice, and a hyper-now section called Moving Minds, which explores everything from social media to fake news.

The Story of the Moving Image also offers the chance to edit film scenes and create soundscapes.

Central to the exhibition is the Lens, a free take-home device that allows visitors to virtually collect artworks and objects they resonate with as they explore.

“It might be the Mad Max Interceptor car, it might be a costume from The Favourite, it might be something that gets created in one of the interactive experiences,” explains Sedgwick.

“In a way, we’re creating our own kind of Google, but it’s driven by humans and not by algorithms.”

The pandemic also inspired the museum to expand its online offering. “We’ve set up a new Cinema 3 space, a video-on-demand cinema online. We created Gallery 5, which is a gallery space for digital online artworks; and an extension of the new centrepiece exhibition that’s almost an online magazine,” she adds.

But the most thrilling experiences are, of course, at the museum itself, where you can literally get a grasp on film.

One particularly special feature is the Memory Garden, which invites you to hold home movies from the ACMI Collection in the palm of your hand.

“Your hand becomes the screen and cradles those memories,” says Sedgwick. “I think that’s really beautiful.”

More in Melbourne this month

Live at the Bowl

Ocean Alley, The Avalanches and comedian Hannah Gadsby are some of the acts bringing live entertainment back to the iconic Sidney Myer Music Bowl.

This high-tech play experience takes you on an hour-long walk where your senses are treated to stunning audio-visual displays.

Catch this immersive performance at Malthouse Theatre for moving storytelling that plays out around you.