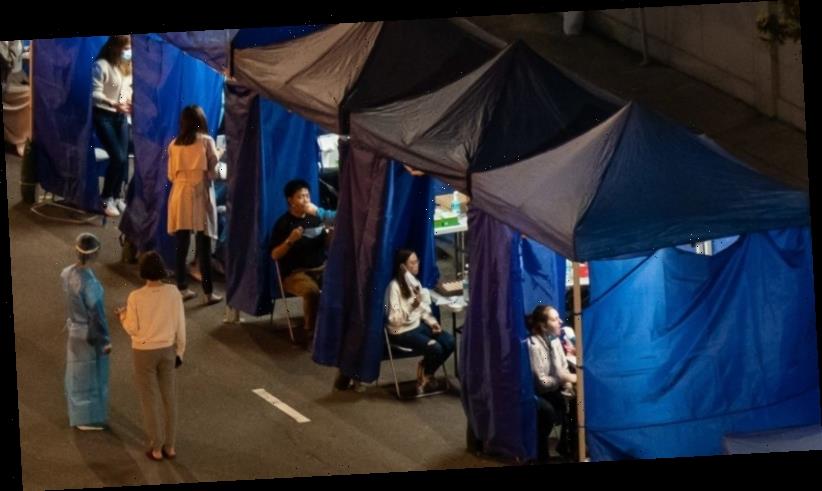 Hong Kong authorities have trapped hundreds of residents in a sudden lockdown, triggering concerns about the separation of families as the city attempts to stop a new wave of COVID-19.

The response came after a coronavirus outbreak at a gym popular among foreigners swelled to more than 100 cases at four residential towers. Hong Kong health teams set up testing stations around the apartments last week before locking residents inside their homes or removing COVID-positive residents, including children, to government quarantine centres. 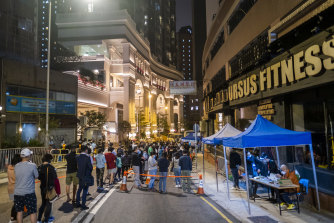 Residents wait in line for Covid-19 tests outside the closed Ursus Fitness gymCredit:Bloomberg

The measures have seen children separated from their parents, drawing outrage from locals and sections of the diplomatic community over the weekend. It is the latest in a string of developments that have sparked anxiety among expats who are still coming to grips with the implications of national security laws imposed by Beijing, new electoral laws and growing business uncertainty in the global financial hub.

The children of two US consulate workers who tested positive for COVID-19 were on Tuesday granted an exemption to join their parents in hospital instead of being sent into quarantine.

Chief Executive Carrie Lam said the exemption was authorised based on family circumstances not because of their diplomatic status. “We are a compassionate government,” she said.

Lam defended her government’s use of the “ambush lockdown” tactics in January, which have seen health authorities swarm buildings at night with no warning, sealing them off until everyone is tested.

“Efficacy does not only concern recovery rate, but also prevention of the disease,” she said.

Hong Kong, which has a population of 7.5 million, has confirmed more than 11,000 cases of COVID-19 since December 2019, and is widely considered a world leader in suppressing the virus despite its high density and international trade and traffic.

British Consul-General Sarah Robinson has urged UK expats to contact the consulate if they believe they are at genuine risk of separation from their children. Those being quarantined face a 14-day stay in an 18-square metre room with limited cooking and refrigeration facilities.

“We know there is a lot of unease in the British community in Hong Kong in light of the recent spike in COVID cases linked to a gym, ” she said on Tuesday. “Many of you, me included, are particularly worried about young children entering quarantine. As a consulate we will try to support families at risk of separation. We have also supported a number of people entering quarantine with serious medical conditions.”

The Australian Consulate in Hong Kong and the Department of Foreign Affairs were contacted for comment.

Reuters reported on Tuesday that the Facebook Hong Kong Quarantine support group said it had assisted dozens of cases of children who had faced separation from their parents in the past week.

One class of 35 nine-year-olds from the international Harbour School were told they needed to enter quarantine.

“Parents and the school have strongly requested for alternative arrangements that are more humane, with regards to the treatment of young children,” Harbour School managing director, Dan Blurton, told Reuters.

The government is also facing a public push to allow young children to home quarantine with 4700 residents signing a petition within hours of it launching on Monday. 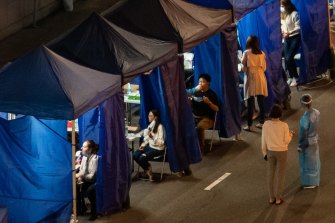 Residents receive mandatory COVID-19 test in the mid-levels neighborhood where four buildings were locked down to contain infection. Credit:Getty Images

The lockdown, which has already forced more than 700 close contacts of the Ursus fitness gym in Sai Ying Pun into quarantine, has caught many of the city’s foreign bankers, lawyers and teachers.

Teachers at the city’s international schools are also anxious about a strict new testing regime that will see them tested every 14 days as a condition of allowing schools to reopen.

“We [are falling] over ourselves in the compliance details,” one teacher said.

The teacher asked to remain anonymous because education is becoming increasingly politically sensitive in Hong Kong.

“The next letter will be demanding independent schools teach the national security law,” the teacher said.

“Curriculums will be inspected and we already see self censorship within. Naively we walked into the trap set by the political masters.”