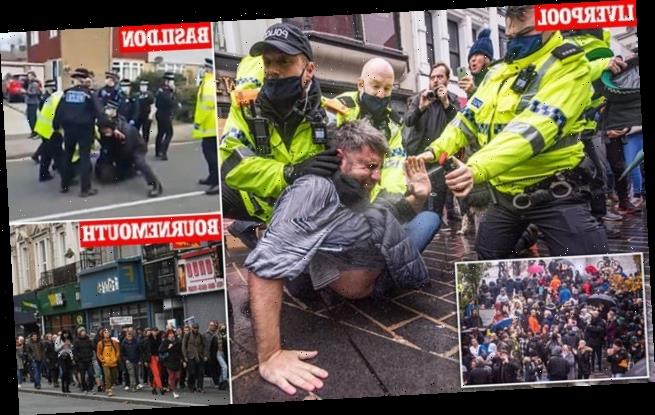 Anti-lockdown protesters have clashed with police at marches today as hundreds took to the streets in a fight against coronavirus restrictions.

Rallies were held in Bournemouth and Liverpool, where a growing crowd chanted ‘freedom’ as they marched through the city in the rain this afternoon.

The group in Merseyside have been shepherded by police, who have moved in to make arrests, with some protesters being pepper sprayed as they grappled with officers on the ground.

It is thought that the protest began at 1pm and started with around 100 people gathered on Church Street, before the group grew in size.

There were similar scenes on the south coast, with social distancing nowhere to be seen as activists marched through the seaside town of Bournemouth, holding placards reading ‘freedom’ and ‘the pandemic is over’.

It comes as Britain today recorded 391 new hospital deaths in the highest Saturday increase since May – up 21 since last Saturday. 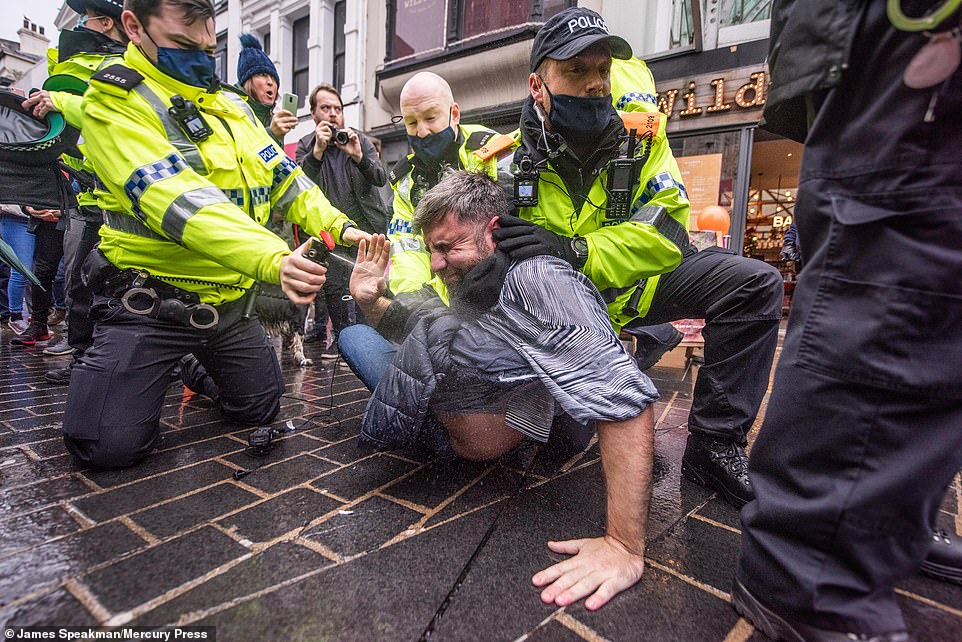 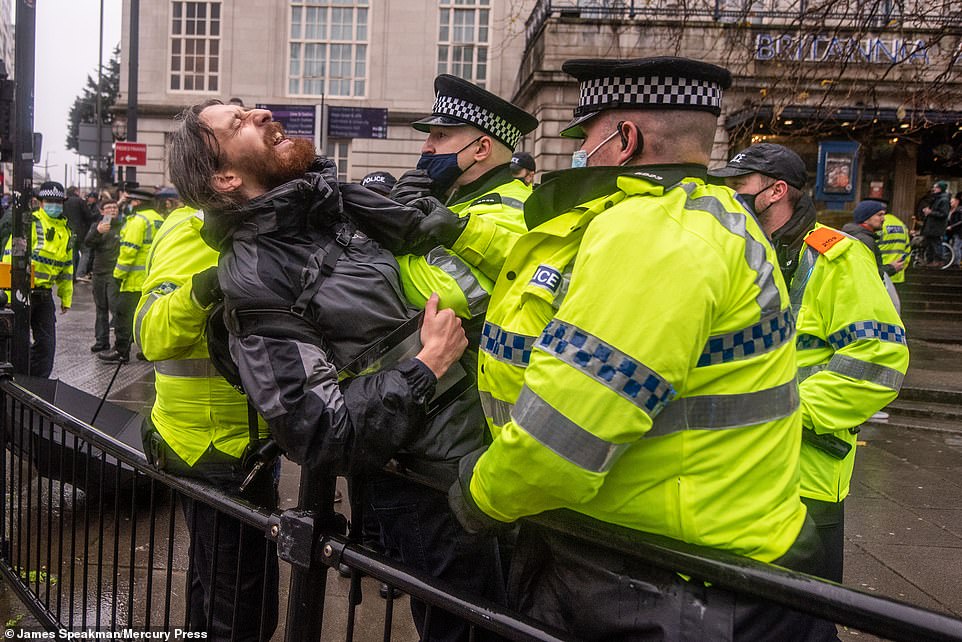 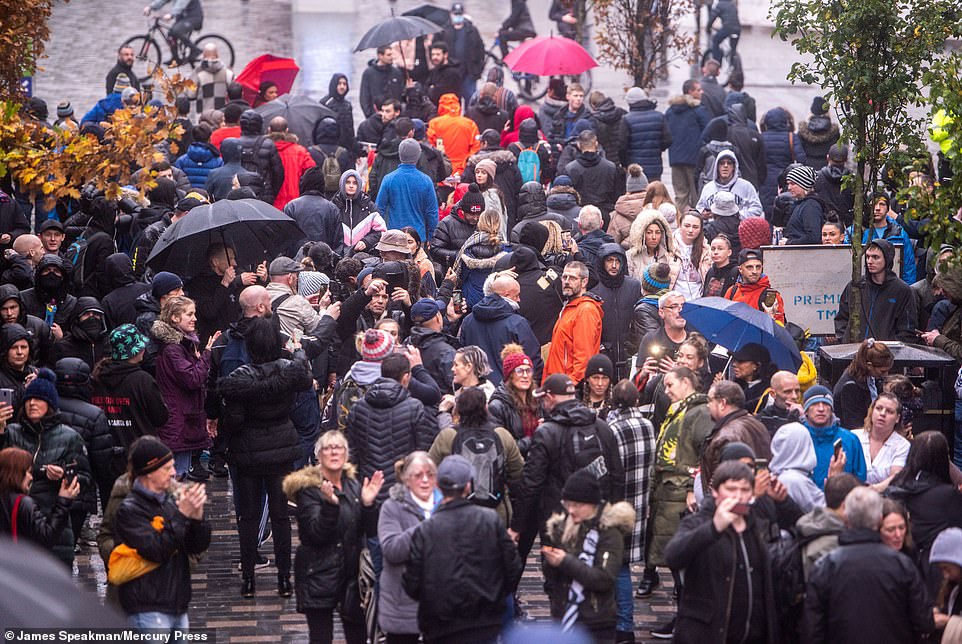 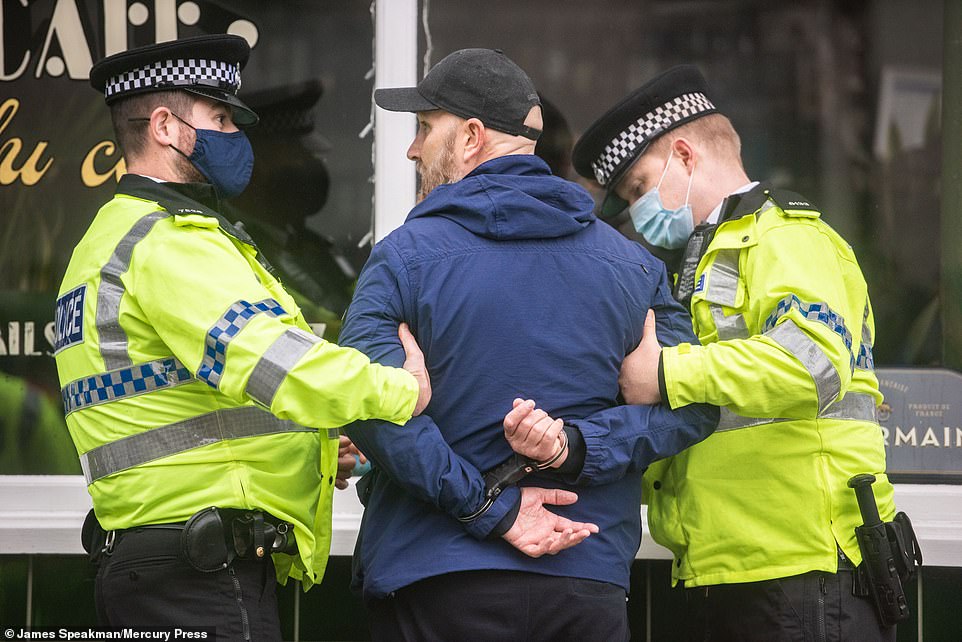 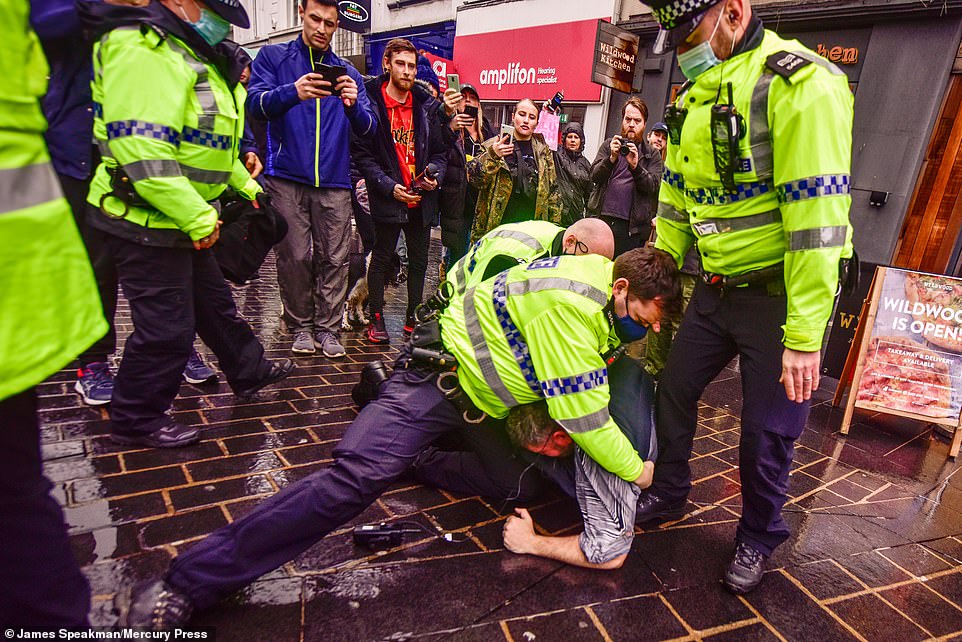 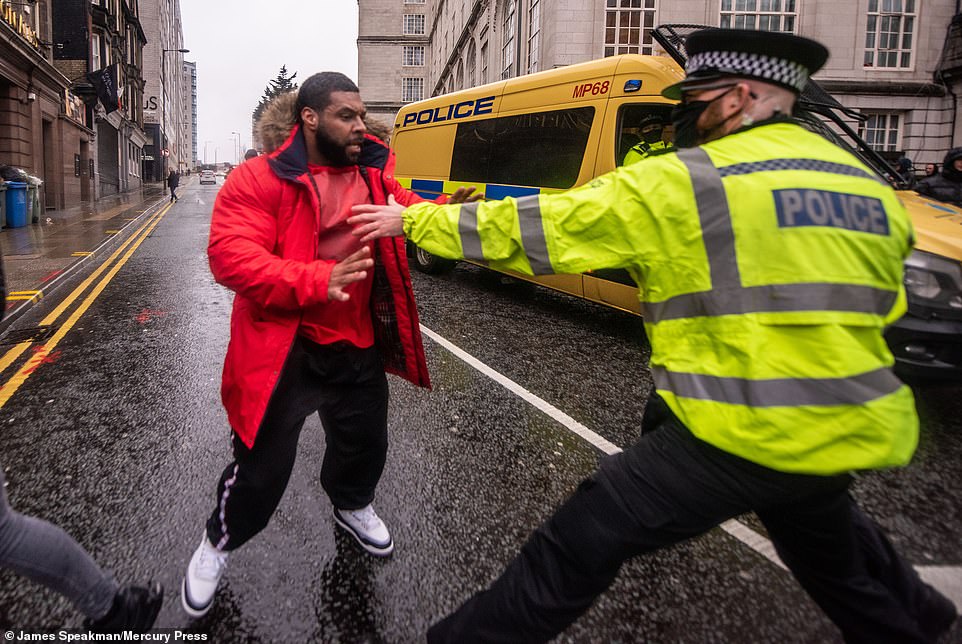 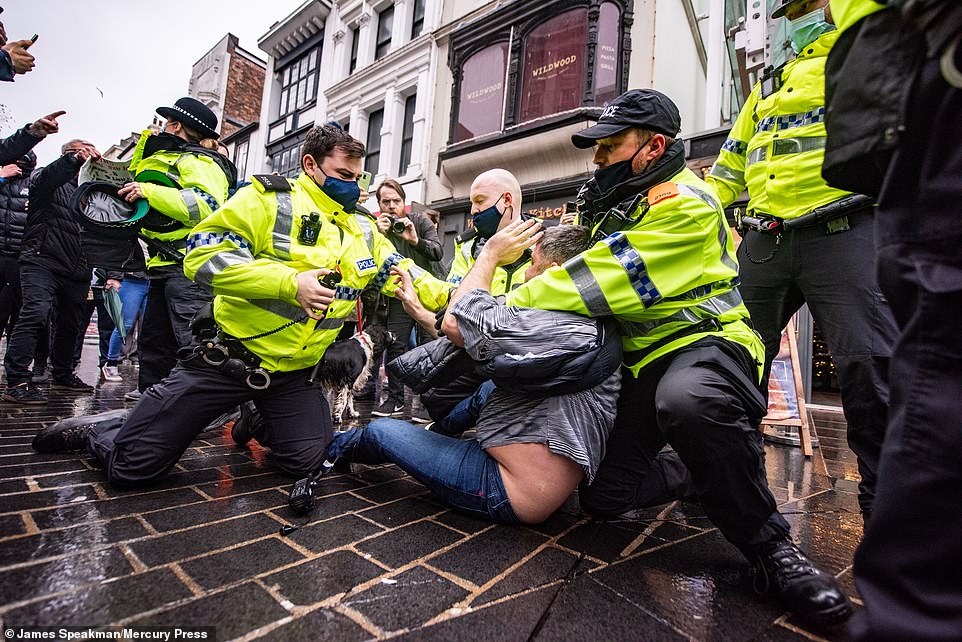 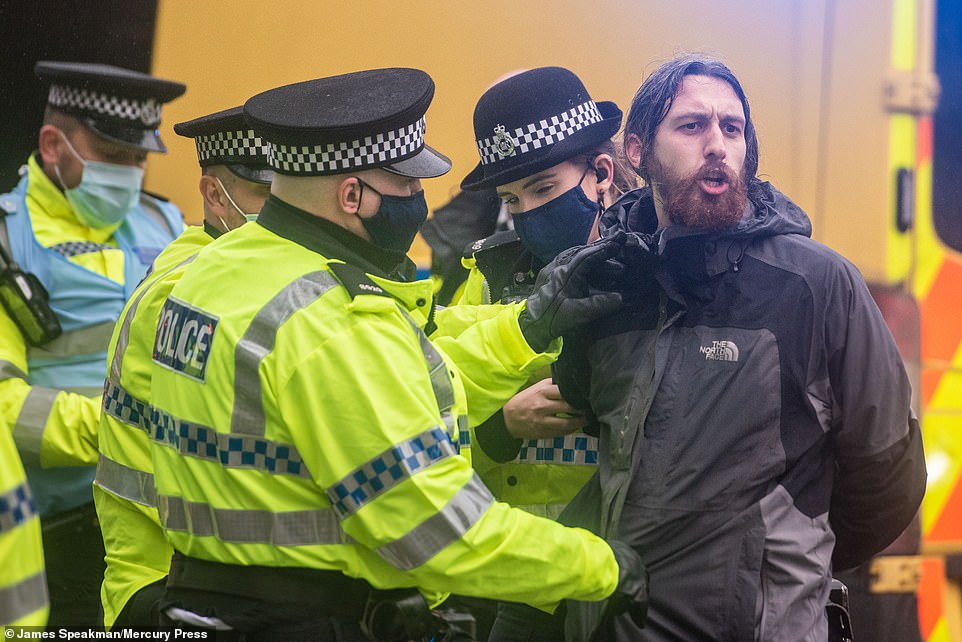 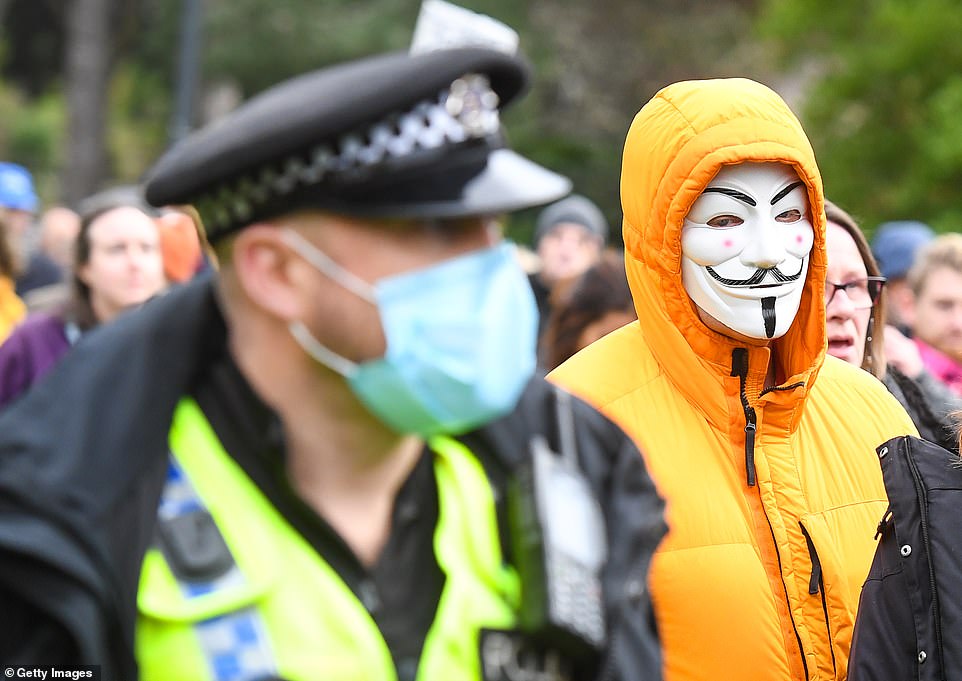 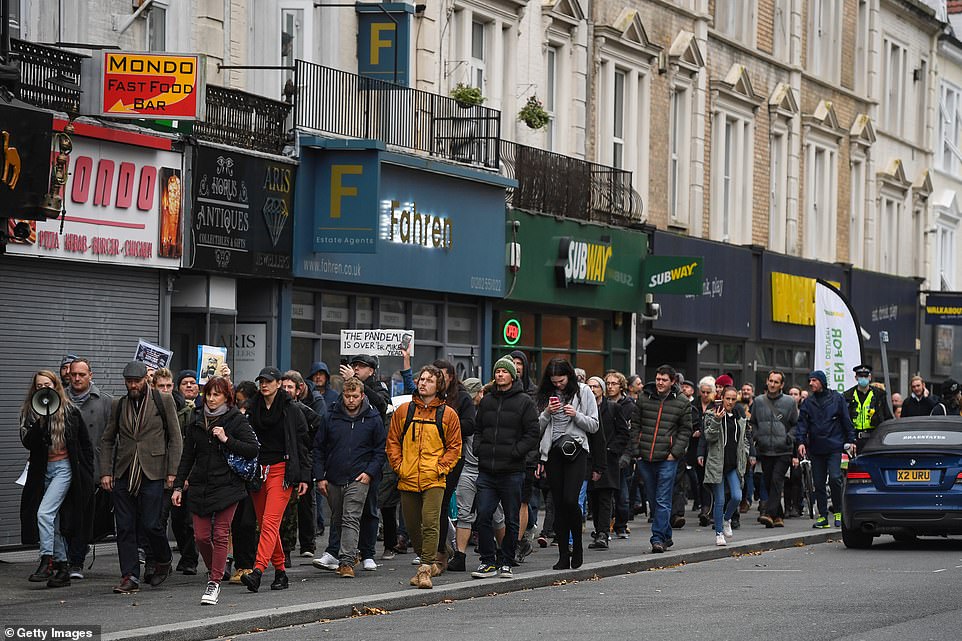 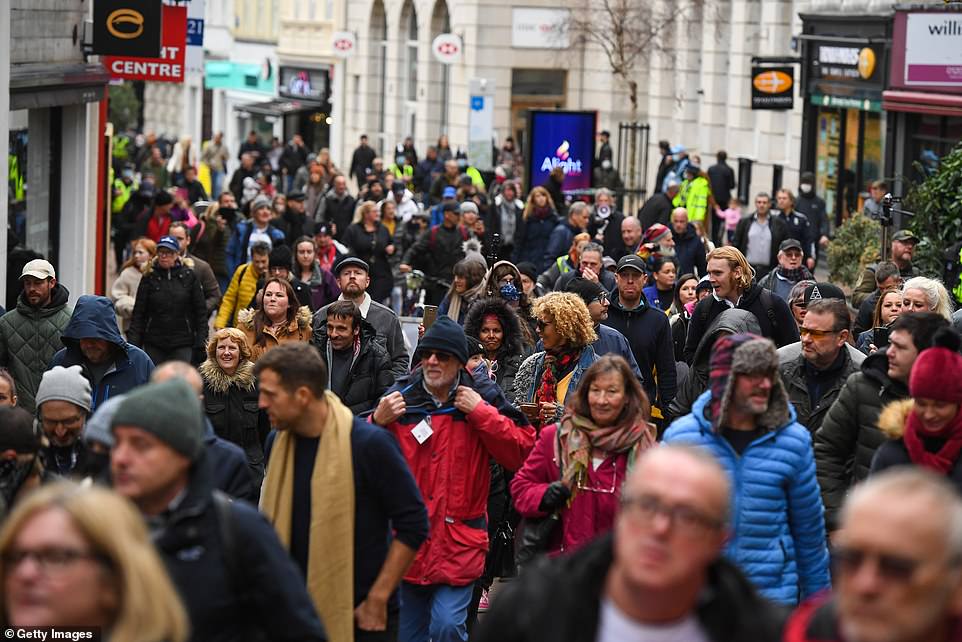 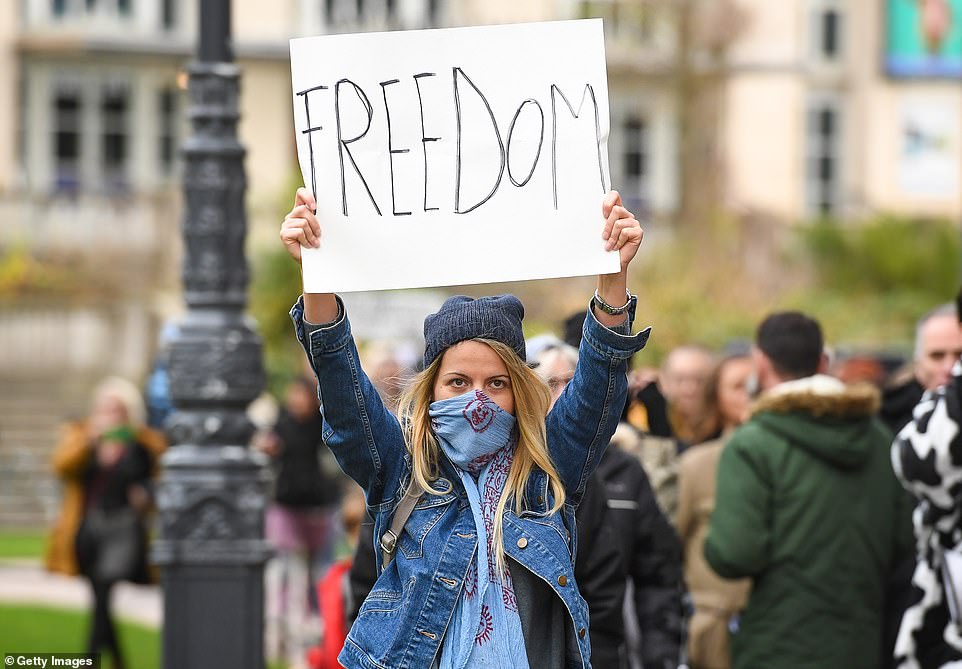 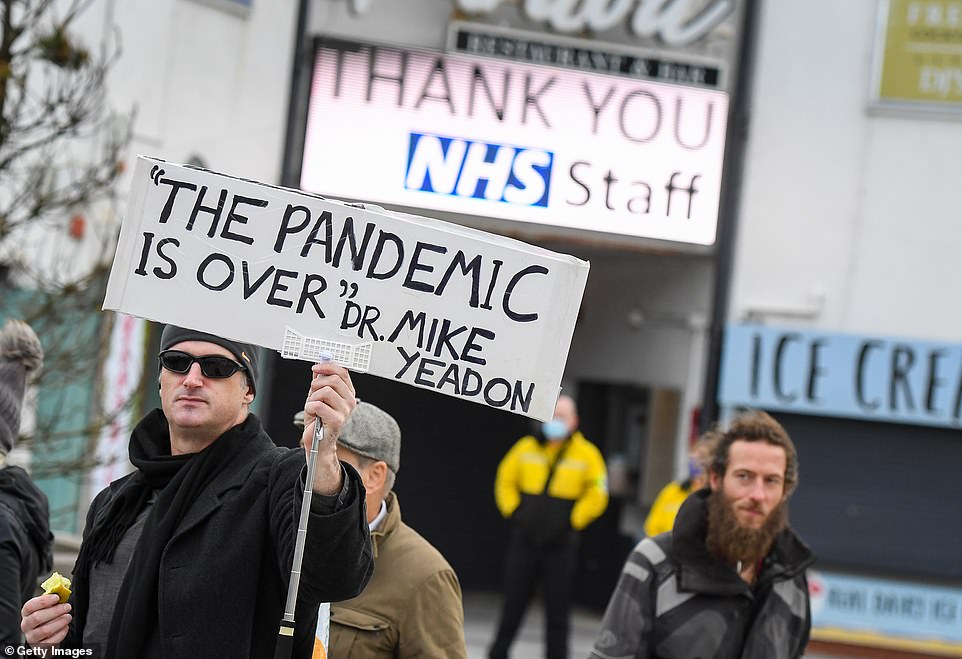 In England 316 people who tested positive for coronavirus died, while in Scotland there were 37 and in Wales the death toll rose by 28. In Northern Ireland a further ten deaths were recorded.

Meanwhile, it has been suggested quarantine times for contacts of Covid-19 cases could be halved to just a week or eliminated entirely under a pilot testing trial.

Rapid tests which can give results in just 15 minutes will be handed to emergency workers in Liverpool next week, to ensure that if one tests positive the rest of their team will not have to self-isolate.

In today’s figures, patients who died of coronavirus in England were aged between 28 and 102. All except five, aged between 64 and 96, had known underlying health conditions and the deaths occured between June 3 and November 20.

Twenty-two other deaths were reported with no positive Covid-19 test result. It means the total number of confirmed deaths reported in hospitals to 38,112, according to NHS England.

The total number of deaths was the highest Saturday increase since May 2 when 469 deaths were reported.

It comes as rapid tests will be given to contacts of people infected with the virus who have been stuck at home for more than seven days, with those who get a negative result released from quarantine.

If the mass testing pilot proves successful, it could be rolled out across the whole of the UK. But this isn’t expected to get the green light until next year at the earliest.