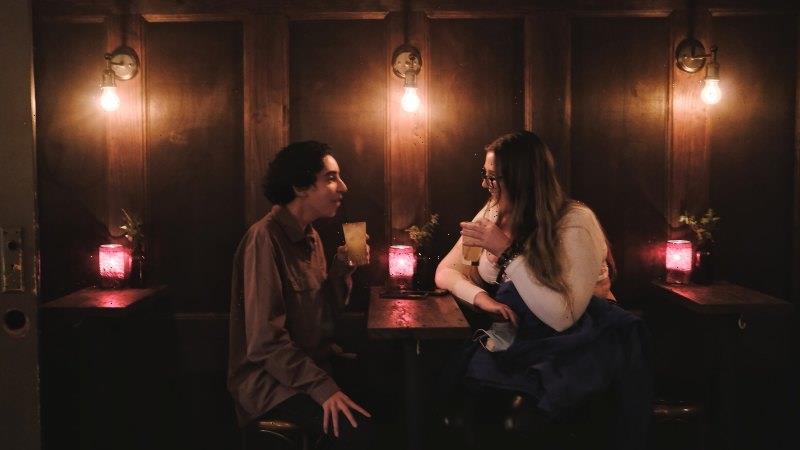 The day in review

Thanks for reading the blog today. That's it for another week. Here are some of today's headlines:

Have a good weekend.

Bali’s Australian tourist blockade could be lifted this weekend

Australians could be cleared to begin travelling to Bali again as soon as this weekend as Indonesian authorities discuss approvals for what was once the island’s biggest international tourist market.

It comes as Thailand confirmed it would exempt fully vaccinated Australian tourists from November 1 from quarantine, alongside citizens of several other nations now welcome for holidays. 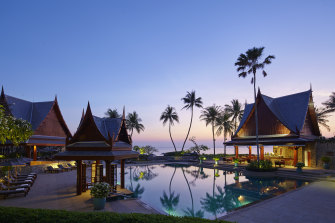 Bali holidays will be a possibility from November 1, as long as visitors spend the first five days in resort quarantine.

There has been confusion about Australia not being among the first 19 countries Indonesia has approved for the resumption of international travel to its top holiday destination.

China, India, Japan, New Zealand and a range of European and Persian Gulf states are among the countries in the initial Bali intake.

But the tourism mecca is still waiting for foreigners to turn up more than a week after the official reopening because of a lack of flights.

According to the entry rules set by Indonesia, foreigners heading to the island can only arrive there on direct flights from approved countries.

They must be fully vaccinated and serve five days in hotel resort quarantine when they get to Bali, which has fully vaccinated more than 80 per cent of its population, according to the Indonesian health ministry.

Search efforts around the remote campsite where four-year-old Cleo Smith disappeared from on Western Australia’s rugged Coral Coast are being wound back today.

Police will instead focus on the criminal probe — Taskforce RODIA, which involves 100 officers — into the suspected abduction of the Carnarvon girl, with no sign of Cleo or her sleeping bag, as they offer a $1 million reward for information that could find her. 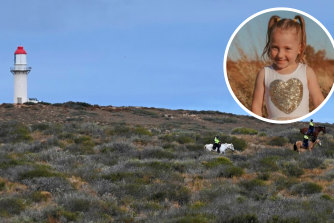 Mounted police scour the hills behind the Blowholes campsite, where Cleo Smith went missing from, on Thursday while soldiers fly a drone from near a lighthouse.Credit:Peter de Kruijff

Former WA police commissioner Karl O’Callaghan said the most likely scenario if Cleo was taken was she had been moved away from the campsite by persons unknown.

But given it was seven days since she was last seen, Cleo could now be far away.

“What [police] clearly decided is she’s not in the vicinity of the campsite. The initial response is she may have wandered out of the tent. She may have fallen into a hole. They’ve now decided she’s not there, so they are broadening their search out,” Mr O’Callaghan said.

Podcast: Former Wallaby’s humanity in the face of horror

Here's something a bit different from today's Please Explain podcast.

Toutai Kefu has been described as the last genuine number eight to wear the Wallabies jersey and until two months ago he had nowhere near the profile of many of his more famous former teammates.

But Kefu’s quiet life was brutally interrupted recently when, in the pre-dawn hours of August 16, four teenagers broke into the family home and subjected him, his wife Rachel and their two eldest children to a terrifying home invasion. 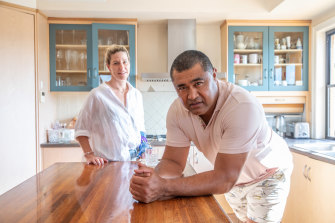 Toutai Kefu and wife Rachel in their Brisbane home.Credit:Paul Harris

Despite the traumatic event, Kefu has chosen forgiveness over hating the four teens alleged to have attacked him.

"Those kids … They’ve been brought up differently … I feel sorry for them," he said. "They’re not going to have the same life my kids are going to have. We should pray for them."

You can read this remarkable feature story here, and listen below as Toutai Kefu tells Georgina Robinson about how his family is piecing its life back together.

As Melburnians embrace so-called "freedom day", private hospital operators are frustrated that they are still not allowed to welcome back patients waiting for elective surgery. 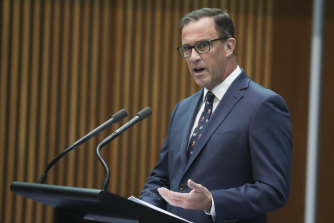 “I haven’t heard any rational argument as to why these facilities shouldn’t be able to operate,” Mr Roff said.

"It doesn't make sense that people in Melbourne can go to the pub or a restaurant, but they're not allowed to go and get their cataracts or hernia removed."

Mr Roff said day hospital members of the association were operating at between 5 per cent and 20 per cent of their normal capacity, under the Victorian ban on non-urgent procedures.

NSW is due to restart elective surgery at 75 per cent of usual capacity on Monday.

Qantas has confirmed it will resume international flights out of Melbourne early next month as Victoria joins NSW in lifting all quarantine restrictions for vaccinated Australians.

The airline will shortly put tickets on sale for twice-weekly flights to London from Melbourne, with one stop in Darwin, starting November 6.

Qantas will then restart flights between Melbourne and Singapore from November 22, the group confirmed to this masthead.

Foreign airlines like Singapore Airlines, Emirates and Etihad that have continued to fly into Australia through the pandemic with tight passenger caps will be opening up for more bookings into Melbourne, with the lifting of quarantine restrictions.

Qantas is resuming flights out of Sydney to London and Los Angeles from November 1, and said earlier on Friday that it would bring forward the restart of services to Singapore, Bangkok and Johannesburg.

Tasmania to open borders on December 15

Tasmania will open its borders to the rest of Australia on December 15, the state's Premier Peter Gutwein has announced.

Mr Gutwein said by the time borders open he is confident Tasmania will have reached a 90 per cent double-dose COVID-19 vaccination rate for people aged over 16. 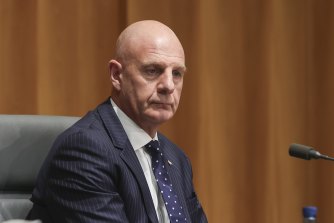 "Anyone will be able to enter Tasmania from anywhere within Australia, subject to being fully vaccinated, that's if they're 12 years and over, and having a negative test result within 72 hours of travelling," he said.

He also outlined a curious exception to this rule for Tasmanians leaving the state for less than a week. If a Tasmanian travels to NSW or Victoria for a weekend, they do not need to get a test to return home.

Mr Gutwein said once the state reaches 80 per cent mark in early November "we'll implement a risk-based home quarantine for most returning Tasmanians".

He also said the state would mandate vaccination for disability sector workers.

And with immediate effect, the requirement to wear masks – a hangover restriction from the spontaneous lockdown last week – has now been removed.

Brisbane Airport has been damaged after a tornado formed east of the CBD on Friday morning.

The Bureau of Meteorology said a tornado formed near the Port of Brisbane just after 10am during a supercell thunderstorm near Brisbane Airport. 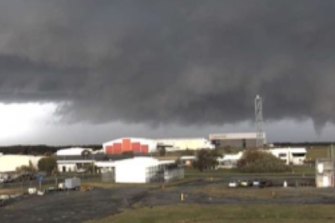 A suspected tornado at Brisbane Airport on Friday.Credit:Twitter/Bureau of Meteorology

The airport recorded 101 millimetres of rain in one hour.

It's been a wild week of weather for Queensland after Mackay in the state's north was hit by the largest-ever hailstones in recorded Australian history.

A Brisbane Airport spokeswoman said teams were assessing what damage had taken place across the precinct.

Victoria’s Premier says he hopes to have “as few rules as possible” by Christmas, as the state works to get booster shots available to vulnerable populations later this year.

“I hope to be as close to normal as we can possibly get,” Daniel Andrews said. “But there are going to be some things we still have to do, like booster shots, for instance. 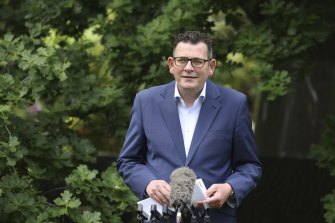 Mr Andrews on the first day after lockdown.Credit:Paul Jeffers

“What we know is that whilst these vaccines are incredibly effective, if you wait too long to get your third shot then their efficacy and their benefit wanes.

He said he wants the MCG as full as can be for the Boxing Day Test match against England.

“I want the place to be as full as possible, and I can't guarantee that outcome, but that's the outcome I am working towards," he told reporters.

Further on the sports front, Mr Andrews hosed down reports that NSW is trying to poach the F1 Grand Prix from Melbourne.

He said the contract for the major sporting event – which is binding until 2025 – ensured the Australian GP would remain in Victoria for the time being.

“​​We're very confident that this is the place for Formula 1,” he said.

Victorian Premier Daniel Andrews said he expects the state will reach 80 per cent full vaccination by next weekend, at which point additional restrictions will be eased.

"[We] will deliver faithfully, each and every item that's contained within Victoria's road map to deliver the national plan," he said. 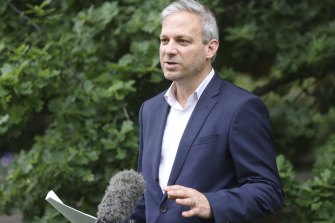 Mr Andrews also confirmed reports that hotel quarantine will be scrapped from November 1 for overseas travellers arriving with full vaccination or a medical exemption. There will be a cap of 250 people a week for hotel quarantine where people have not been fully vaccinated or have been vaccinated with an unrecognised vaccine.

“This is a freedom of movement we've not been able to enjoy for a long time, and that's all because Victorians got vaccinated in record time and in record numbers,” he said.

Something that’s been a source of discussion this morning has been the new-look Victorian daily COVID tweet from the Department of Health. The new format highlights vaccination numbers and relegates case numbers to fine print.

“I think it's appropriate that we focus on the levels of vaccination we're getting to,” he said.

“High vaccination coverage is literally representative of the protections of everyone across the state and of health system, and it's the target we really need to focus on.”