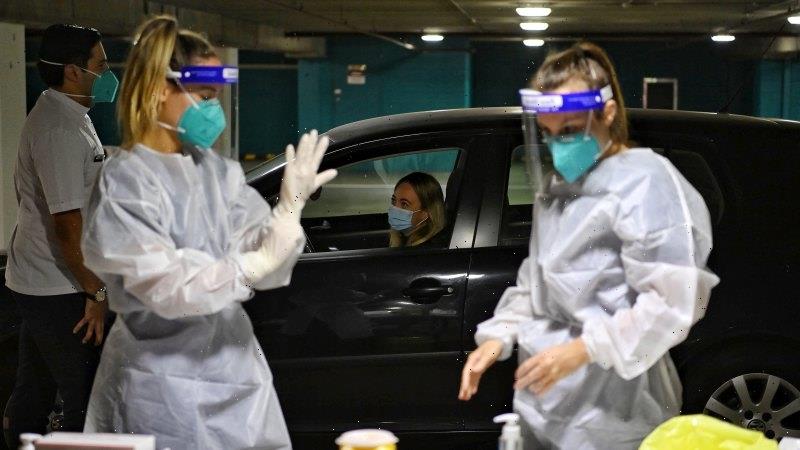 With case numbers in Victoria continuing to rise, this is what the state’s COVID-19 infection curve looks like:

How Victoria’s outbreak is tracking

Victoria’s COVID-19 case numbers continue to follow – perhaps slightly exceed – the Burnet Institute’s projections for reopening, with the growing effect of vaccination counteracted so far by increases in movement among the population.

However, data suggests Victoria is unlikely to have as many hospitalisations and deaths as there were in NSW because the state is further advanced in its vaccine rollout than NSW was when it had similar case numbers.

Modelling commissioned by the Victorian government and released alongside the state’s road map to reopening forecast new cases would reach about 2000 a day on October 10 before plateauing, then jumping again when lockdown lifted at the end of October.

The end point of the Burnet Institute’s projections are troubling: peak hospital demand of 3150 patients, peak ICU demand of 706, and a better than one-in-two chance of overwhelming the healthcare system.

Although it is early, Victoria is so far tracking on that path – or indeed slightly above the predicted daily case numbers.

The state conducted 73,443 tests and administered 41,177 vaccines in the latest reporting period.

The NRL Integrity Unit will talk to Penrith co-captain Nathan Cleary after three men from Sydney’s west were allegedly pictured on social media partying in Queensland after the team’s grand final victory.

Queensland Police allege the men crossed the border on the Pacific Highway with “incorrect border passes” on Saturday. 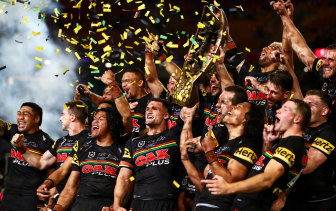 The Penrith Panthers celebrating after their NRL grand final win.Credit:Getty

The Integrity Unit is investigating the link between the club and the men, aged 23, 24 and 25, who allegedly drove from Sydney to attend the football match at Suncorp Stadium in Brisbane last Sunday night, October 3.

An NRL spokesperson confirmed the unit would speak to Cleary about the matter. It is not suggested he knew about the men’s alleged border breach.

The trio were picked up by Queensland Police at a hotel on the Gold Coast on Friday, issued with a $4135 fine for breaching Queensland health rules and sent back to NSW.

They came to the attention of authorities when a senior NSW police officer saw a photo of the men partying on the Gold Coast, allegedly in breach of the public health order closing Queensland to NSW residents.

Two childcare centres in Melbourne’s outer suburbs have been identified as exposure sites, forcing children and staff into two weeks of isolation, with a regional cinema screening also identified as a site of potential COVID-19 exposure.

Pakenham’s Cardinia Lakes Early Learning Centre, in Melbourne’s south-eastern suburbs, is listed as a tier-1 exposure site between 6.10am and 4.30pm each day on September 27 to September 29.

Child’s Play Early Learning Centre in Tarneit, around 25 kilometres west of Melbourne’s CBD, was labelled a tier-1 exposure after a positive case visited between 7am and 6.30pm on September 30, and again at the same time on October 4 and 5.

Plan to bring thousands of nurses and doctors into ‘Fortress Australia’

Australia will allow 2000 overseas nurses and doctors to enter the country for work under a plan being finalised by the Commonwealth and states to ease a healthcare staffing crisis.

With Melbourne and Sydney’s hospital beds jammed with COVID-19 patients and the health systems of other states also under strain, the reinforcements will be flown in over the next six months and predominantly dispatched to outer suburban and regional hospitals and GP clinics.

Health Minister Greg Hunt said doctors and nurses who had already applied to come to Australia would be able to sidestep travel restrictions to secure flights and take up critical jobs in our pandemic response.

“This will be a one-off boost to provide additional support,” Mr Hunt told The Age and The Sydney Morning Herald. “The Commonwealth is committed to it and the states are working constructively with us on it.”

The airlift is likely to be made up largely of migrants from Britain, Ireland and other countries where nursing and medical qualifications are recognised by regulators as being equivalent to those in Australia. This means they can start working shifts as soon as they arrive.

As NSW closes in on its 80 per cent COVID-19 vaccination target, some Sydney postcodes are trailing the rest of the state, with less than half their residents double-jabbed.

Across the city, data reveals stark disparities between neighbourhoods, with Chippendale and Silverwater at less than 40 per cent fully vaccinated, compared with northern suburbs of Lindfield and Newport with more than 80 per cent.

NSW tipped over its 70 per cent double-dose target on Wednesday afternoon, triggering multiple freedoms including the reopening of bars, retail and gyms to the fully vaccinated from Monday. More restrictions will be relaxed at 80 per cent, which the state is due to hit on October 25.

But a handful of inner Sydney postcodes, including Ultimo, Kingsford and Chippendale, are at less than 50 per cent double-dose, and dozens more, such as Potts Point, Lakemba, Eastlakes, Ashfield, Darlinghurst and Waterloo, are sitting between 50 and 59 per cent.

Hello and thanks for joining us this morning. In case you missed it, here are the big headlines from yesterday: