A Perth man set to receive $24,000 in public donations following claims he was mugged in Bali has admitted in a police video he actually acquired his injuries after falling off a scooter.

A GoFundMe page was launched by a friend of Lachie Hunt, 22, two weeks ago showing a photograph of the young traveller laying in a hospital bed in a neck brace and covered in bandages.

“Our little mate Lachie Hunt has had a bit of an accident sounds like he was mugged and bashed pretty good, he can’t remember much, I’m in contact with his mum,” the friend wrote.

“[He is] getting the best care but the best care is bloody expensive, so asking if you are able to help out in any way to dig deep, it would go along way and mean a lot to the family.”

The friend listed Hunt’s injuries as a potential fractured back, bleeding on the brain, and as being “banged up all round”.

The page gained national media interest, with several outlets publishing stories about Hunt’s fundraising plight as his mother flew to Bali to be by his side. 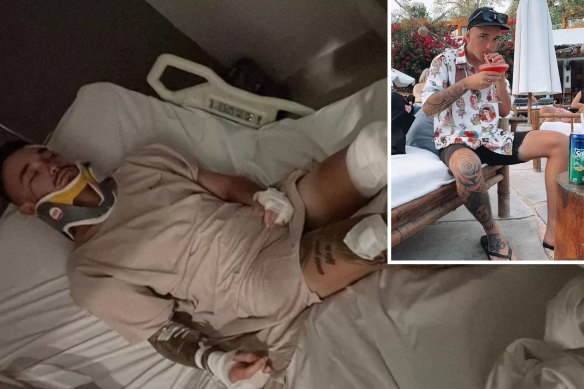 Lachie Hunt in a Bali hospital after being injured in a scooter accident was a regular visitor to the holiday island (inset).Credit:GoFundMe

After attracting donations from hundreds of well-wishers, Bali police released a video of Hunt, seated next to his mother Melissa, reading a prepared statement explaining how he was injured.

“I had an incident in Bali due to falling from a motorcycle,” he said.

“I had lost my memory for two days due to concussion. I was in hospital for six days due to the injuries that I suffered from.

“The reason the GoFundMe was made was for friends and family to help pay the hospital bill. In no way did I have any intention for this to go viral and be taken over by the Australian media.”

Hunt said he refused to talk to media outlets who contacted him about the GoFundMe page as he did not want to shed a negative light on Bali, which he considered his second home.

He said a witness told police that Hunt was allegedly speeding on a scooter around 4am on January 12 when he hit a speed bump and crashed, losing consciousness.

“Around 4.30am the foreigner woke up with his face full of blood and he immediately left,” Satake said.

Satake said Hunt initially told police he injured himself while drunk after dropping his phone and being pushed over by a stranger as he bent over to collect it.

Based on a preliminary police investigation, Satake said Hunt “experienced a single traffic accident because he was driving under drunk condition and no elements of robbery and torture were found”.

“We hope all people in Bali and tourists [choose] to wisely use social media and don’t easily trust hoax information that could provide negative impact on Bali,” he said.

A GoFundMe spokeswoman said the website’s trust and safety team was liaising with both the campaign organiser and the beneficiary, Melissa Hunt, in relation to the status of the fundraiser.

Summer sale! Subscribe to WAtoday for $1 a week for the first six months, for uninterrupted access to news, culture and sport from our Perth team, plus sister publications The Age and the Sydney Morning Herald, and exclusive emails from our newsroom. Change or cancel any time. Hurry! Sale ends February 12.