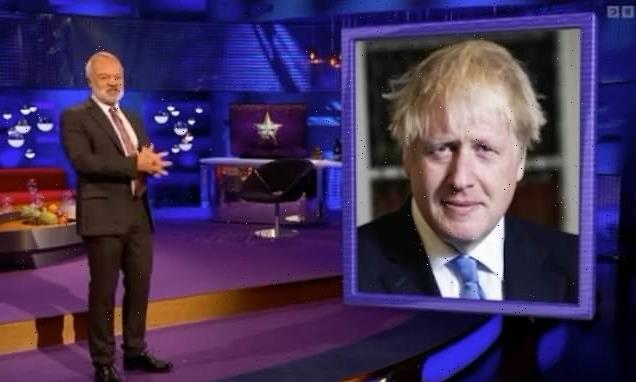 BBC star Graham Norton has waded into the debate over who should become the next Prime Minister with a cheeky swipe at Boris Johnson.

As the race to succeed Liz Truss heats up between Mr Johnson, Rishi Sunak and Penny Mordaunt, the comedian used the opening monologue of last night’s Graham Norton Show to poke fun at the situation.

‘Sources say it could be Penny Mordaunt for the party’s sake, it could be Rishi Sunak for the country’s sake, or even Boris Johnson… for f**k’s sake.’

The swipe at Mr Johnson attracted laughter from the crowd – who like the rest of Britain are awaiting a decision from the Tories after Ms Truss’s humiliating resignation 44 days into the job. 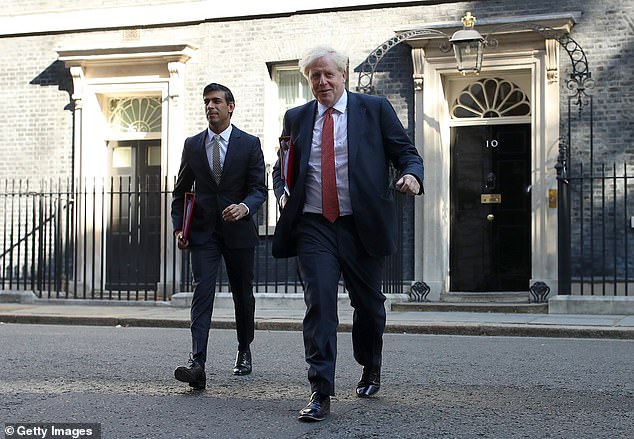 The latest polling suggests Mr Sunak is the most likely future leader with backing from 85 MPs, including former chancellor Sajid Javid, who said it was ‘abundantly clear’ he had the ‘values our party needs’ to ‘move on from the mistakes of the past’.

Commons Leader Penny Mordaunt is the only candidate who has officially declared she is running, but former chancellor Mr Sunak is expected to launch a challenge.

But Mr Johnson is due to arrive back in the UK today following a holiday in the Caribbean, and former minister Sir James Duddridge revealed he had told him he was ‘up for it [a return to No10]’.

Sir James said: ‘I’ve been in contact with the boss via WhatsApp. He’s going to fly back. He said, ”I’m flying back, Dudders, we are going to do this. I’m up for it”.’

Mr Johnson will argue he is ‘the only person that’s got a mandate’ from the 2019 general election and that he can ‘bring the party together’, Sir James said.

Allies of Mr Johnson suggested he would be willing to meet Mr Sunak as soon as this afternoon if the former chancellor agrees. The two men have not spoken since Mr Sunak quit the Cabinet in July, triggering Mr Johnson’s exit a few days later. The ‘backstabber’ narrative dogged Mr Sunak throughout the summer leadership campaign and is seen as one of the main reasons Tory members rejected him in favour of Miss Truss. 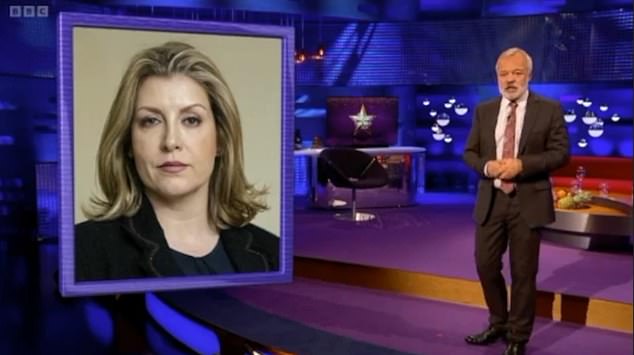 When Norton proposed a question about the Tory leadership, he said Ms Mordaunt could be voted in ‘for the party’s sake’ 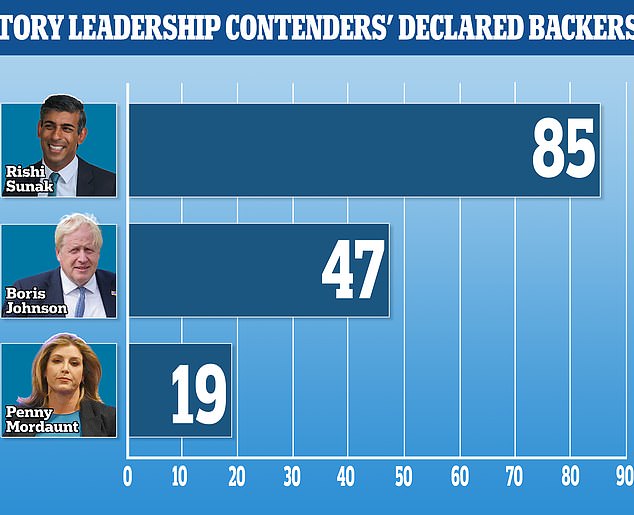 The most recent poll revealing the number of declared backers for the Tory leadership contest shows Rishi Sunak in the lead with 85, followed by Mr Johnson and Penny Mourdant 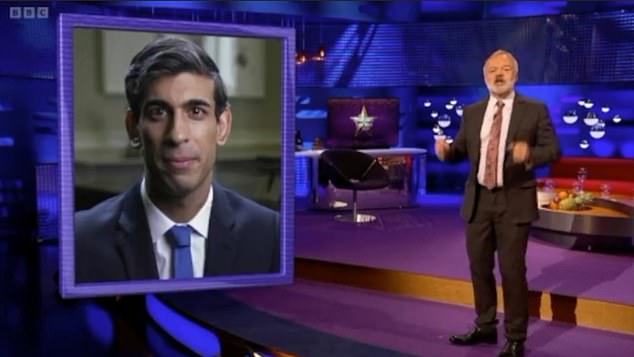 When he questioned Mr Sunak’s leadership chops, Norton said he could be chosen for the sake of the nation 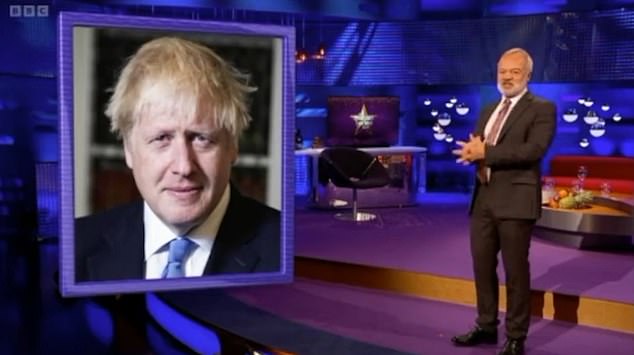 With Mr Johnson, Norton’s tone changed. Dripping with sarcasm, he said: ‘Or even Boris Johnson… for f**k’s sake’

MPs on both sides of the Tory divide fear that neither man will be able to heal the deep divisions without the support of the other. Peterborough MP Paul Bristow said it was time to ‘put the band back together’.

He told the BBC: ‘Boris Johnson has a mandate from the members of the party and from the electorate. I’m sure my colleagues will reflect on that when they vote, and we can avoid a general election, we can go out and put this band back together, we can have political heavyweights around that Cabinet table and we can go on and win the next general election. I’m convinced of that.’

Mr Johnson’s potential reappointment would not be welcomed by all Tories. Former leader Lord William Hague warned a resurrection would lead to a ‘death spiral’ for the party.

‘I think it’d be a very, very bad idea to bring Boris Johnson back,’ he told Times Radio.

‘Him returning is the solution? That would be going round in circles and that could become a death spiral of the Conservative Party.

‘And I think it’s possibly the worst idea I’ve heard of in the 46 years I’ve been a member of the Conservative Party.’ 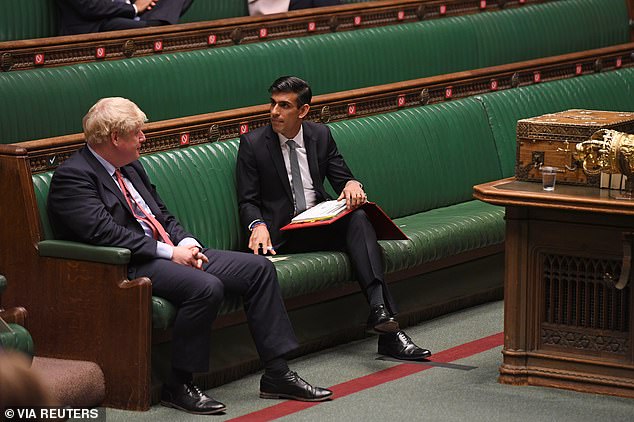 One senior Tory source, said regarding the reunion of Johnson and Sunak: ‘It is something that has got to be tried. The party as it stands is fractured – it is incumbent on the two greatest talents in the party to see if it can be healed’

Former minister Johnny Mercer said he could not put himself or his constituents through another Johnson administration after the ‘terrible’ lows of the last time, as he officially backed Mr Sunak.

‘I love Boris to bits and he’s got amazing qualities for this country, but it is now time for serious, competent, straightforward and values-based governance.’

A return for Mr Johnson would be beset with challenges, not least the inquiry into whether he lied to the Commons over the partygate scandal, for which he was fined by police.

If found guilty by the Commons Privileges Committee, he could face recall proceedings that would leave him battling for his seat in the Commons if he receives a suspension of 10 days or more.

His popularity with the public has crashed, even if he still rides high with the Tory membership. Some MPs have even suggested they could resign the party whip if he wins.