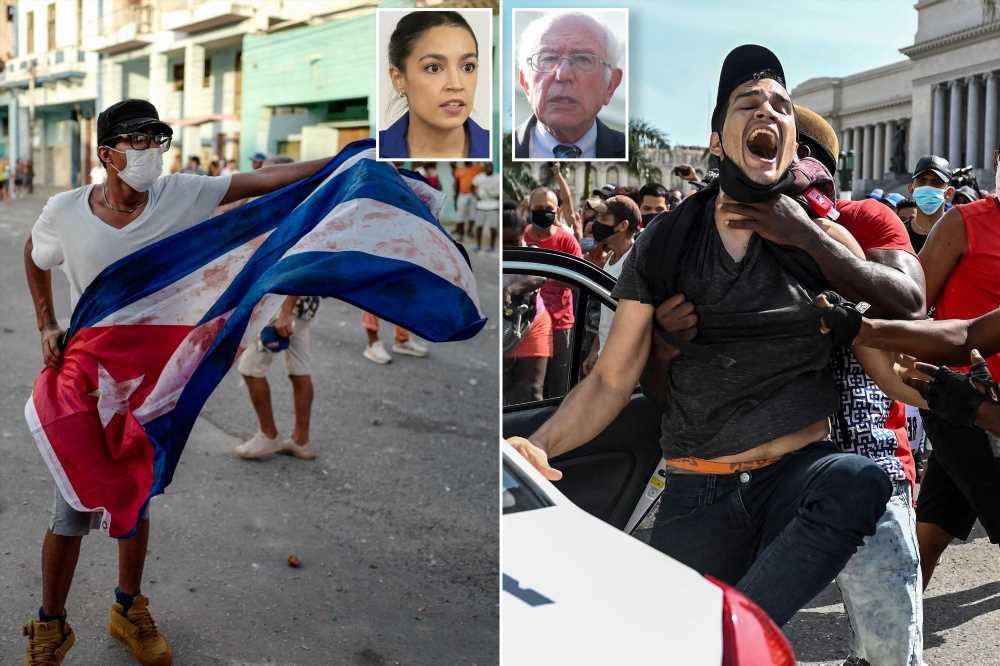 Biden voices US support for people in Cuba, Haiti

Usually-outspoken socialist Rep. Alexandria Ocasio-Cortez remained silent as of early Tuesday about violent protests erupting in Cuba, while Sen. Bernie Sanders finally spoke out — to blame US sanctions rather than decades of Communist dictatorship.

“All people have the right to protest and to live in a democratic society,” Sanders tweeted just before midnight Monday, of the protests that started Sunday demanding “freedom” and the removal of President Miguel Díaz-Canel.

“I call on the Cuban government to respect opposition rights and refrain from violence,” the democratic socialist implored of the leader who had called for “revolutionaries” to take to the streets and fight for communism.

“It’s also long past time to end the unilateral U.S. embargo on Cuba, which has only hurt, not helped, the Cuban people,” Sanders wrote.

His message received backlash from many who suggested he was missing the clear message being sent by protesters demanding freedom from the nation’s rulers — with viral images also showing some carrying American flags as a symbol of the democracy they sought.

“You want to help? Repost the unedited streams coming from the Cuban youth on the island. They are calling for Liberty and an end to Communism,” Miami-based musician Eloy Escagedo replied to Sanders.

“As a Cuban, I can tell you the US Embargo have to stay in place until the Castro/DiazCanel dictatorship is out of Cuba,” someone named May also tweeted him.

“The Cuban people need support to remove the government!!!!!”

Others noted just how long it had taken the democratic socialist to speak up.

“He needed 72 hours to wrap his head around it,” economist and conservative blogger Max Murray quipped.

New York Rep. Ocasio-Cortez was active on Twitter until late Monday — ripping white supremacy, without any mention of Cuba. Other outspoken “Squad” members like Ilhan Omar and Rashida Tlaib also appear to have ignored the protests.

Fox Business host Stuart Varney had insisted in his show that the “silence from America’s left” was because the protests were highlighting ” the failure of socialism.”

“The far-left want to make America more like Cuba. But a lot of Cubans apparently want to be more like Americans,” Varney said.