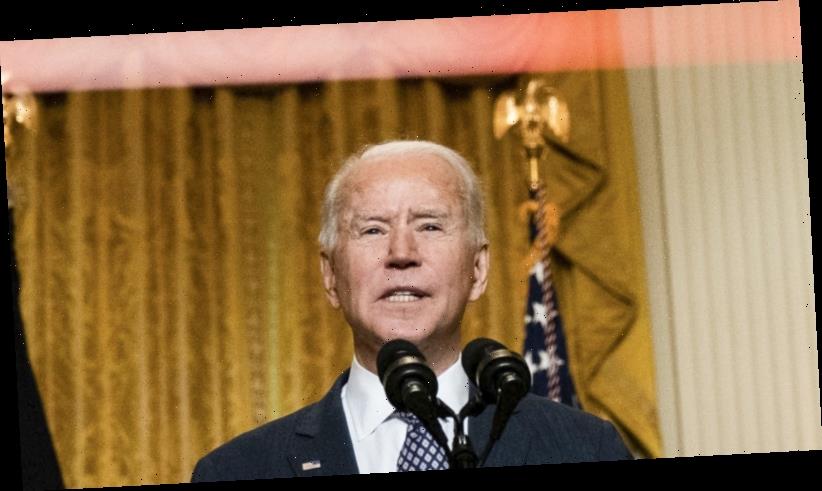 London: Joe Biden has called on Europe to prepare for “long-term competition” with China, warning that the world is at an “inflection point” but expressed confidence that democracy would prevail.

Addressing the virtual Munich Security Conference in his first international foreign policy speech, the US President said Western nations needed to prove to their voters the benefits of democracy. 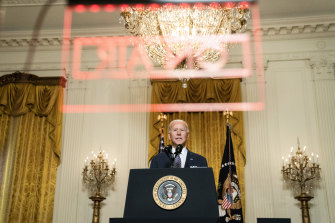 US President Joe Biden speaks while addressing the virtual Munich Security Conference in the East Room of the White House in Washington.Credit:Anna Moneymaker/The New York Times/Bloomberg

“How the United States, Europe and Asia work together to secure the peace and defend our shared values and advance our prosperity across the Pacific will be among the most consequential efforts we undertake,” he said.

“Competition with China is going to be stiff, that’s what I expect and that’s what I welcome … we can own the race for the future.”

Biden said that would require being clear-eyed about pushing back against the Chinese government’s “economic abuses and coercion” and those that “monopolise and normalise repression”.

“Everyone must play by the same rules,” he said, adding that Chinese companies should be held to the same anti-corruption and monopolistic mechanisms that govern Western companies.

Biden warned that Russian President Vladimir Putin was trying to break up the Transatlantic alliance because it was easier for him to bully and pick off divided countries as opposed to building a united and strong alliance. “Democratic progress is under assault,” Biden warned.

“We are in the midst of a fundamental debate about the future and direction of our world. We’re at an inflection point.

“Democracy will and must prevail. We must demonstrate that democracy can still deliver for people in this changed world.”

Biden said the West’s “galvanising mission” was to prove that democracy was not a “relic of history” but “the single best way to revitalise our future”. 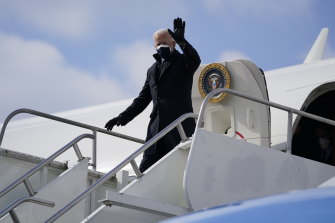 “Democracy doesn’t happen by accident. We have to defend it. Fight for it. Strengthen it. Renew it,” he said.

Speaking ahead of German Chancellor Angela Merkel and French President Emmanuel Macron, Biden told European leaders that although the Transatlantic alliance had been “strained and tested” over the past four years “America is back”.

“The United States is determined to re-engage with Europe, to consult with you, to earn back our position of trusted leadership,” he said.

Biden did not name his predecessor, but strongly repudiated Donald Trump’s hostility towards NATO and the European Union, saying the relationship was based on shared values and was not “transactional”.

Merkel told the same conference that the US and Europe needed a “joint agenda” on how to deal with China.

She described China as a competitor but also vital to settling global problems like climate change.

“In recent years China has gained more power on the international stage and we … need to react to that,” Merkel said.

But Merkel, who has come under criticism for adopting a soft stance on China, said that “our interests would not always converge”.

Macron, citing a former Australian prime minister, called for the “defence of sovereignty” including space, which he said were potential conflict zones.

The leaders met earlier for a virtual meeting of the G7, hosted by British Prime Minister Boris Johnson.

The leaders issued a statement pledging to “consult with each other on collective approaches to address non-market oriented policies and practices,” in a clear reference to China.

Johnson has invited the leaders of Australia, South Korea and Japan to attend the G7 in Cornwall in June. He told the Munich conference this was an example of “reaching beyond established alliances,” and building “a coalition for openness and innovation”.

He praised Biden’s speech saying: “America is unreservedly back as the leader of the free world and that is a fantastic thing.”

“The gloom has been overdone. And we’re turning a corner and the countries we call the West are drawing together and combining their formidable strength and expertise once again.”

UN Secretary-General Antonio Gutterres told the conference that multilateralism was making a comeback, particularly amongst the public.

“He made it very clear that we’re at an inflection point and that history will judge us, but that’s not what Europeans want to hear,” Fallon said. “Europeans feel more comfortable viewing the world through an economic lens rather than the geopolitical lens.

“He didn’t say ‘Brussels’ at all – that’s a signal that he will work with like-minded partners, through the capitals, in Europe.”

Woman, 22, arrested on suspicion of murder after boy, 19, stabbed to death in South London