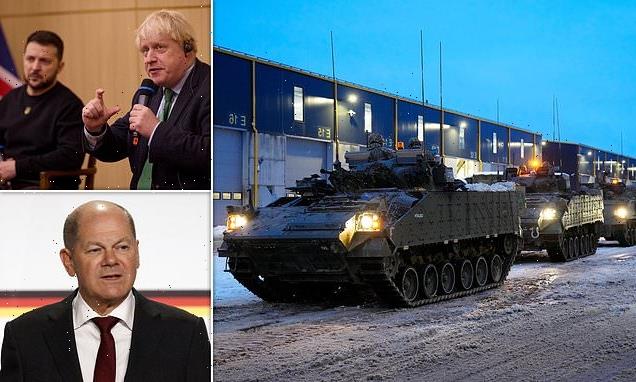 EXCLUSIVE ‘What the hell are we waiting for?’ Boris Johnson issues powerful rallying cry to the West as he urges nations to give Ukraine the weapons it needs to defeat Vladimir Putin now

Boris Johnson today implores the West to give Ukraine the weapons it needs to defeat Vladimir Putin now.

In an extraordinarily powerful – and emotional – rallying cry, the former PM says Kyiv can win the war this year if it gets the right equipment.

Mr Johnson says that with hundreds of tanks and other weaponry it can be ‘game over’ for Putin but, with Germany and others dithering, he asks: ‘What the hell are we waiting for?’

Britain is the only country to commit to sending tanks to help fight the Russians but the 14 assigned so far will not make a battle-winning difference.

Pleas from Ukraine’s Volodymyr Zelensky for Germany to release up to 2,000 Leopard 2 tanks operated by Nato states have been ignored. 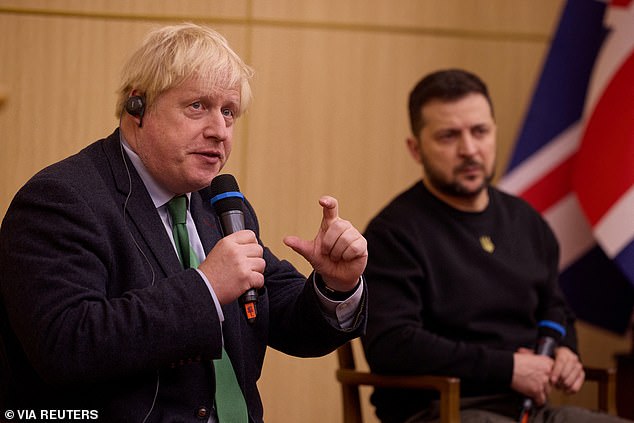 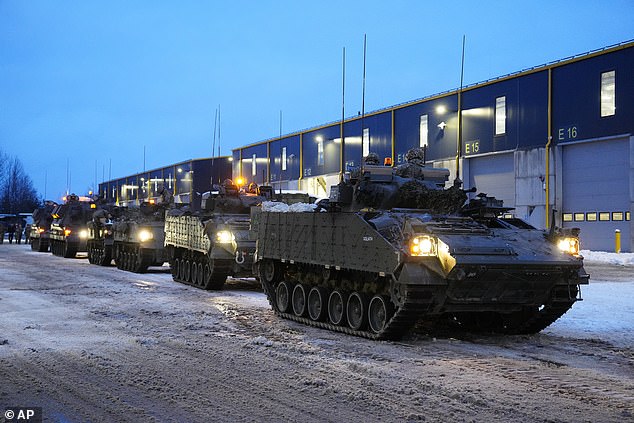 In a withering attack on Berlin’s excuses and delays, Mr Johnson warned the hand-wringing was costing lives and causing economic pain everywhere.

In an apparent shot across Rishi Sunak’s bows, he suggested no British tanks should be idling in this country when they could be used to liberate Ukraine.

Writing exclusively for Mail Plus, Mr Johnson said: ‘What conceivable grounds can there be for delay? Why are we not giving the Ukrainians all the help they need, now, when they need it?

‘The sooner we can help the Ukrainians to their inevitable victory, the sooner the whole world can begin to recover from Putin’s catastrophe. That requires the West to double and treble our support.

‘I am proud the UK is once again making the running. By sending 14 Challenger 2s, Ben Wallace has set an example. It is now time for others to follow our lead.

‘The Ukrainians need hundreds of tanks and they should be getting them from the Americans, the Germans, the Poles and many others.

‘Where does the Western world need to station those tanks, at the moment? Guarding North-Rhine Westphalia? Protecting Tennessee? Prowling the villages of Wiltshire?’ 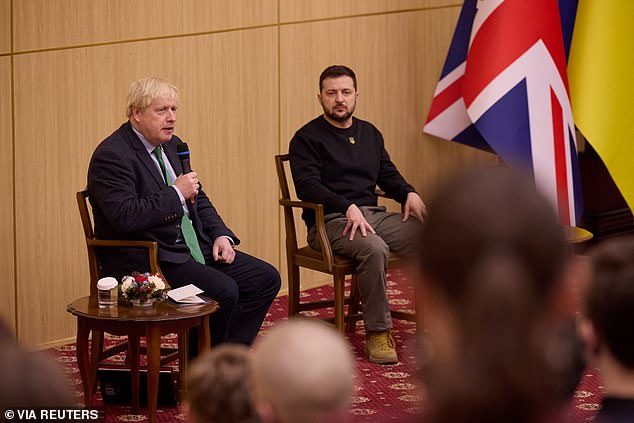 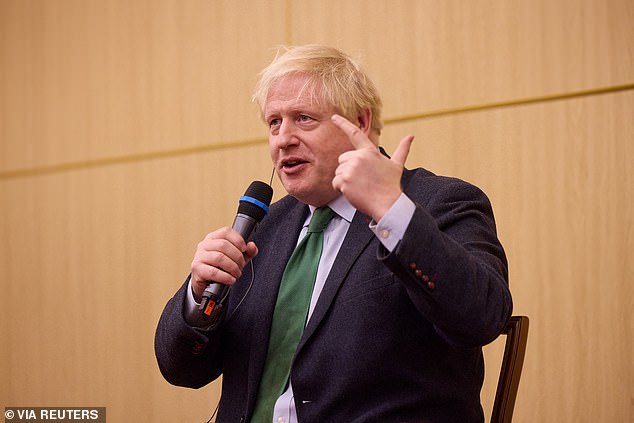 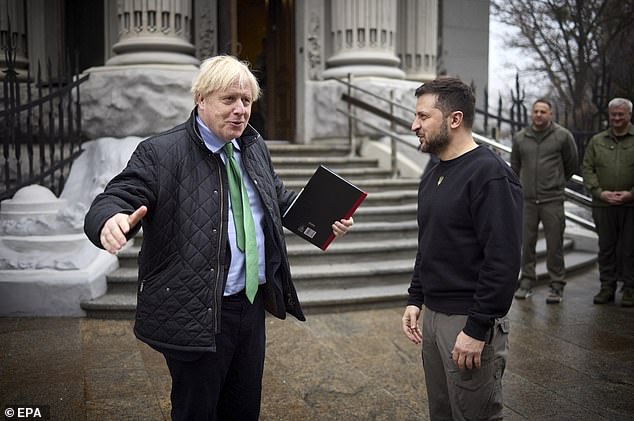 Johnson and Zelensky are seen in Kyiv yesterday 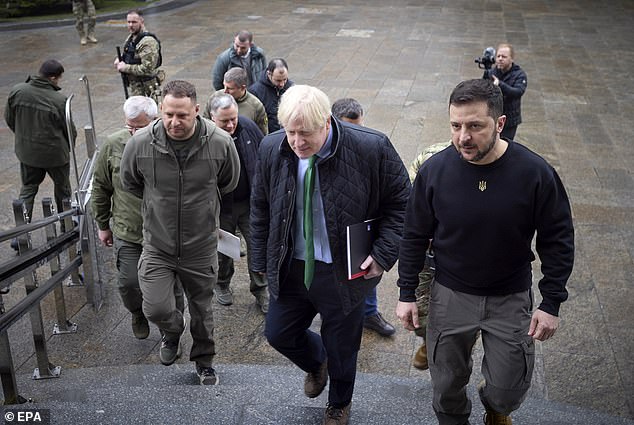 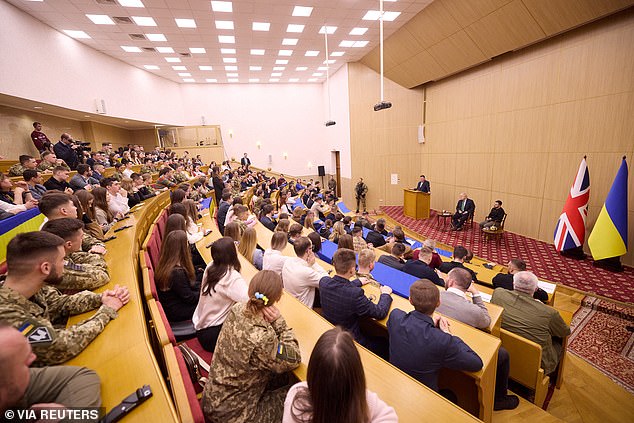 Mr Johnson’s call to arms follows his surprise visit to Ukraine at the weekend. He was invited by President Zelensky, who has previously singled out the ex-PM for praise.

Under Mr Johnson, the UK was the first country to supply military aid to Kyiv as Russia tanks rolled across its borders 11 months ago.

Mr Johnson, who also called for Ukraine’s bid to join Nato to be approved immediately, was pictured visiting Borodyanka, a town heavily damaged by Russian attacks. He said it was a ‘privilege’ to be there to show solidarity.

Writing for the Mail, he added: ‘Stand with me by the blackened remains of an apartment block in Borodyanka, the twisted plumbing and the smashed children’s toys. Look at what just one of Putin’s 500kg airborne bombs can do to an eight-storey building. 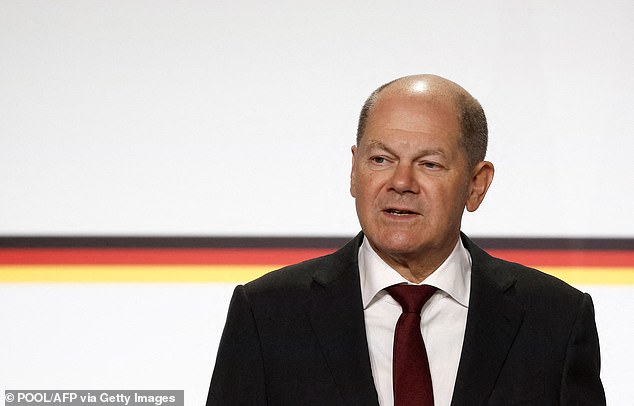 ‘Try to meet the pleading eyes of the people who pulled 162 corpses from the rubble, and who searched for the 28 whose remains were never found.

‘Look at those brave Ukrainians and answer me this question: just what the hell are we waiting for? Putin has no restraint, no scruple. With every day that goes by more innocents are sacrificed.

‘If you want to minimise the world’s economic pain, if you want to avoid the enormous cost – in blood and treasure – of letting this tragedy stretch on, then let’s together do the obvious thing. Let’s give the Ukrainians all they need to win now.’

Mr Johnson dismissed fears that sending tanks to Ukraine could escalate the conflict, convincing Putin and his Kremlin cronies they should resort to nuclear weapons.

He said he did not believe it ‘for a second’, due to the political fallout for Russia. He said Putin would lose the support of China, which is propping up the Russian economy, and ordinary Russians would turn against him.

The courage of the Ukrainians is such, according to Mr Johnson, that even a nuclear missile would not stop them fighting.