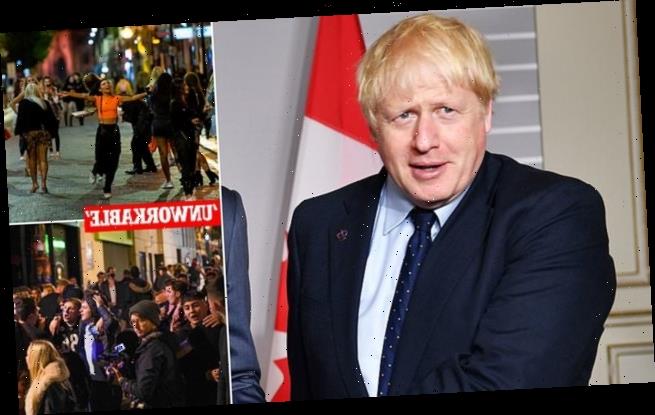 Boris to kill off the 10pm curfew: Lockdown WILL end on December 2, drinkers will be given another hour to prevent kicking-out crowds, ALL shops will open and a new three-tier system with some stricter rules will be introduced

Boris Johnson is to give Britain a pre-Christmas boost by scrapping the 10pm curfew on pubs and restaurants.

The Mail on Sunday understands that the Prime Minister intends to extend opening hours until 11pm when the second national lockdown ends on December 2. While last orders will still be called at 10pm, people will get an extra hour to finish drinks and meals.

As well as helping the hospitality sector, the plan – expected to be accepted in a crunch Cabinet meeting this evening – will help prevent crowds congregating on the streets at kicking-out time.

The 10pm curfew was widely criticised after its introduction in September and No 10 is determined to show it can both listen to its backbenchers and learn lessons when measures are unsuccessful. The proposal has widespread support. One Minister said: ’10pm last orders and being allowed to stay longer sounds eminently sensible.’

Mr Johnson will on Monday tell the House of Commons and the nation in a televised address that lockdown will end, as promised, on December 2.

He will also set out details of a new winter plan to tackle Covid, including a revised three-tier structure for restrictions. The new framework will run until the spring in a move designed to give businesses and the public more confidence and clarity while work continues on approving vaccines and a mass immunisation project. 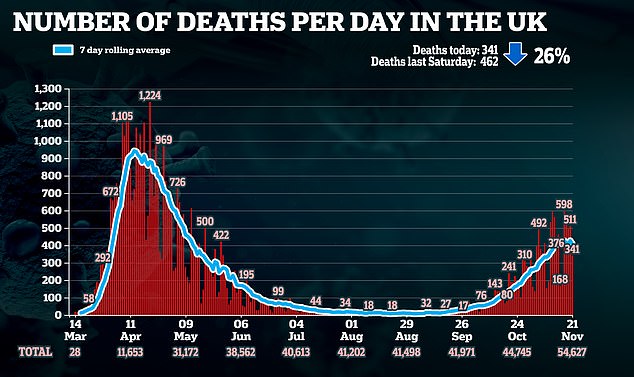 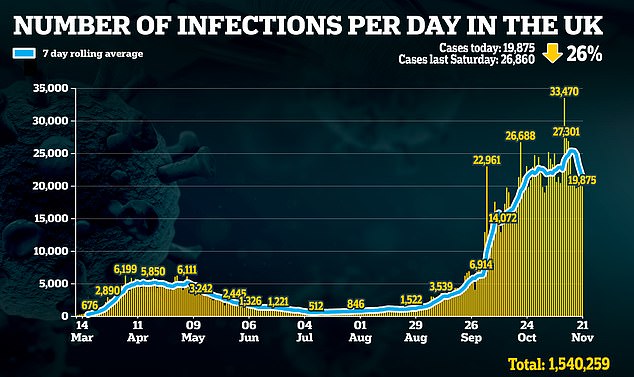 There is growing confidence that positive results from a trial of a vaccine being developed by Oxford University and the pharmaceutical firm AstraZeneca are ‘imminent’. Vaccines produced by Pfizer and the US firm Moderna have already been shown to be almost 95 per cent effective.

One Government insider said: ‘There is a possibility that one day soon we will wake up and Brexit will be done and we’ll have the Oxford vaccine.’

However, the revised tier system unveiled by Mr Johnson is expected to see more areas enter the highest third level. The final decision for which areas go into which tiers will be taken on Thursday.

While almost all shops will be allowed to reopen, bookmakers and so-called ‘wet pubs’ that do not serve food may be required to remain closed in places with the highest infection rates. There may also be harsher controls on households mixing indoors. ‘The new Tier 3 will look a lot tighter than the old version,’ a Government source admitted. 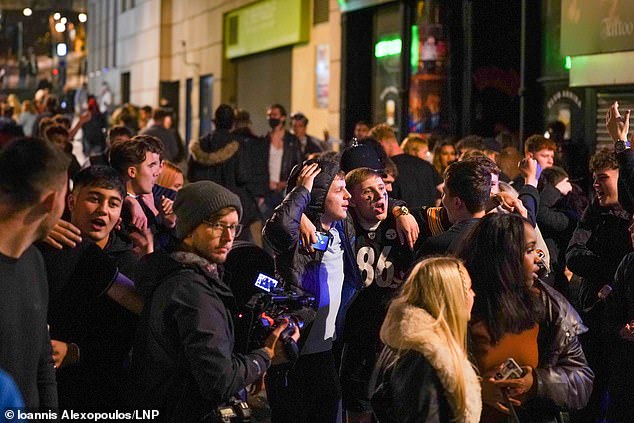 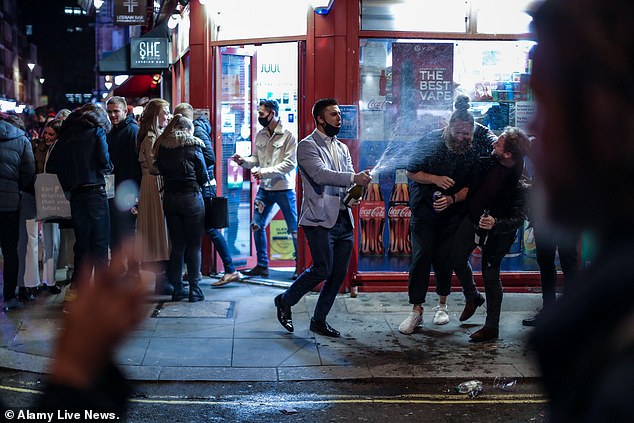 In Soho, revellers were often seen gathering in huge crowds after pubs closed, with many hugging and chanting in close proximity

However, restrictions on playing sport are set to be relaxed, while Ministers are having detailed discussions about allowing crowds in open-air stadiums – but the main sticking point is how to get fans to and from the events without risking infection on public transport.

Seeking to bolster confidence, Mr Johnson said in a speech yesterday: ‘My first message is ‘thank you’ for what you have done over the last very difficult eight months, my second is that there is hope on the horizon.’

The developments came as:

Ministers were yesterday continuing talks on whether and how restrictions might be lifted for Christmas. It is understood that a four-nation ‘truce’ will see all families across the UK allowed the same number of days to celebrate with their loved ones.

The Government is also in discussions about how it might allow some pantomimes to go ahead, although a wider opening of theatres is unlikely before next year.

Scientists last week warned that up to five days of tough lockdown could be needed to compensate for each day with fewer restrictions over Christmas. 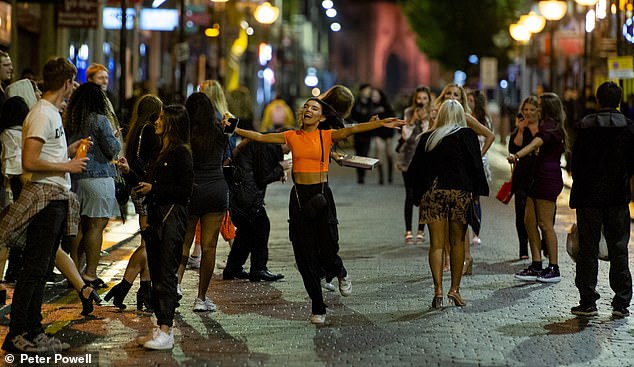 But Mr Johnson and Mr Sunak have emphasised the need to return to a ‘functioning economy’. A source said: ‘We’ve got to get normality back.’

Ministers are seeking to identify ‘morale boosting’ measures such as allowing people to watch live sport again or reopening cinemas.

‘That is an important element to consider,’ a Government source said. ‘[Paving a way to] allowing people to see the latest Bond film in the cinema would send a big signal that normality has returned.’ The renewed optimism is linked to the ‘transformative’ effect that the rollout of a vaccine or vaccines will have.

One source said Sir Patrick Vallance, the Government’s Chief Scientific Adviser, has had a ‘spring in his step’. 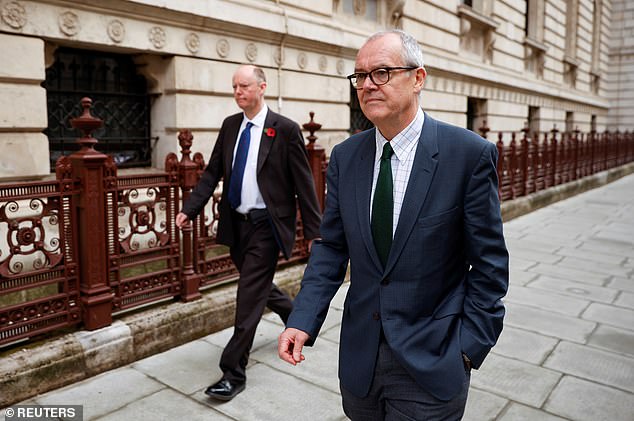 A source said Sir Patrick Vallance, the Government’s Chief Scientific Adviser, has had a ‘spring in his step’ this week

Ministers are now working on plans to keep some form of restrictions in place until late March when, according to experts, the bulk of vaccines could have been delivered. The restrictions will be subject to review if the data improves or worsens.

Ministers will pore over the latest data before finalising the new tier arrangements later this week.

The measures will then be voted on in Parliament. While some Tory MPs have raised concerns that gyms and the beauty industry will be an ‘afterthought’, the Treasury is understood to be pushing for them to be allowed to reopen on December 2.

A source said: ‘Businesses such as gyms, beauty salons are dying to open and have made themselves Covid safe.

‘People want to get their nails done before Christmas – it’s a huge season for these businesses.’ 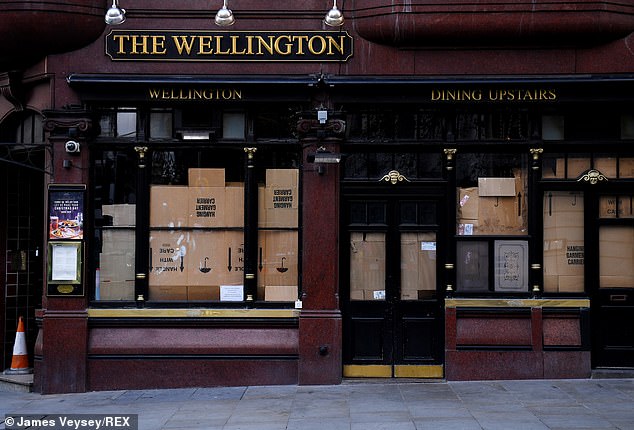 However, 70 Conservative MPs have written to the Prime Minister saying they will not vote for the reintroduction of the tier system unless the Government sets out the reasoning behind every ongoing restriction.

The letter, organised by Steve Baker and former chief whip Mark Harper, warns that Ministers ‘must publish a full cost-benefit analysis of the proposed restrictions on a regional basis’.

A No 10 spokesman said: ‘Everyone’s efforts during the current national restrictions have helped bring the virus back under control, slowed its spread and eased pressures on the NHS.

‘But the Prime Minister and his scientific advisers are clear the virus is still present – and without regional restrictions it could quickly run out of control again before vaccines and mass testing have had an effect.’