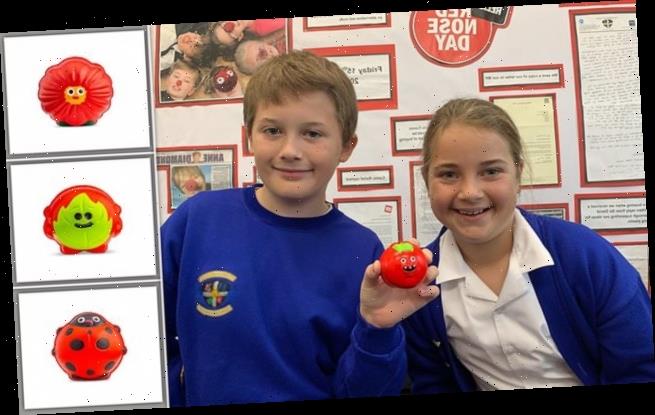 Comic Relief has ditched plastic red noses in favour of a plant-based alternative after children set up a campaign with the backing of David Attenborough.

The charity is launching a plant-based nose for 2021 made from bagasse, a natural by-product of sugarcane, created over 18 months of testing and research into sustainable alternatives.

Comic Relief had been working on an alternative when, in early 2019, schoolchildren from Fourlanesend Community Primary School in Cornwall started making their own sustainable noses out of household goods – while still donating the cost of the plastic nose to the charity. 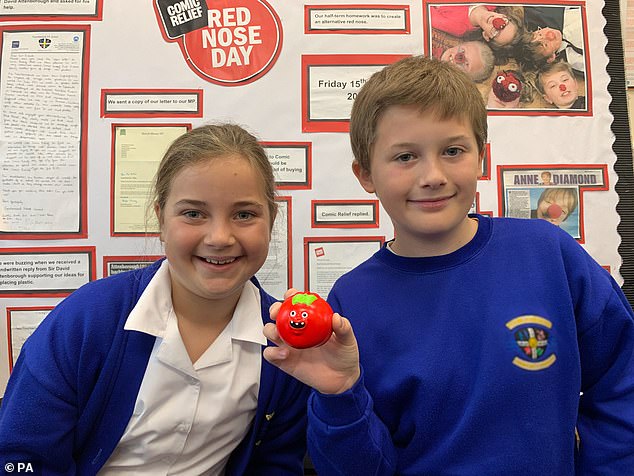 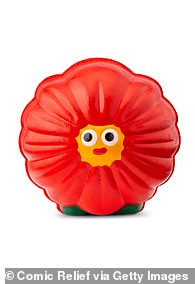 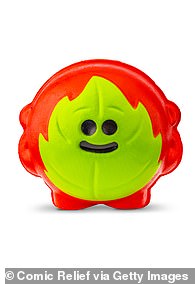 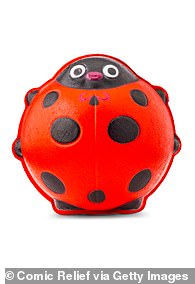 The charity is launching a plant-based nose for 2021 made from bagasse, a natural by-product of sugarcane, created over 18 months of testing and research into sustainable alternatives

Brodie, a pupil at Fourlanesend, told the BBC: ‘We started campaigning because we noticed that on our seaside there was lots of plastic.

‘We decided to write a letter to Comic Relief saying that we really like your charity, we think it is a good idea, but this year we want to stop the use of single use plastic on red noses and we are going to use alternatives.’

The children wrote a letter to David Attenborough, who gave his backing to the campaign. He wrote: ‘I think you’re perfectly correct to raise the question of replacing plastic products wherever we can and I hope you get an adequate answer from Comic Relief.’

On what he thinks of the alternative, Brodie added: ‘It feels different because it is not squidgy. The last ones were polystyrene and these ones are quite hard.’

Curtis praised the children for their campaign and said the charity did everything it could to limit the environmental impact of the noses – even making sure they were brought to the UK by sea rather than on an aeroplane. 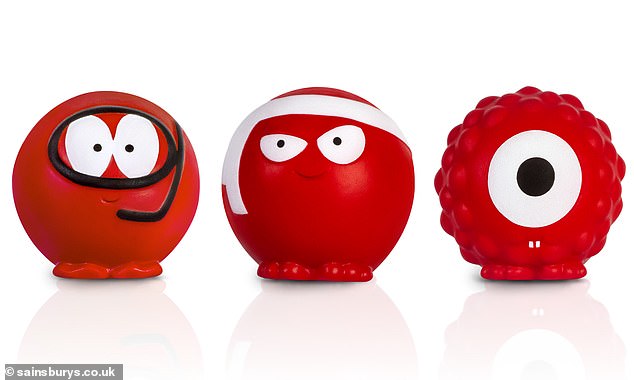 The plastic-free noses will replace the old versions (pictured, the designs used in 2015) as part of Comic Relief’s efforts to tackle climate change 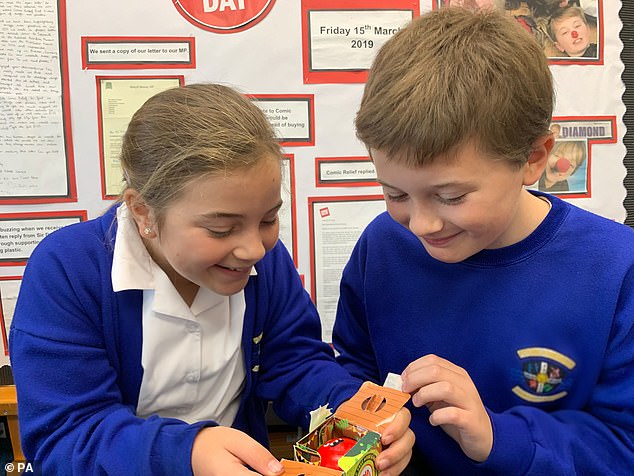 Pupils aged between five and 10 from the Cornwall school were given a first look at the new noses today. Pictured, Lauren and Brodie open up a nose’s box

He said: ‘We had been working on it beforehand but I do think we are at an interesting time, especially with the climate debate, where the energy is coming from the young.

‘This is the whole purpose – that you have got a younger generation who is pushing even harder and making you even more aware.

‘Even though I remember thinking and worrying, “What is Comic Relief doing about the environment?”‘

He revealed Comic Relief already works in Africa to move people from jobs that lead to deforestation and ‘into jobs where women don’t have to earn their money just by selling trees’. 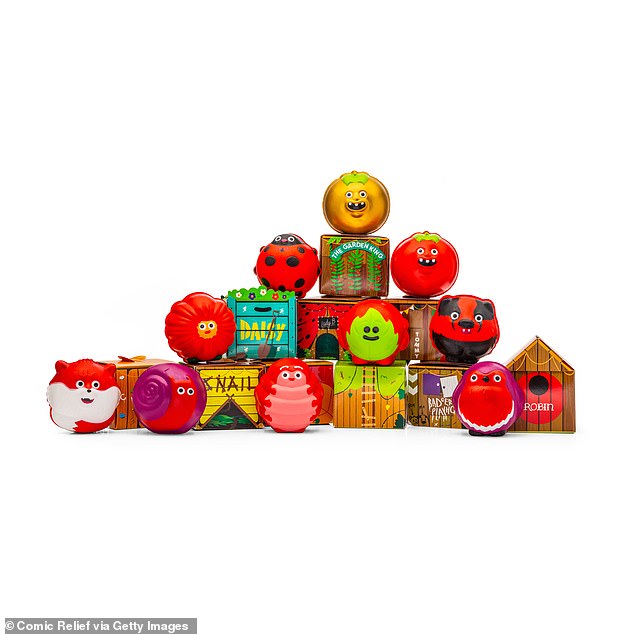 The noses (pictured) will be available in ten different animal characters including a squirrel, fox and badger

‘But there is absolutely no doubt that a bit of tactical nudging by some passionate kids definitely made a difference. That’s a good thing and what we would hope of people who support Comic Relief,’ he added.

Pupils aged between five and 10 from the Cornwall school were given a first look at the new noses today. They will be available in ten different animal characters including a squirrel, fox and badger.

Nine-year-old Lauren, a pupil at Fourlanesend Community Primary School, added: ‘Here at school, and in our local community we are very passionate about reducing our use of plastic, so it’s a really good feeling knowing that what we’ve done has encouraged Comic Relief to create a plastic-free nose.

‘We were all so excited when we heard the news, it’s something each and every one one of us will always remember and be very proud of.’

A spokesman for Comic Relief UK told MailOnline: ‘There absolutely won’t be a return to plastic red noses for Comic Relief UK. This is just the start. We are trying to find more genius ways to go green. Hopefully everyone will see how brilliant it is.

‘Kids around the world are demanding that we all go plastic free and we are really really proud of this.’ 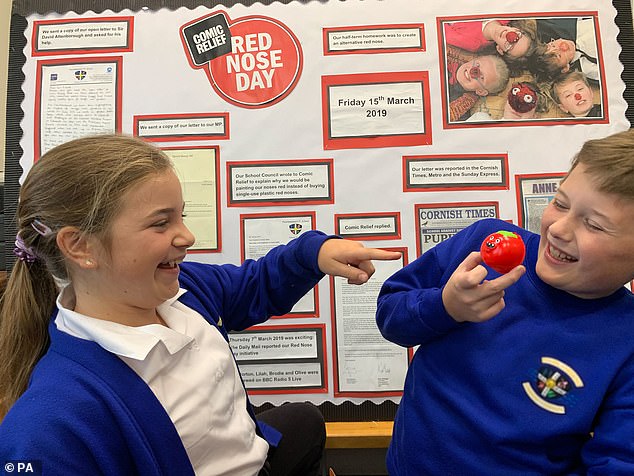 Comic Relief’s new nose is not compostable but the charity says it will improve the design year-on-year and hopes to have one in the near future. Pictured, Lauren and Brodie today

The children will meet a virtual panel of guests including Curtis, environmental broadcaster Liz Bonnin and TV presenter Ore Oduba, to discuss the new nose and their views on the environment.

Comic Relief’s new nose is not compostable but the charity says it will improve the design year-on-year and hopes to have one in the near future.

Explaining the charity’s drive to become more environmentally friendly, Curtis said: ‘It really is complicated, these things. When you do start to focus on it, this is one of the great things, it is a long journey.

‘For instance, we did a lot of work on the paint because you have got to make sure the paint is also not doing any damage to the environment. And also, you have got to check on the working conditions of the people who make it. 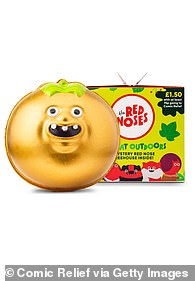 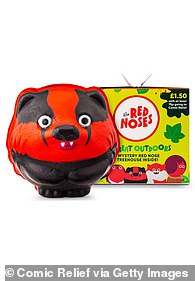 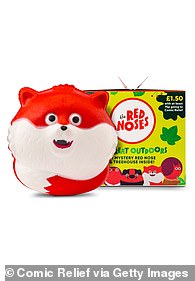 Other designs include a golden ‘gardening king’ (left), a badger (centre) and a fox (right). The noses will be sold for £1.50, with at least 75p going to Comic Relief

‘That was another thing when we were trying to find the suppliers. Also, they are being sent by sea, they are not being flown, so it is sea freight.

‘At every point we are trying to take out plastics, take out the environmental damage of the product itself and the paint used in the product and the way that the product is moved around.’

Rebecca Norton, head teacher at Fourlanesend Community Primary School, said her pupils ‘care passionately’ about plastic after seeing ‘so much plastic waste wash up on the shores of our beaches’.

She said: ‘They are such huge supporters of Comic Relief and really wanted to see the Nose change so they could continue supporting the work they do.

‘The children were the driving force behind contacting our local press in 2019 and writing to Comic Relief and can’t quite believe this has all happened.’