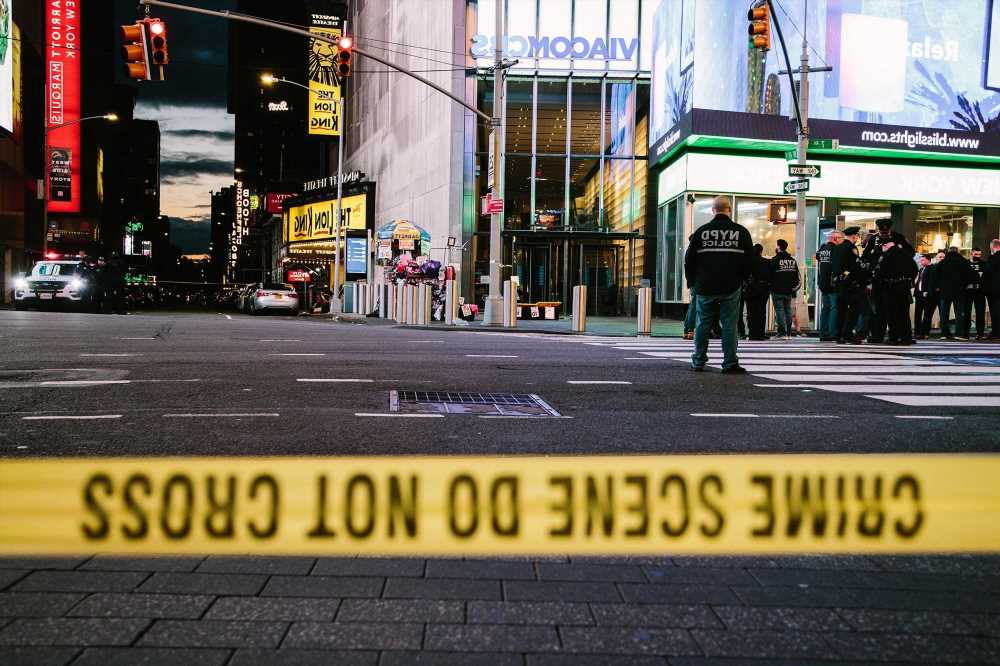 Learn to live with filth, disorder and crime in de Blasio's NYC

Stringer disgraced himself by accepting the NYC teachers union's endorsement

Andrew Cuomo's insidious lies are finally catching up with him

Gov. Cuomo is on the verge of being done for good

If someone hadn’t been so thoughtless as to put a toy store in Times Square, a toddler in a stroller might not have been shot there late Saturday afternoon, along with a tourist from Rhode Island and another visitor from New Jersey.

The toddler and her parents had come over from Brooklyn for toy shopping; the Crossroads of the World is oh-so-tentatively beginning a post-pandemic recovery, you see, so why not?

That’s when some moron from who knows where, beefing with other morons over whatever it is that morons beef about these days, pulls a .25-cal. pistol and opens fire. Down go the toddler and the tourists, up goes the yellow crime-scene tape, and into the wind go the morons.

The wounds were not life-threatening, thank God. Traumatizing is something else, of course — to the victims and to the Big Apple itself.

But speaking of morons, here’s what Mayor Bill de Blasio had to say later Saturday: “The flood of illegal guns into our city must stop.”

That horse has been out of the barn since forever; illegal guns are everywhere, and for all practical purposes, they always will be.

The trick — make that the challenge — is to keep them off the streets and out of the waistbands of gangbangers and morons with anger-management issues.

Gotham successfully met that challenge a generation ago, while painfully transforming itself from a crack-wars charnel house into the Safest Big City in America™.

But it also actually happened, and now the city is in a spiral ­descent into Dinkinsville, because its political class once again lacks the self-confidence — and the self-respect — necessary to keep guns off the street.

So how about some Critical Safe Streets Theory — that is, how about a look at the intersectionality of out-of-control crime, official cowardice and the malign power of ideological bullying? Careful not to step in the blood spatter.

Thirty years ago, the crack-cocaine turf wars were tearing New York City apart. There were 2,600 murders in 1990, a record, and City Hall lacked the courage and imagination to do more than tally the bodies.

Then came men who understood that tending to minor ­offenses dramatically reduced major crime — that targeting subway turnstile jumpers, for example, cut gun crime, because the jumpers began to leave their weapons at home.

The new quality-of-life ­ap­proach, along with related ­accountability reforms and strict attention to detail, had a cascading effect: Violent-crime rates dropped dramatically.

The safe-streets happy time lasted for two decades, until the arrival of de Blasio and his ideological siblings-in-arms.

A public-policy sea change — powered by the bizarre notion that criminals must themselves be considered victims if vigorous law enforcement produced racially disparate arrest patterns — swept over New York.

De Blasio and his merry band of ethnicity-huckstering fellow travelers were on the scene. Results-driven minor-crime policing ceased. Four of the city’s district attorneys began to mail it in. And Albany lawmakers made it nearly impossible to keep even career criminals off the street.

And for every cause, there usually is an effect. Is it a coincidence that this sharp decline in quality-of-life policing was followed by a brief pause, then a triple-digit ­increase in gun violence?

The NYPD speculated that Saturday’s shooter escaped via subway. What do you suppose the odds are that he swiped his MetroCard as he fled the scene? Or that he even has one?

Obviously he had a gun. But would he have brought it to Times Square if NYPD Commissioner Dermot Shea hadn’t disbanded his phenomenally successful anti-crime/anti-gun units a year ago? Would the city’s housing projects and adjacent streets be war zones?

Well, sow and reap, as they say.

De Blasio says illegal guns are to blame. But he is lazy, brain-dead and all tired out.

Toddlers in Times Square are paying the price.