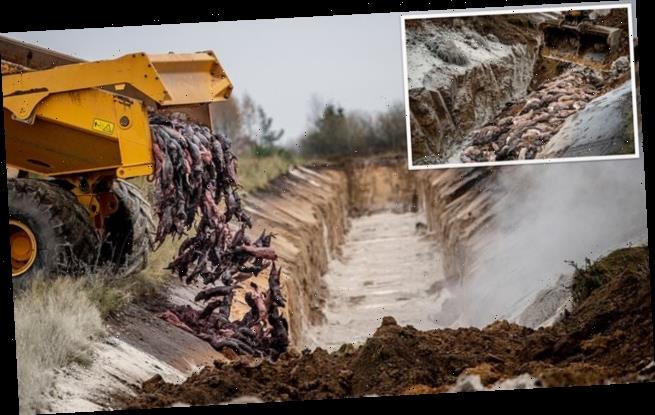 More than 17million mink are being culled and dumped in mass graves in Denmark today in a desperate bid to eradicate a mutated strain of coronavirus.

The new Covid-19 variant – called Cluster 5 – has caused widespread alarm because it has the potential to render vaccines less effective if it spreads through populations.

Danish officials are trying to stomp it out before its unleashed on the general public, though so far it is only known to have infected 13 people in northern Denmark.

Shocking photos showed diggers and construction lorries offloading thousands of dead mink into ditches this morning, with workers in hazmat suits spraying down the vehicles with disinfectant.

The Danish environmental and health authorities announced the animals were being buried in mass graves on military land near the northwestern town of Holstebro because there are not enough incinerators to burn all of the corpses.

Scientists believe the virus jumped from fur farm workers to mink in the summer before being passed back to humans. As it crossed between species, a mutation occurred on its ‘spike’ protein, which it uses to enter human cells.

It’s significant because the leading vaccine candidates – including Pfizer’s jab, which was yesterday revealed to be 90 per cent effective – work by targeting this protein.

Although there is no proof yet that the strain can hamper vaccines’ effectiveness, the location of the mutation means it is theoretically possible. 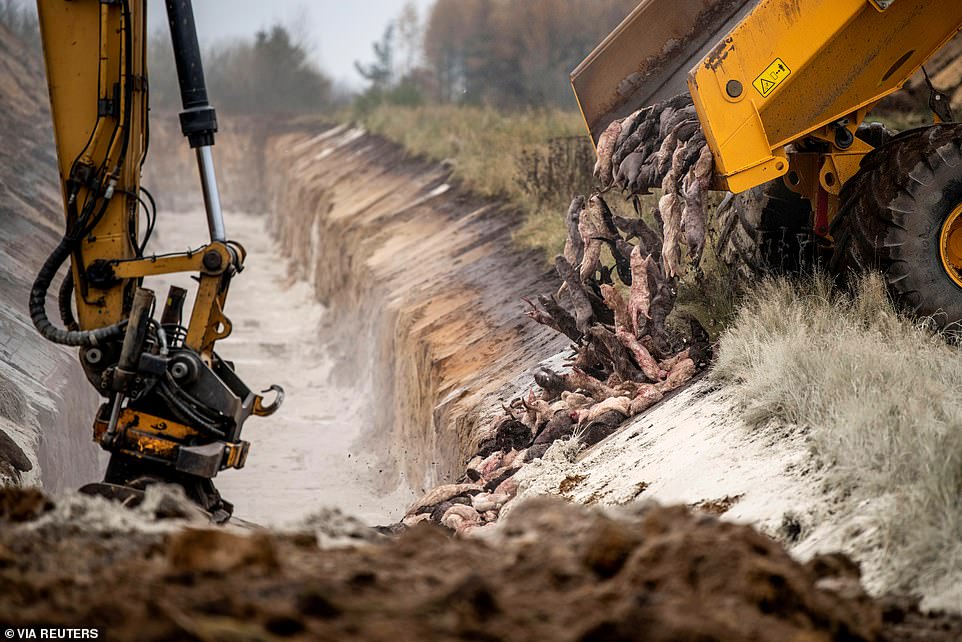 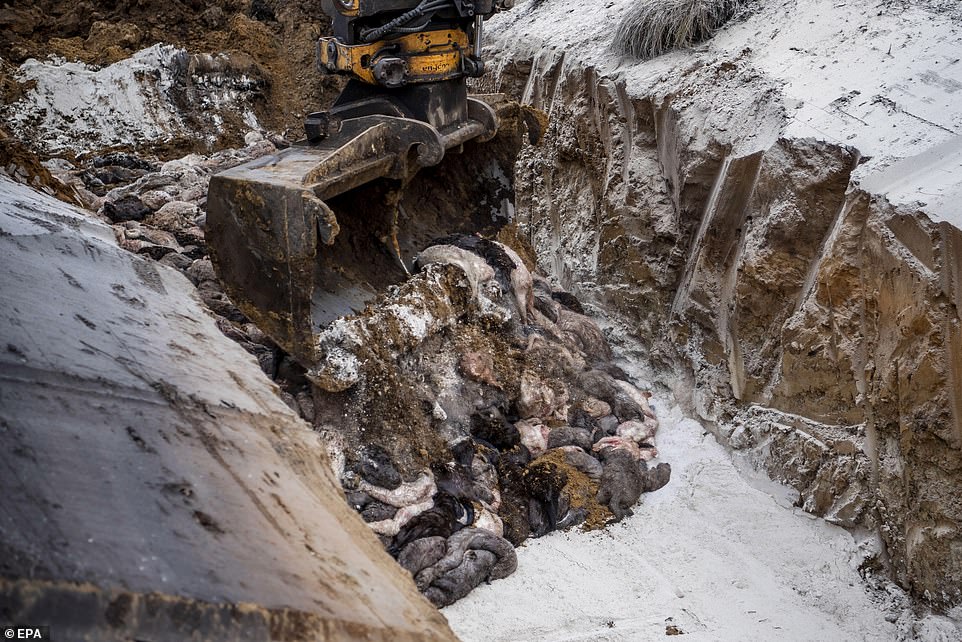 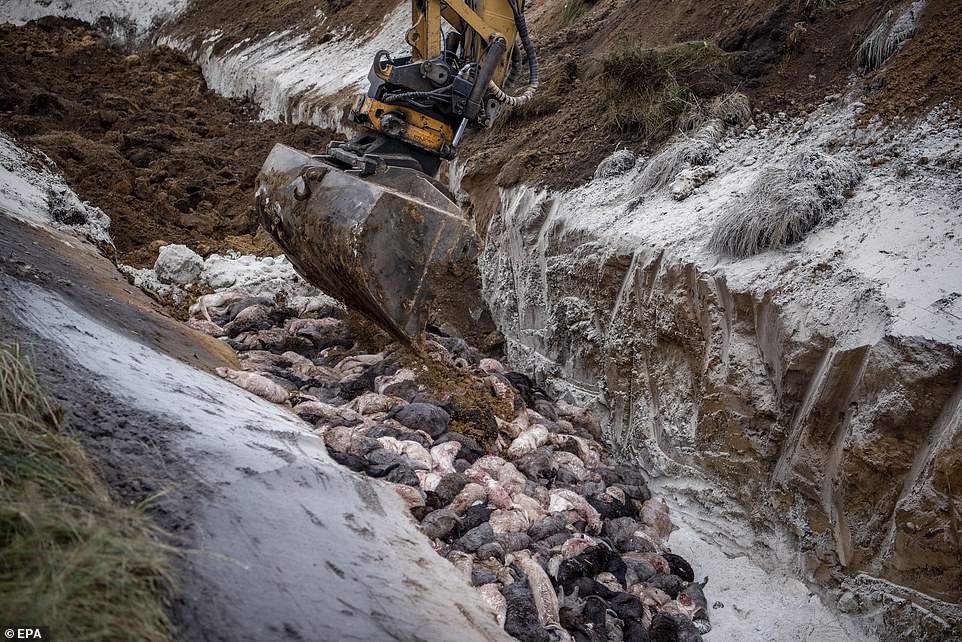 Danish officials are trying to stomp it out before its unleashed on the general public, though, so far, it is only known to have infected 13 people in northern Denmark 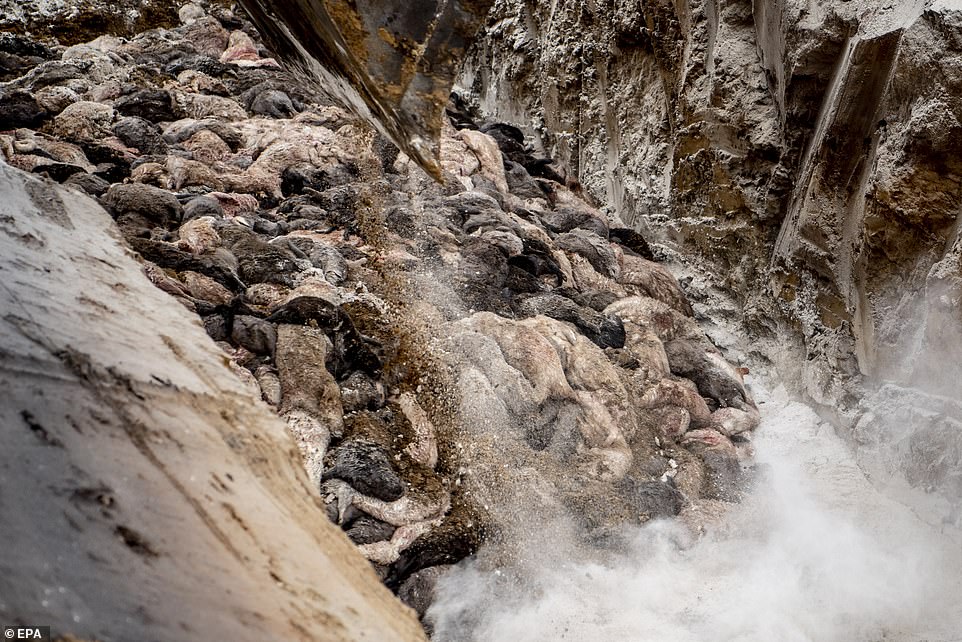 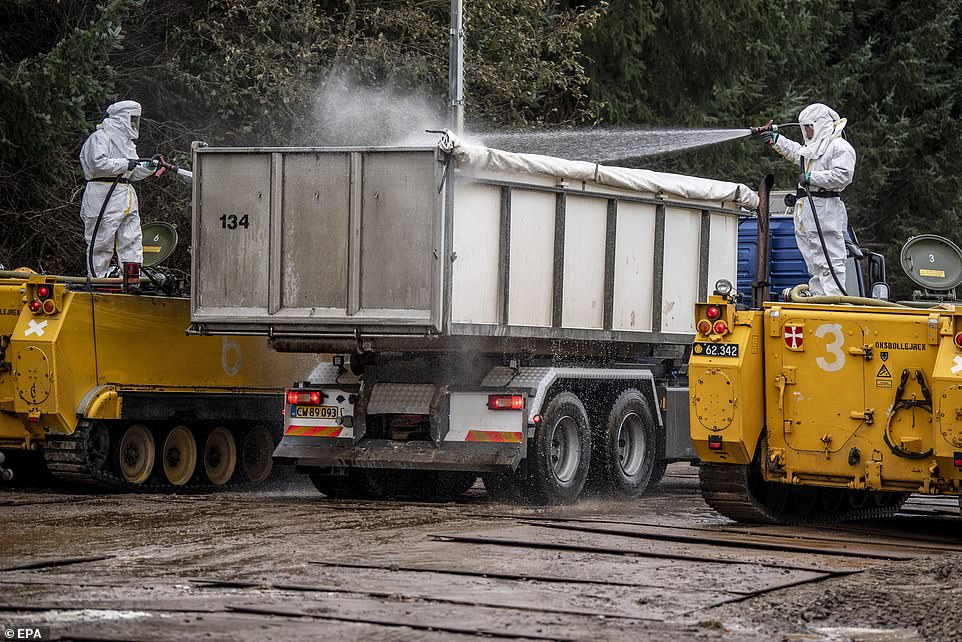 UK guidance published yesterday means anyone admitted to hospital who has recently returned from Denmark will be treated in ‘strict’ quarantine.

It also says people who test positive for Covid-19 within a fortnight of arriving from the Scandinavian nation must be isolated and sent to a specialist infectious diseases centre for further tests.

UK officials fear a new variant of the virus could spark a fresh wave of new cases while the country is already in the midst of a second epidemic.

There is no evidence yet to suggest the new variant is any more infectious or deadly than the coronavirus infecting most people currently. And there are currently no known cases in the UK.

At the weekend non-British travellers coming from Denmark were banned from entering the UK, as health officials try to block the mutated strain from reaching British shores. 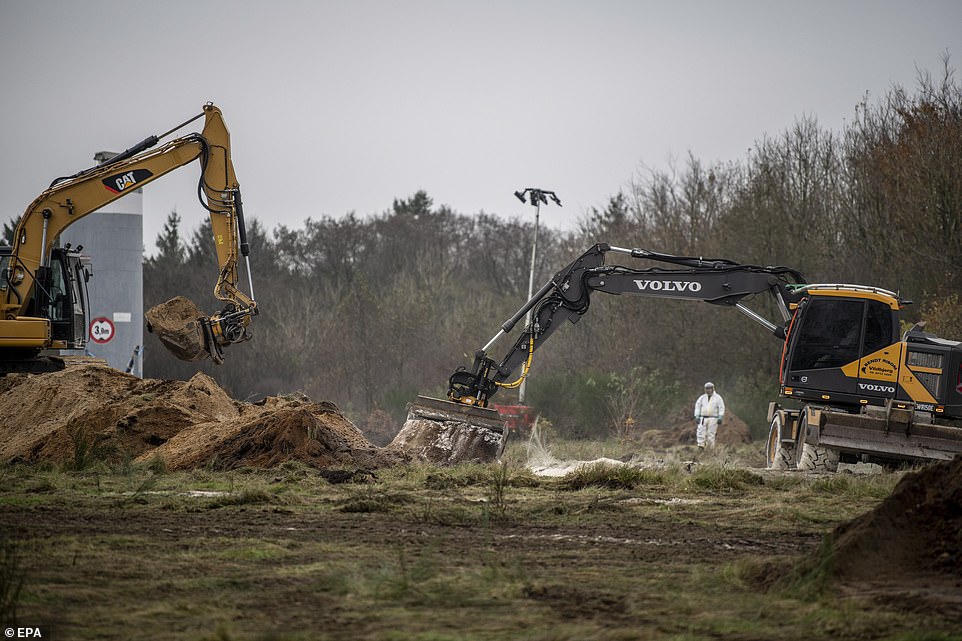 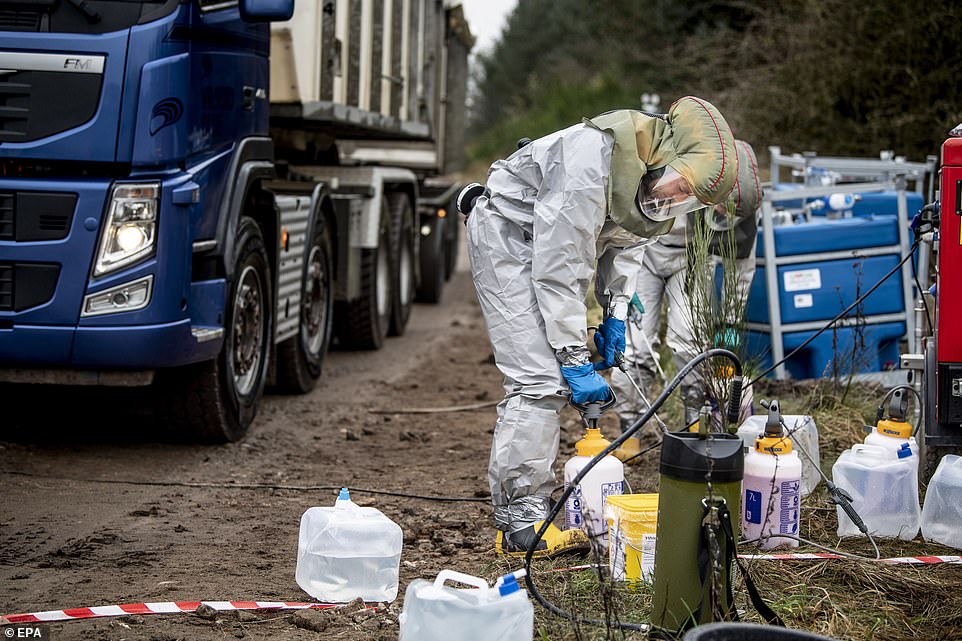 Danish mink will be buried in mass graves on military land as the country’s incinerators and rendering plants struggle to keep up, the Danish environmental and health authorities announced

Planes and ships from Denmark are now also being denied permission to land or dock in the UK and foreign lorry drivers are to be turned back from the border if they have recently travelled through the country.

Brits who have been in Denmark within the past 14 days must also self-isolate with their entire household.

WHAT IS THE NEW COVID-19 STRAIN AND SHOULD YOU BE WORRIED?

What is going on in Denmark?

The coronavirus which originated in China and is currently racing through the world’s population was passed from humans to mink.

When it entered the mink population the virus was forced to mutate to multiply inside its new host and spread among the animals, creating a new strain.

At some point this new variant was then passed back to humans.

Should we be worried?

So far experts believe the new strain – known as Cluster 5 – is not more infectious or deadly than previous versions.

But there is a concern that it is less sensitive to antibodies – substances produced by the immune system to fight off infections.

Vaccines work by training the body to be able to unleash a wave of antibodies when the virus tries to infect people.

This has raised concerns that it might render any future Covid-19 vaccine less effective if it were to spread.

Danish specialists have warned it could theoretically start a new pandemic.

How did it happen?

All viruses naturally mutate as they spread.

The sole purpose of the virus is to replicate as many times as possible, and many pathogens evolve over time in order to become more infectious — which often makes them less deadly so they can survive for longer and be spread to more people.

It is believed SARS-CoV-2 originated in bats before jumping to humans in China, possibly via an intermediary species such as a pangolin.

Mink in Denmark are believed to have caught the virus from infected workers at fur farms.

The virus then mutated in the minks before ‘spilling back’ to reinfect humans.

Are there any mink in the UK?

The risk of something similar happening in the UK is low because fur farming has been banned here since 2002.

There are populations of wild mink in the UK after they were shipped over from America for fur farming decades ago.

But people rarely come into close contact with wild mink, meaning the threat of Covid-19 transmission is low.

Five different strains of mutant mink coronavirus have been spotted in 214 people in Denmark since June. Analysis by Denmark’s State Serum Institute revealed only one of these – known as Cluster 5 – is less sensitive to antibodies.

Antibodies are disease-fighting proteins made and stored by the immune system to fight off invaders in the future by latching onto their spike proteins.

But if they are unable to recognise proteins because they have mutated, it means the body may struggle to attack a virus the second time and lead to a second infection.

It raises fears the new strain could be harder to treat or vaccinate against.

Cluster 5 has been found in 12 people living in North Jutland – which has been placed under lockdown – and one person living in neighbouring Zealand.

Of the five farms where it was identified, only three of them were linked to four people with the infection, suggesting the strain is spreading between humans in the community.

The Department of Health and Social Care said: ‘There is no evidence to suggest a new strain of Covid-19 from Denmark is in the UK and, while there have been some reports of mink to human transmission, we do not consider this a risk as there are no fur farms in the UK.

‘We are working closely with international partners and we continue to keep the situation under review.

It is not uncommon for viruses to be able to jump between humans and other animals – which was also the case for H5N1, or bird flu, and H1N1, swine flu.

The sole purpose of any virus is to replicate as many times as possible. So when a virus jumps from one species to another it naturally mutates to adapt to a new host.

With Covid-19, tiny changes in its DNA occurred when it was passed to mink. It means that when the virus was passed back to humans its biology was different, so it may behave differently to other strains while inside humans.

Experts do not know if it will make the disease more infectious or deadly in humans, but they have warned it has the potential to.

Professor Ian Jones, a virologist at the University of Reading, told MailOnline: ‘The virus jump is the result of it being transmitted to mink by the animal handlers and finding the ability to replicate in mink cells.

‘Mink is obviously a permissive species for the virus but in the process certain mutations, which are always present at some level, are selected as that form of the virus does better in mink cells compared to human.

‘This gives the mink virus, which can then spread easily among the very dense populations of animals on mink farms.

‘It happens in other viruses too, influenza for example, but it generally stops there.’

He added: ‘In theory, the mink form, which has mutations in the spike protein, could then evade the immune response generated to the vaccines currently in development and form Covid-19-2.

‘There are a lot of reasons why this would not happen easily, but it is a formal possibility which is why the mass cull has taken place.

‘Genetic drift in the virus is to be expected and cases like this do need tracking but my risk assessment would be that this is currently only a low-level threat.’