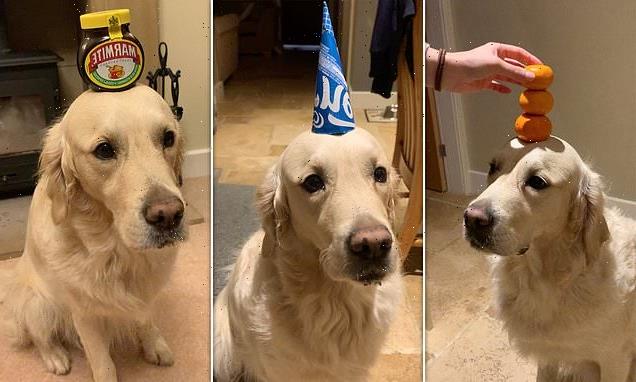 Stay! Patient pooch Dexter sits still as he balances fruit, butter and even a jar of Marmite on his head

A talented golden retriever has shown he is the perfect etiquette coach by being able to balance objects on top of his head.

Dexter, four, from Derby, has been demonstrating his extraordinary skills by balancing Marmite jars, stacked fruit, eggs and even whole pizzas on his head – showing off his exemplary posture.

The footage, which was posted on TikTok, shows Dexter adorably sitting down, whilst brothers, Benjamin Watts, 24, and Oliver Watts, 18, balance different objects on his head as he patiently waits for a treat in return. 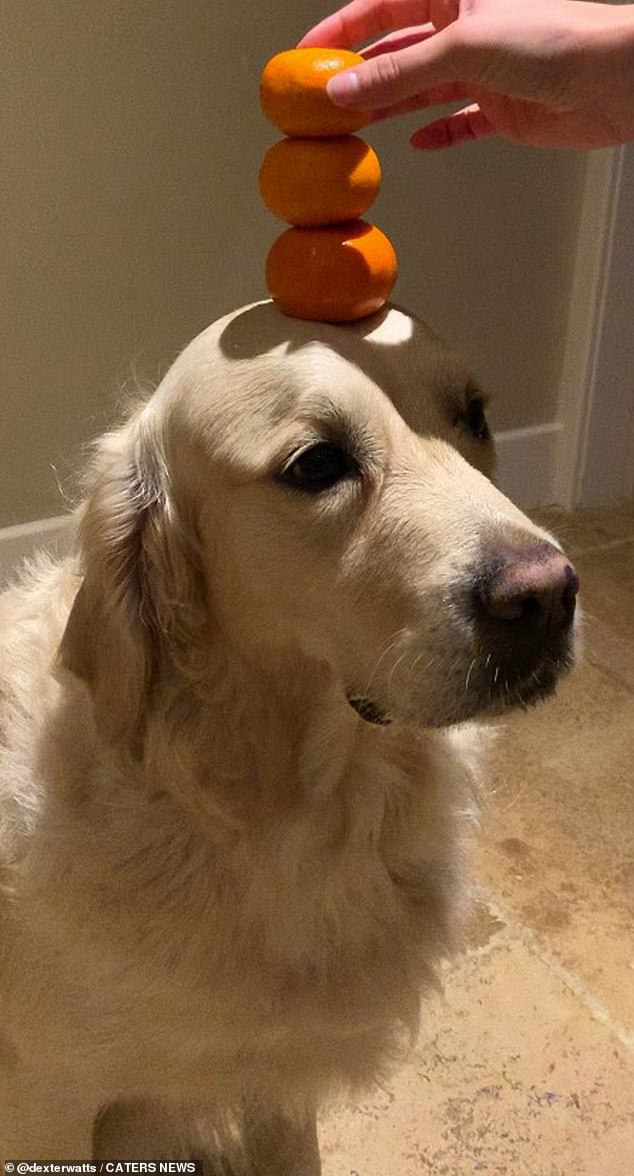 A four-year-old golden retriever, named Dexter, from Derby, has been demonstrating his extraordinary skills by balancing Marmite jars, stacked fruit, eggs and even whole pizza’s on his head 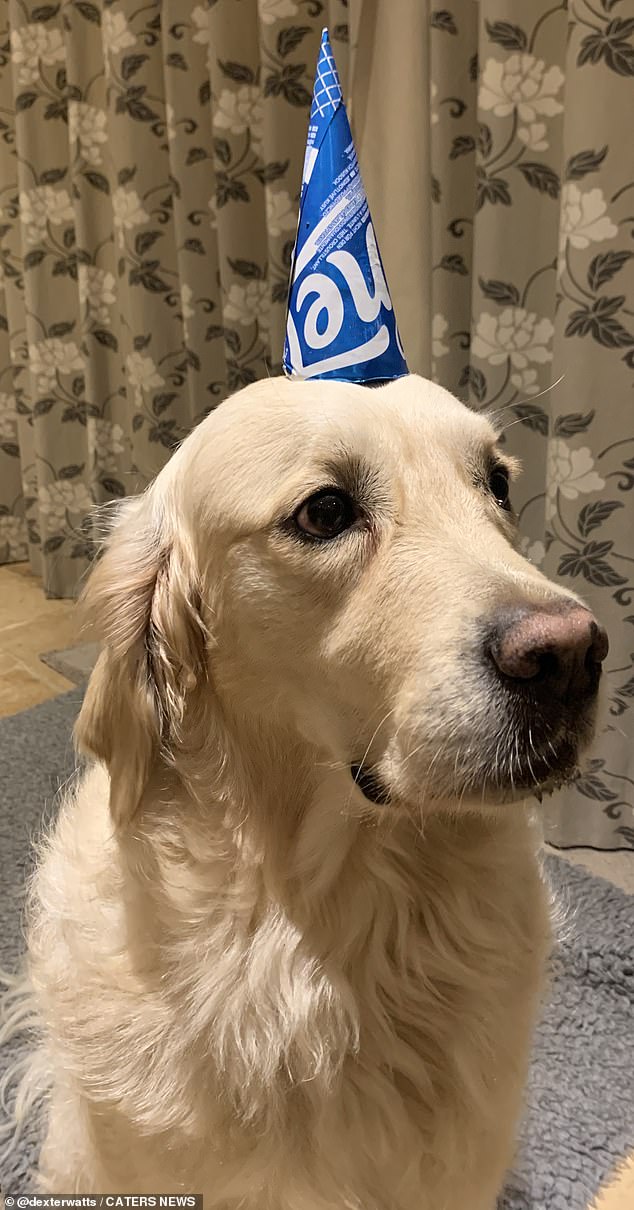 Dexter has created several videos on TikTok, which have since gone viral, his most viewed has received a whopping 7.3 million views

The four-year-old golden retriever has fans from all across the world who comment on how amazing he is. One user said: ‘Dexter is so cute!’

Benjamin and Oliver have been posting Dexter’s content online and have amassed over 660,000 followers across the world on TikTok.

To a video of Dexter balancing a strawberry on his head, one user said: ‘Bravo, bravo’.

Another added: ‘SO cute!’

Speaking about their cute canine, Benjamin said: ‘Dexter is just the happiest dog around.

‘His balancing trick is something we figured out he could do from when he was about one years old, so we immediately tried to teach him to perfect the skill.

Benjamin said: ‘He’ll do it for anyone as long as there’s a fantastic treat waiting for him afterwards.

‘His usual go to favourite foods are chicken, cheese and sausages, so we always make sure to have some for when he is doing a trick.

‘One of the main reasons he’s so talented is because he is completely food orientated and will do anything for tasty food.’

The adorable dog has gotten over 8.6 million likes on TikTok, with a lot of videos hitting well over a million views at a time.

Benjamin said: ‘He has tonnes of viral videos on TikTok now, with his most viewed TikTok video on something like 7.3 million views now which is amazing. 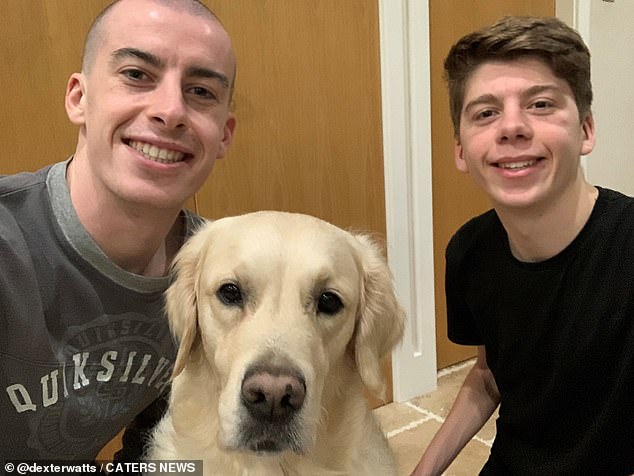 The footage, which was posted on TikTok, shows Dexter adorably sitting down, whilst brothers, Benjamin Watts, 24, (Left) and Oliver Watts, 18, (Right) place objects on his head

‘He always gets comments on TikTok saying how amazing, cute and talented he is.’

It took Benjamin just a week to teach him the ropes, and before long Dexter became a balancing pro.

He added: ‘We first taught him to ‘stay’ which involves him staying absolutely still.

‘Once he mastered this, then we could put things on his head and say ‘stay’, we would repeat this word and then eventually take the balancing object off his head and treat him.

‘He knows that if he doesn’t stay still then he won’t get a treat until he does and he’s now gotten incredibly good at it.’

Benjamin believes that the teaching of tricks and skills helps dogs in the long run to lead better lives.

He explained: ‘As soon as we got him, we started training him, as not only does this create an attentive dog, but also stimulates their minds keeping them busy and happy.

‘He’s very clever and as soon as he learnt the basics, we started to push the boat out. With the balancing it was no different.’

Benjamin’s family adopted Dexter when he was just eight weeks old in May 2017. 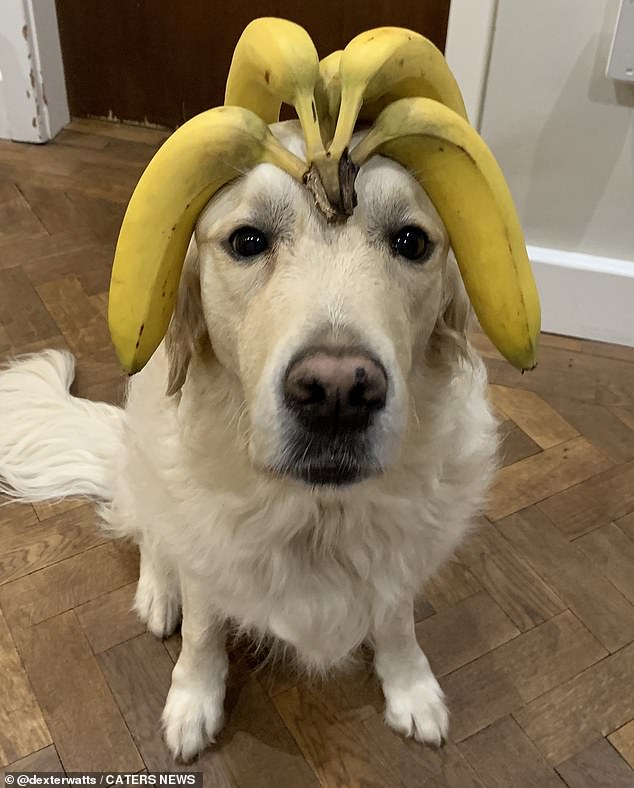 When the objects are placed on Dexter’s head, he patiently sits and doesn’t move – showing off his perfect poise

He added: ‘He’s an incredibly loving and calm dog

‘As he’s a retriever, whenever anyone comes home, he’ll quickly run to hold a blanket or a toy in his mouth and greet you whilst his tail wags in a windmill fashion.’

Outside of the home, Dexter is as excitable as it gets and always looks forwards to his walks.

Benjamin said: ‘Rabbits, pheasants, ducks and squirrels are hobbies of his and he will be constantly chasing them without fail!

‘This has led to countless occasions where he jumps over barbed-wire fences or into rivers which is always makes for an interesting walk.

Dexter has shown that no object is too big or small, and he will always rise to the challenge

‘Tug-of-war is also something he has mastered and never seems to tire of, even if we have been at it for 20 minutes or more.’

Benjamin said how Dexter has become ‘the focal point of the family’, with everything revolving around him.

He explained: ‘We’ve often described him as the burning fire in the family home as he brings that warmth and joy.

‘Dexter is wholly reliant on us – we have the responsibility to protect him and give him a healthy lifestyle which means watching his diet and giving him two countryside walks a day.

‘Dexter, and Golden Retrievers more widely, rely on social connections – he needs us just as much as we need him which is why in the house he lies down in the middle of the kitchen where everyone walks past!’

You can watch Dexter’s amazing tricks on TikTok @dexterwatts.