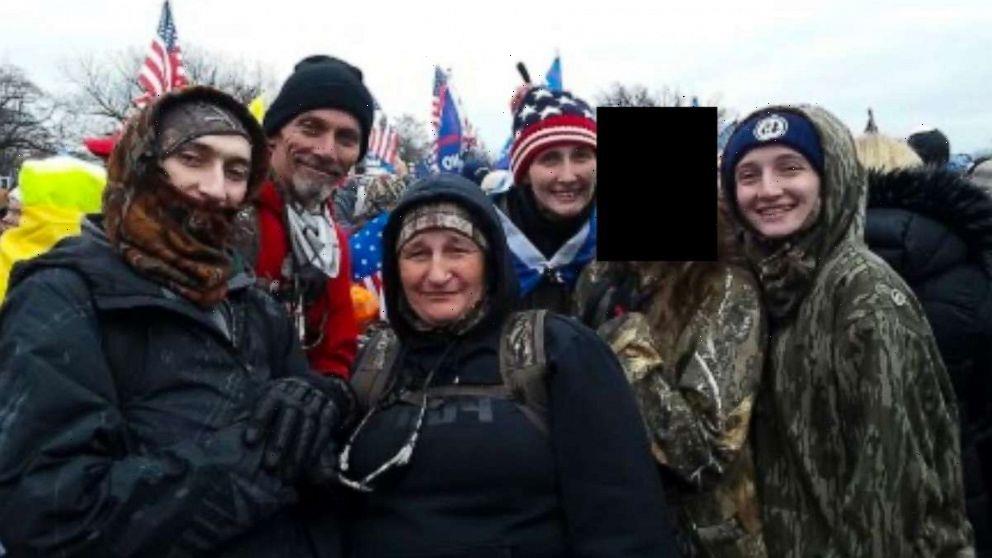 Five members of the same Texas family were arrested Tuesday and charged for their alleged participation in the Jan. 6 riot at the U.S. Capitol, according to newly-unsealed charging documents.

Kristi Munn, Tom Munn, Dawn Munn, Josh Munn and Kayli Munn — described by prosecutors as a nuclear family from Borger, Texas — are now each facing four federal charges over their alleged illegal entry and alleged disorderly conduct in the Capitol, according to a criminal complaint filed Tuesday afternoon.

A 34-page affidavit for their arrest details their movements while inside the Capitol on Jan. 6, based on surveillance and social media posts.

The affidavit also indicates that the family brought an unidentified minor child into the building with them, who is not being charged.

While there have previously been arrests of family members including fathers and sons, mothers and sons, and husbands and wives, the Munn family is thus far the largest single family unit out of the more than 530 arrests made so far from the Justice Department’s investigation of the Capitol riot.

FBI officials say they first received a tip that Kristi Munn participated in the Capitol riot just three days after the insurrection, from a tipster who captured screenshots of Munn’s Facebook and Snapchat accounts. Investigators then combed through public Facebook posts from Munn’s family members to track their journey from Texas to D.C. as they amplified calls for a march on Congress on Jan. 6.

After the riot, investigators found posts from the family where they discussed joining in the insurrection.

“The only damage to the capital building was several windows and sets of doors,” Tom Munn wrote on Facebook. “Nothing inside the capital was damaged. I can tell you, patriots NEVER made it to the chamber. There was no violence in the capital building, the crowd was NOT out of control … they were ANGRY!!!”

Prosecutors have said in recent court filings that the riot caused at least $1.5 million in damage to the U.S. Capitol, including damage from those who made it into the Senate chamber. At least 140 law enforcement officers suffered injuries from the riot and more than 100 people have been charged so far with direct assaults on police, according to the DOJ.

After gathering screenshots showing the five members of the Munn family inside the Capitol, investigators say they further confirmed the family members’ identities through interviews with three people familiar with the family in Texas — including two employees at a local Borger high school “who had taught multiple Munn children,” and an employee at a college who taught two of the Munn children.

None of the members of the family have entered pleas in their case, and attorney information was not immediately available for them as of Tuesday afternoon.