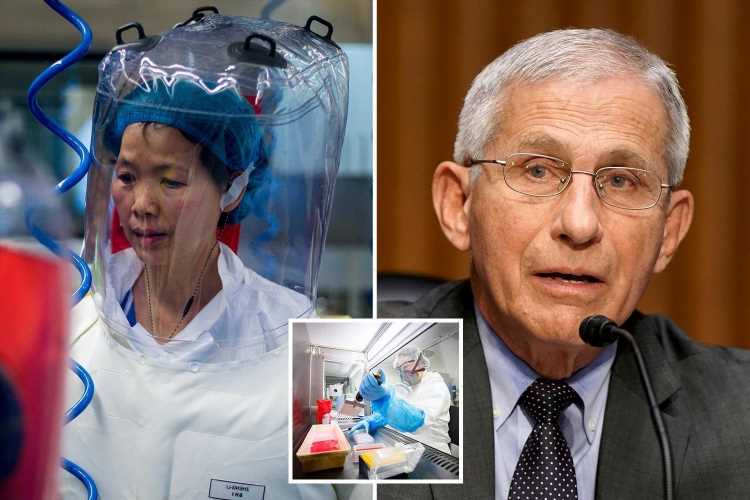 ANTHONY Fauci dismissed an email warning about China's Covid "cover-up" at the start of the pandemic because it was "too long" for him to read.

Emails obtained by Buzzfeed show how Dr Fauci, 80, was sent a lengthy message by physicist Erik Nilsen about his "suspicions" over China's true Covid death toll and warned of a "tsunami" of infections in the US. 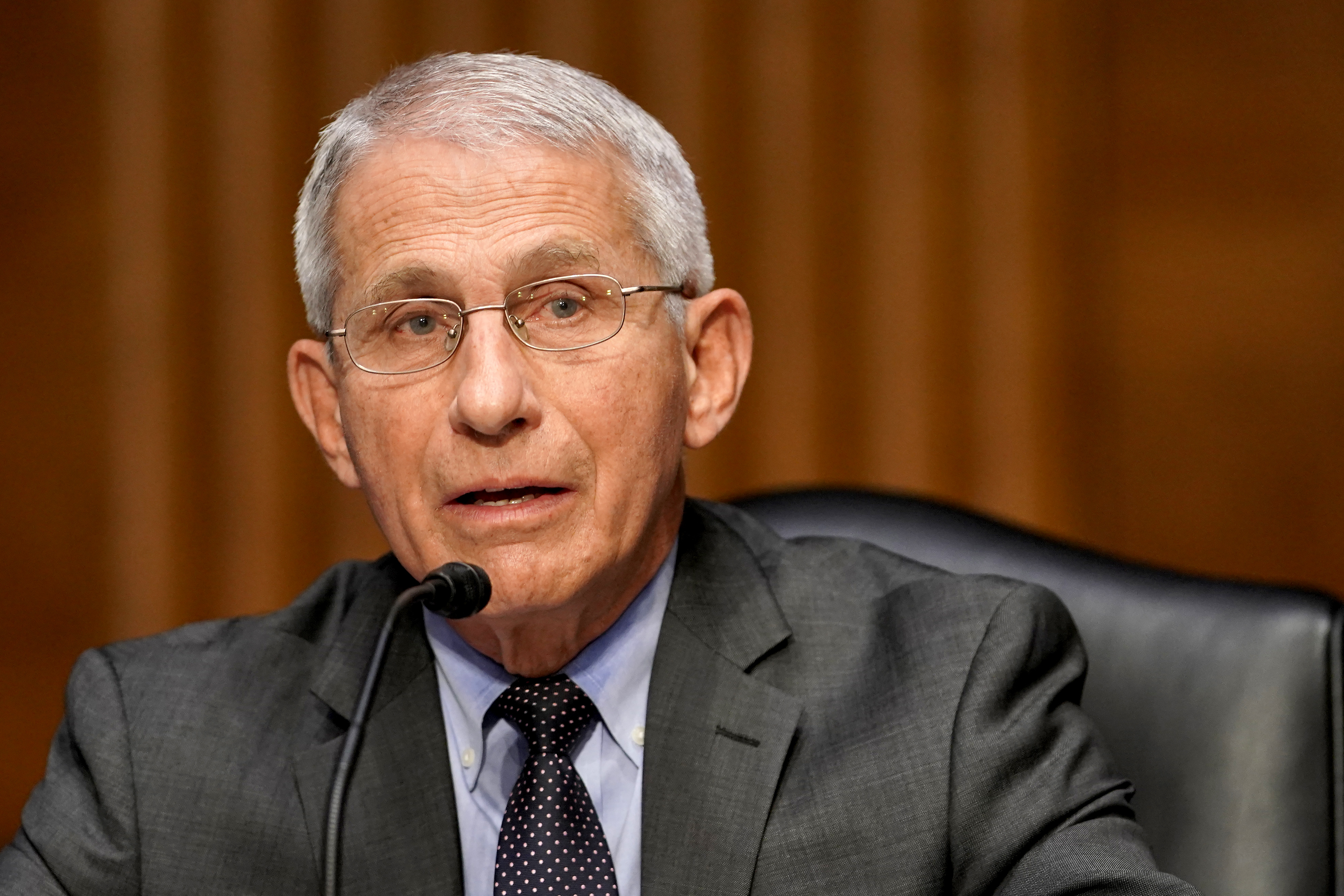 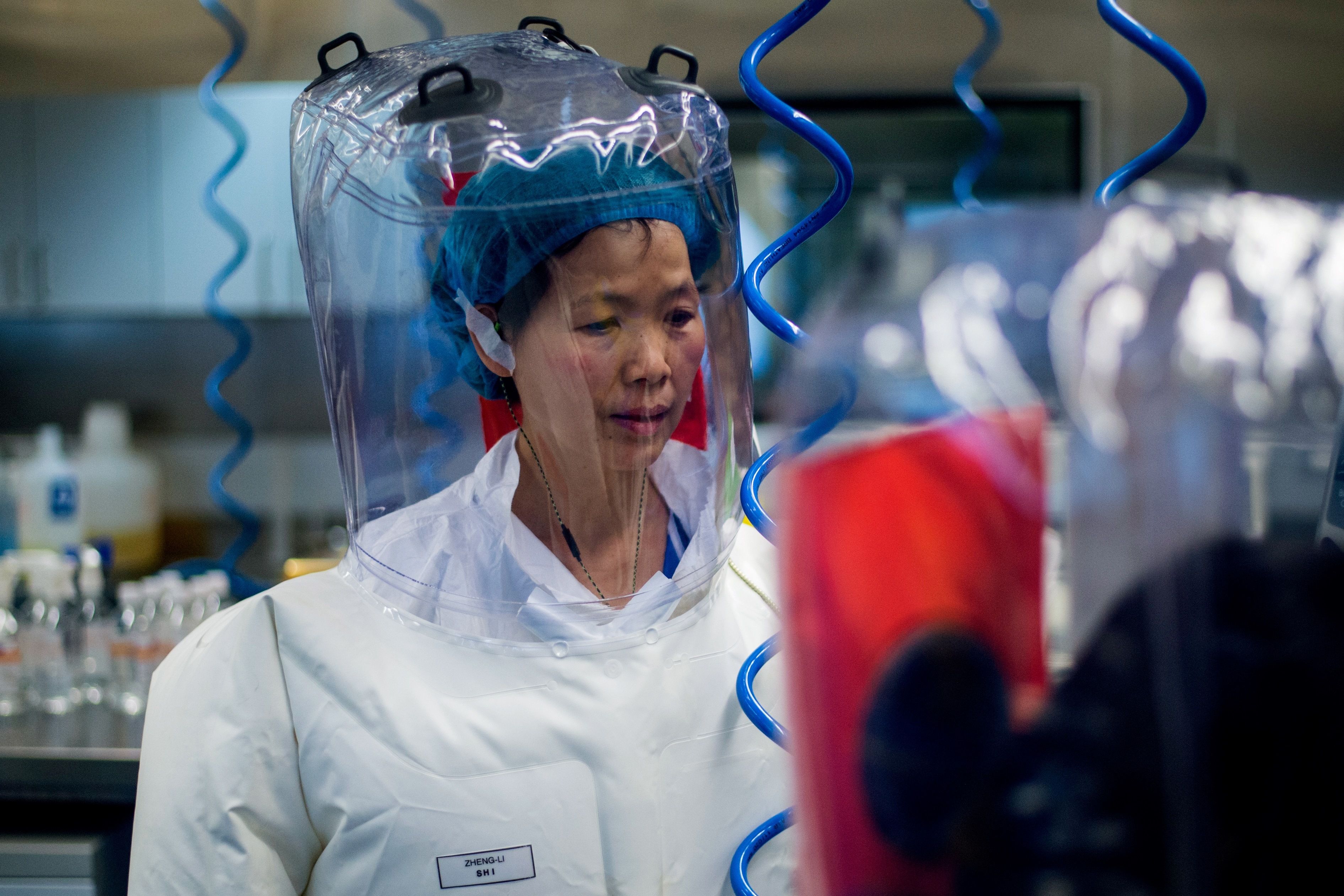 More than 3,000 pages of Dr Fauci's emails were obtained by Washington Post, Buzzfeed News and CNN through the Freedom of Information Act.

The email from Nilsen to Dr Fauci on March 18, 2020 states: "I'm convinced you already know the outbreak is way past the point of containment, and, unfortunately, herd immunity will soon ensue."

"I'm writing to make sure you already know or at least suspect
everything I'm about to tell you," Nilsen, the boss of Texas-based Bio-Signal Technologies, wrote.

"I need to clear my conscience because it's possible (albeit unlikely) that some of what tell you is new and possibly useful in, at least, saving lives in the USA."

"They've been adding fabricated data daily to show (to save face) the world and their own people an impressive flattening of China outbreak curve."

He added: "My suspicions were eventually confirmed by at least two of my sources in China… the data posted by China is not only garbage, it has misled the world into a false sense of security." 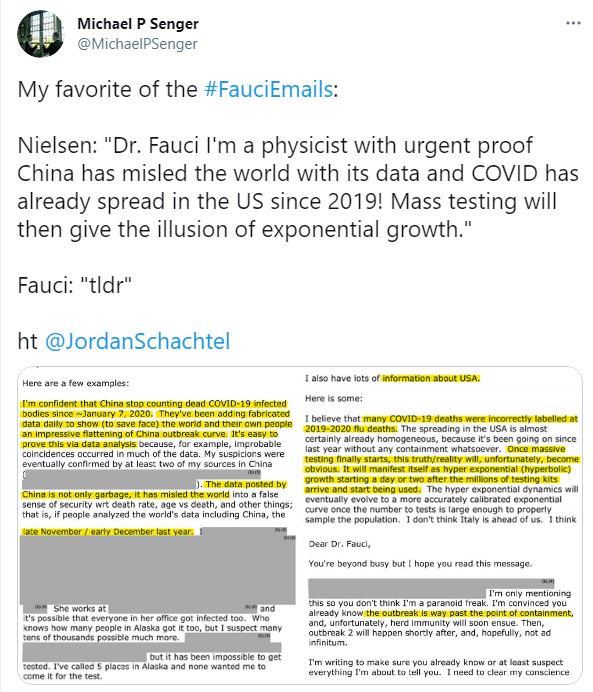 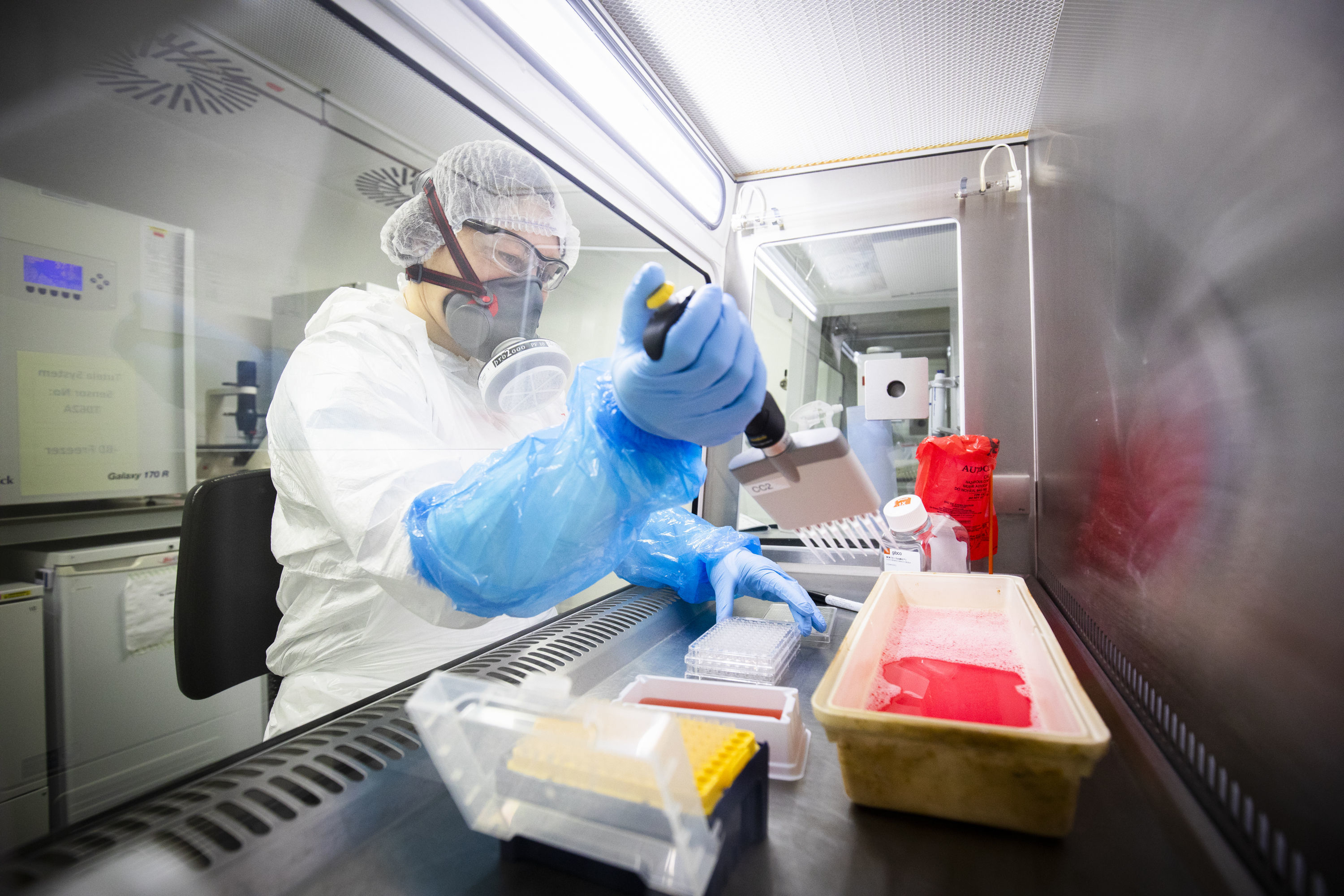 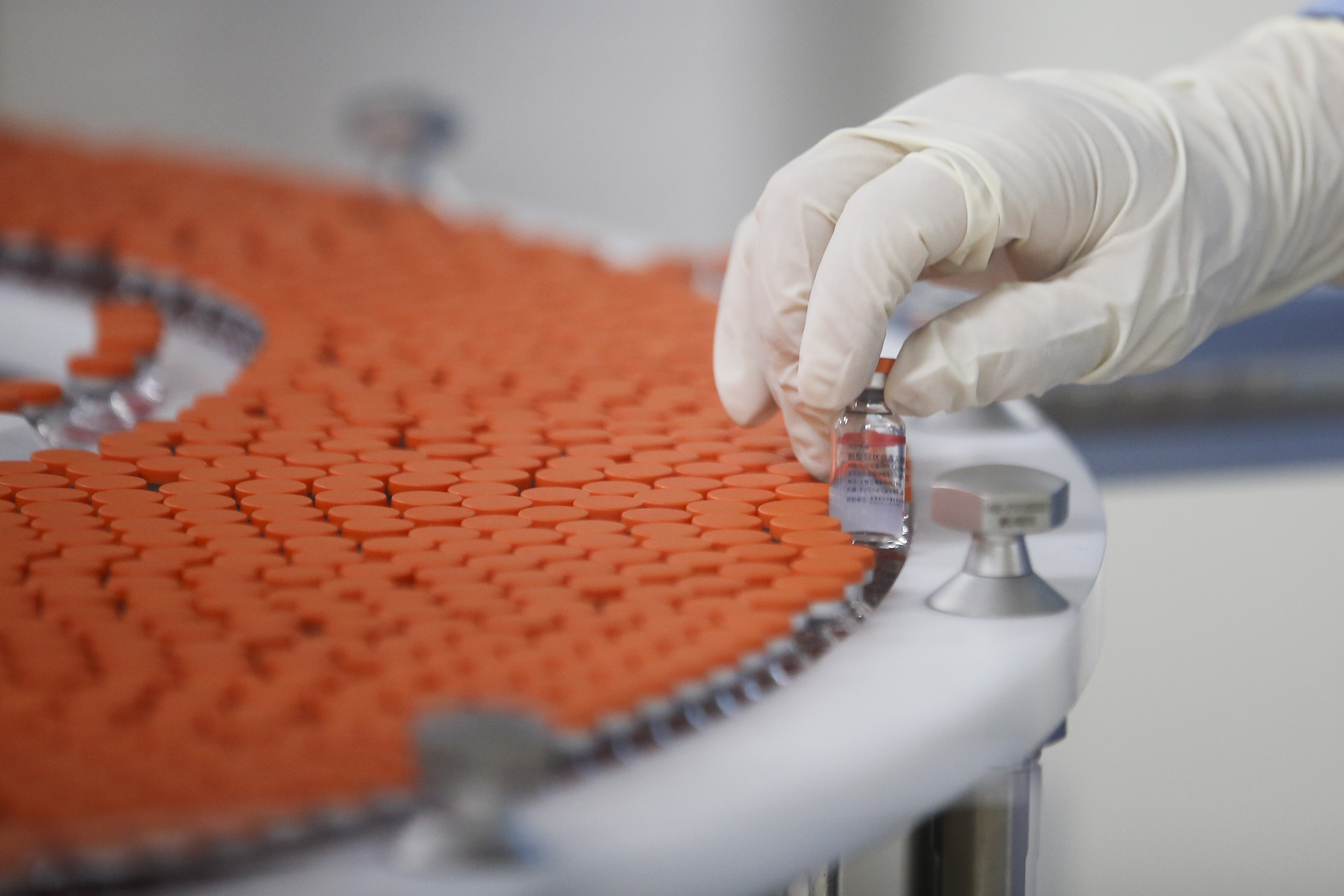 "I want to emphasize that I do not believe China intentionally did
this to harm the world," Nilsen added.

"China wanted the world to believe that their Herculean quarantining efforts contained the outbreak."

Nilsen also sounded the alarm over the state of the pandemic in the United States and claimed the deadly bug had been spreading throughout the country since 2019.

"The spreading in the USA is almost certainly already homogeneous, because it's been going on since last year without any containment whatsoever."

Writing during the early stages of the pandemic when Italy was struck down by the outbreak, Nilsen wrote: "I don't think Italy is ahead of us. I think we're ahead and by a large amount."

But Dr Fauci, the longtime head of the National Institute of Allergy and Infectious Diseases, did not read the early warning message.

China wanted the world to believe that their Herculean quarantining efforts contained the outbreak."

"Too long for me to read," Dr Fauci said in an email to his colleague Robert Eisinger.

The contents of some of the emails have led to renewed calls for Dr Fauci to be fired from Republicans like Sen Rand Paul and Rep Marjorie Taylor Greene.

The messages offer a glimpse into the confusing early days of the US Covid outbreak and Dr Fauci's dealings with the government, health officials, the media, celebrities and everyday Americans.

On January 31, 2020, more than two months before Covid was declared a pandemic, Fauci forwarded a copy of a Science magazine article called Mining Coronavirus Genomes for Clues to the Outbreak's Origins to US virus researcher Kristian Anderson and Sir Jeremy Farrar – who runs a global health charity in Britain.

"This just came out today. You may have seen it. If not, it is of interest to the current discussion," Dr Fauci wrote in an email with the article attached.

In his reply, Anderson noted that further analysis was needed to determine if the virus could have been engineered. 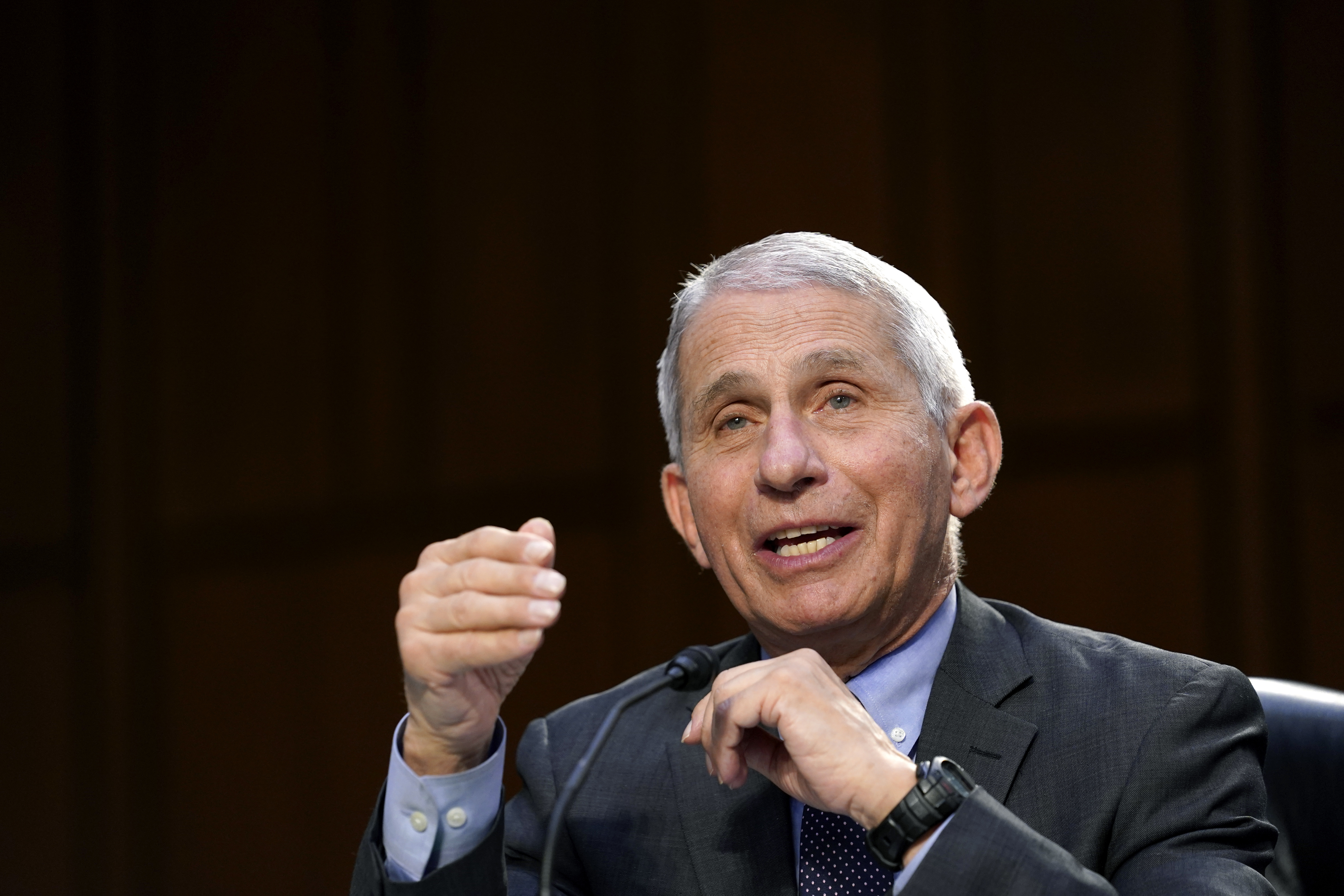 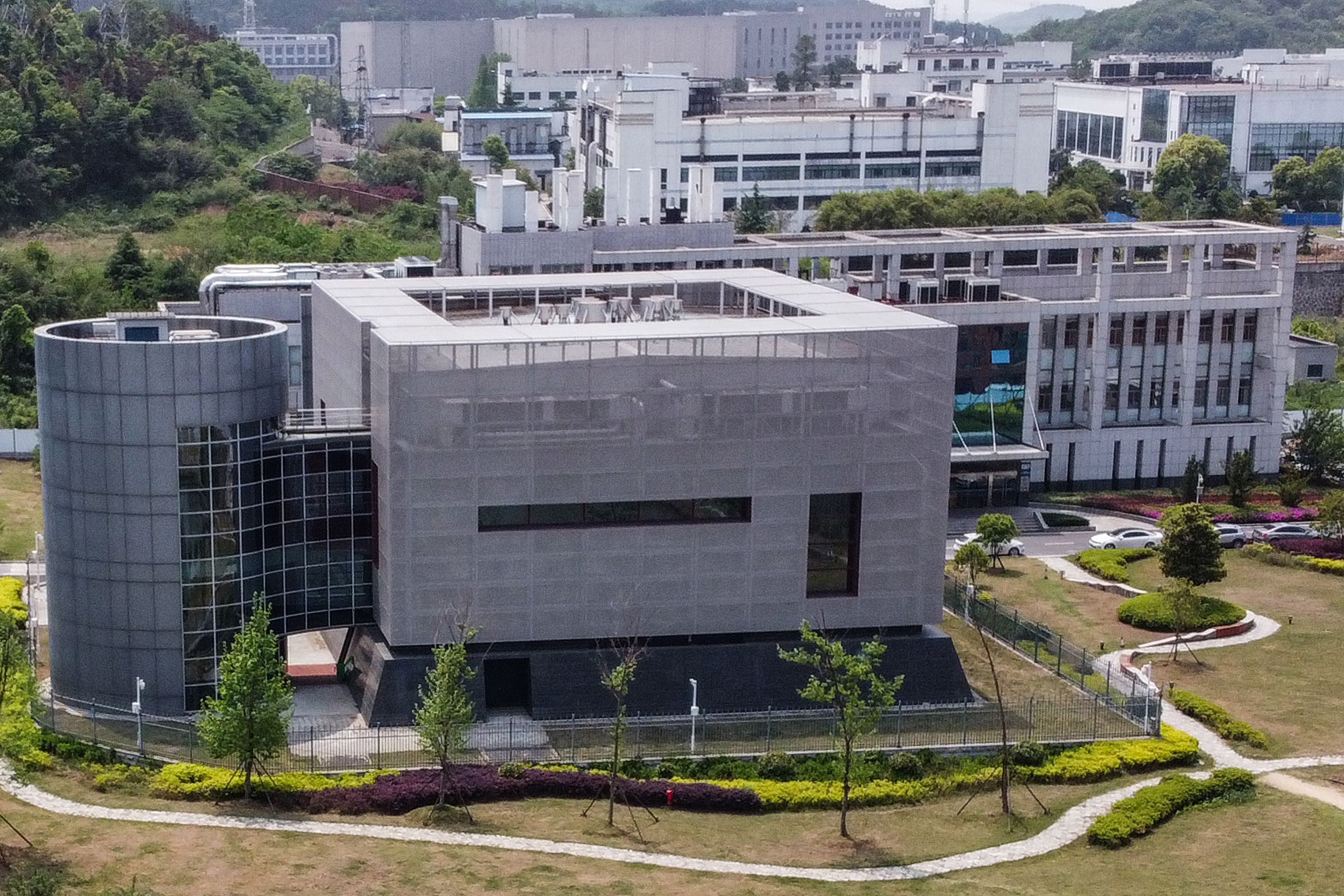 "The problem is that our phylogenetic analyses aren’t able to answer whether the sequences are unusual at individual residues, except if they are completely off," he wrote.

On April 16, 2020, Fauci received an email from Dr. Francis Collins, director of the National Institutes of Health, about the lab leak theory being discussed on Fox News' "Hannity" program.

Collins sent an email with the subject, "conspiracy gains momentum," but the contents of the email were blacked out.

Fauci responded to that email, but what he said was also blacked out.

Two days later, Fauci received a message from Peter Daszak, president of the EcoHealth Alliance, thanking him for publicly disputing the likeliness of the Wuhan lab leak theory.

"I just wanted to say a personal thank you on behalf of our staff and collaborators, for publicly standing up and stating that the scientific evidence supports a natural origin for Covid-19 from a bat-to human spillover, not a lab release from the Wuhan Institute of Virology," Daszak wrote.

The EcoHealth Alliance used its grant from the NIH to study coronaviruses in Chinese bats and sent the Wuhan lab nearly $600,000 over the course of five years, beginning in 2014.

After Covid was declared a pandemic last year, Dr Fauci publicly downplayed the possibility that the virus didn't develop naturally.

The doctor maintained the most likely origin was a transmission from animal to human in a Chinese "wet market".

However, Dr Fauci has changed his tune in recent weeks.

At an event last month, he said he was "not convinced" anymore that the virus evolved naturally.

"I think we should continue to investigate what went on in China until we continue to find out to the best of our ability what happened," he said.

"Certainly, the people who investigated it say it likely was the emergence from an animal reservoir that then infected individuals, but it could have been something else, and we need to find that out."