Outdoors in the pre-dawn hours around Bright in north-eastern Victoria, the temperature can plunge below zero.

Yet Rosie Spicer, a 62-year-old ex-smoker and now champion ultra triathlete, is often up at 3am to run or cycle the surrounding mountains and river flats. 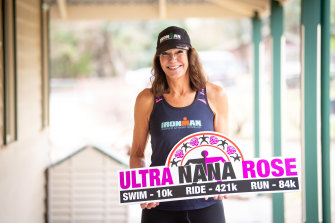 Ultra Nana Rose: Rose Spicer at her Porepunkah house with a sign made for her entry in the 2021 Noosa Ultraman in May.Credit:Eddie Jim

As the sun comes up, the colours of the verdant Buckland Valley and the fog wisps wrapped around Mt Buffalo can be breathtaking, but it can get frosty enough for icicles to form on her eyebrows.

Has she ever opted to stay in bed? Yes, she says, but only once a year. She reckons you must put in the hard yards today, so you can cross that finish line in good shape, with a smile. 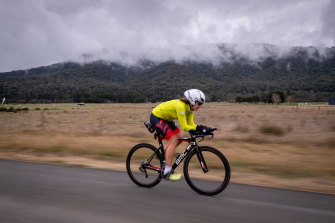 Powerhouse: ultra triathlete Rosie Spicer training in the Buckland Valley, where she once hit a wombat while riding her bike. Credit:Eddie Jim

Over three days, competitors swam 10km, cycled 421km and ran a double marathon, 84km. Ms Spicer completed it in 30 hours and 25 minutes, and was ecstatic because the feat had seemed "⁣so far fetched, so incredibly huge"⁣.

By her side was her partner, fellow fitness fanatic and mowing business owner Travis "⁣Trout"⁣ Wayth. 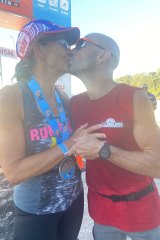 By your side: Rosie Spicer with her partner Travis ‘Trout’ Wayth after she finished the 2021 Noosa Ultraman.

“He always said, ‘You can do this Rose’. I think because he believed in me, it made me believe in myself.”

Life hasn’t always been rosy for Rosie. Trout was diagnosed with leukemia eight years ago but she says he “hasn’t let it beat him” — since diagnosis he’s competed in eight ultramans and 20 ironmans.

Then there was the time she hit a wombat and nearly died. On a pre-dawn cycle on the Buckland Valley Highway in March 2010, she struck the marsupial as it crossed the road. She suffered a head injury, torn shoulder ligaments, a punctured lung and cracked ribs and was told she would never run or cycle again.

On return to Porepunkah, Trout and some of her friends took Ms Spicer for walks, to the pool, and helped her get back on a bicycle.

In February 2011, she returned to competition — a half Ironman in Canberra. She has now finished 55 ironmans or half ironmans, but just one Ultraman. She "⁣won’t say no"⁣ to another but in the meantime is training for an ironman in Port Macquarie in September.

Until 2003 Ms Spicer was a pack-a-day smoker, but was shocked into quitting by the early deaths of her parents, both heavy smokers, at age 70 and 62. 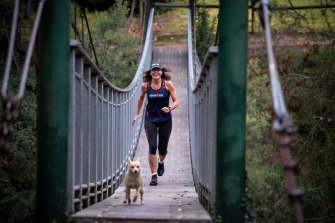 Good day for a run: Rosie Spicer braves the cold to train in Porepunkah with her dog, Noah.Credit:Eddie Jim

Ms Spicer’s twin granddaughters had just been born, and she wanted to see them grow up. She works as an activities co-ordinator at an aged care home, and wanted to be like one client who lived to 103, who made the most of life. Fearing weight gain, she started running around her yard.

Trout was an ironman competitor and urged Rosie to try one. She couldn’t swim — and had to work on a fear of sharks and of drowning from exhaustion — and hadn’t ridden a bicycle since childhood.

But she enjoyed setting gradual challenges, until in Noosa last month, she found herself running two marathons in one day. "⁣Yeah, I know, crazy, huh? Anyone reading it would think it’s nuts."⁣

For others stuck in an unhealthy rut, she says "⁣it’s never too late"⁣ to change. She advises enlisting a friend share the dream with. Then you must act. "⁣Once you’ve opened your mouth and you tell someone you’re going to do something, you’ve got to walk the walk."⁣