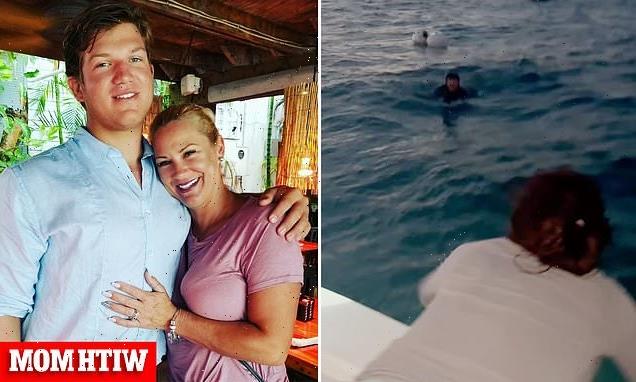 Incredible moment family find free diver, 21, lost in the Gulf of Mexico off Florida – after he swam TWO MILES to a reef and made floats out of buoys

A 22-year-old man was rescued after being swept away by the Gulf Stream while free diving more than 5 miles from the Florida Keys.

Diver and spear fisherman Dylan Gartenmayer was with two friends when he descended for a final dive of the day around the West Sambo Reef last Thursday.

To his friends’ shock he failed surface, so they notified the US Coast Guard and his family.

Nearly four hours after he was last seen and after being transported miles through the ocean, he was found clinging on to two buoys he had cut from the reef.

Gartenmayer, who was raised in the Keys, has more than a decade of experience free diving and spear fishing. ‘As natives of Key West, we love the ocean. I was spearfishing with Dylan in my belly,’ his mother Tabitha told NBC6. 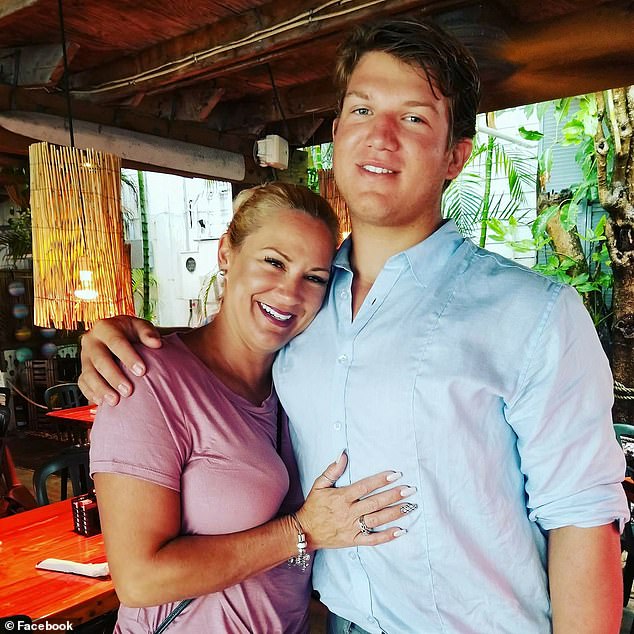 On January 19 as he and two friends were getting ready to wind down for the day as the water conditions were worsening,  he went for one last dive.

During that dive he was at a depth of about 35 feet when suddenly currents swept him out to depths of 150 feet – keeping him submerged for around two minutes.

‘I do a lot of deep free diving, so I like to go over 100 plus feet on a single breath,’ Gartenmayer said.

His friends waiting on the boat became concerned when he never came back up. ‘They were mainly looking down, thinking I blacked out from a lack of oxygen,’ he said.

They then contacted the Coast Guard and notified his family to initiate a search operation, sharing with everyone the coordinates of where he had gone for the last dive.

‘Friend diving went diving and is missing in this area by Western Sambo Reef at these coordinates coast guard now searching if anyone has a fast boat and can help look before the sun goes down,’ wrote his friend Sean Caggiano.

That was at 6.03pm – the time to the nearest minute that the sun was due to set that day. 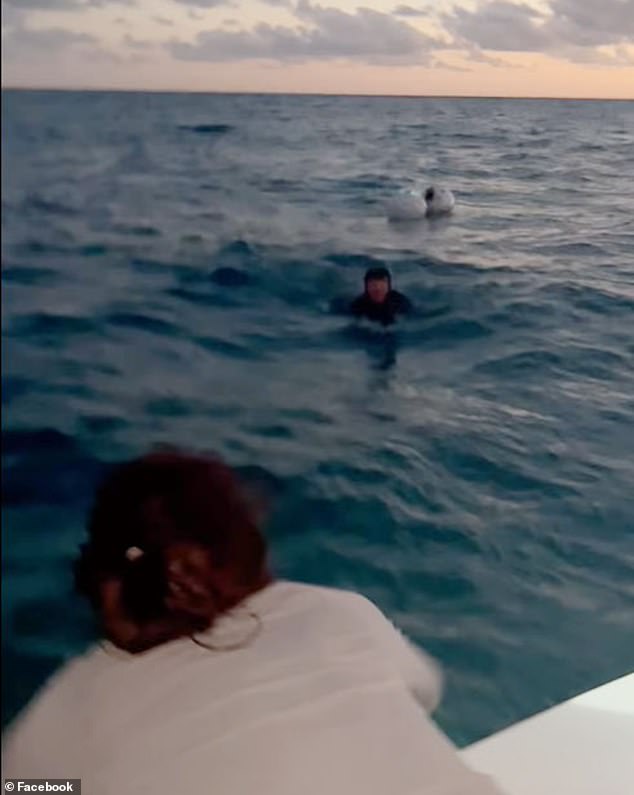 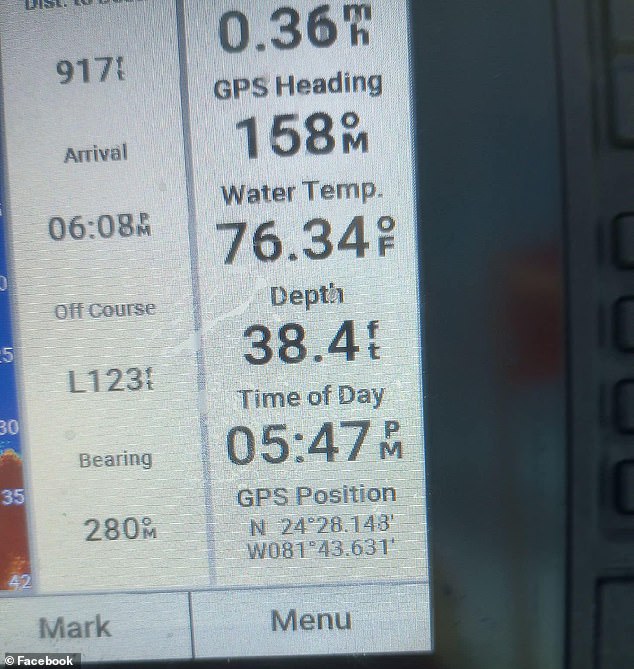 Once they realized he was missing his friends contacted the Coast Guard, his family and shared coordinates of where he had gone for the last dive

His family went out in his grandfather’s boat to search for him. They described the miraculous moment that just minutes after arriving at the reef one of his friends on the boat spotted something strange – two buoys had been tied together.

As they approached they saw him at the surface, just 0.3 miles from where he had descended, and four hours later. At 6.37pm Caggiano posted an update that his friend had been found.

The moment he was seen was captured on video and showed family members and friends cheering as Gartenmayer used his spear gun to paddle towards their boat.

Once on board he was transferred onto a coast guard boat and taken to coast. Although his temperature was low at first he was released just an hour later.

Once rescued he gave an account of what happened. He says after being dragged by the currents he surfaced about a mile away from where he went in.

‘There was a bunch of bait blowing up around me. I knew that there were big fish eating that bait. I was ready to fight the night out but I’m glad I didn’t have to,’ Gartenmayer told NBC6.

Once he came up he then swam about a mile to a channel marker while holding onto a piece of bamboo. 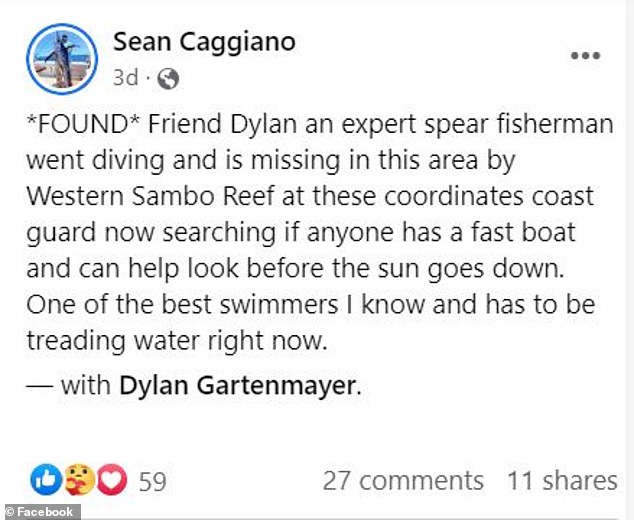 At 6.37pm – half an hour after sunset – Caggiano posted an update that his friend had been found 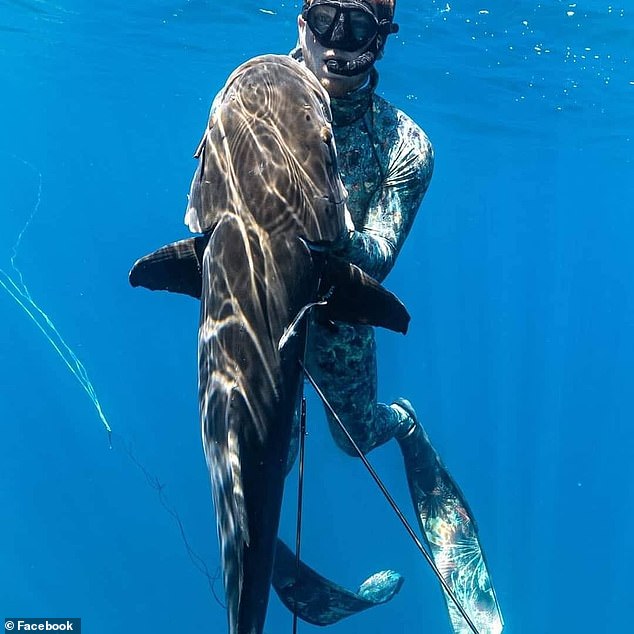 Gartenmayer, who was raised in the Keys, has more than a decade of experience free diving and spear fishing 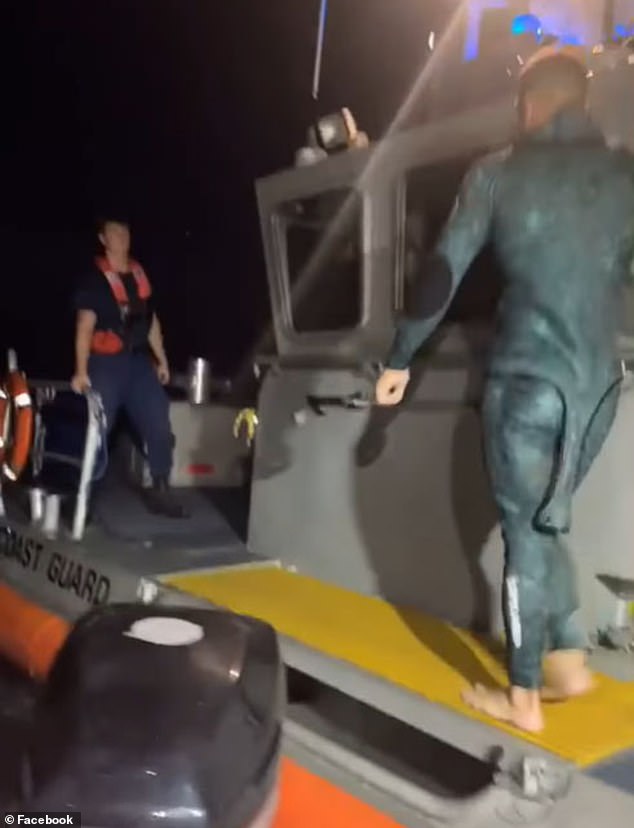 Once on board he was transferred onto a coast guard boat and taken to coast. Although his temperature was low at first he was released just an hour later

At that point he could see a helicopter searching and the blue lights of a coast guard vessel but the distraction caused him to loose the bamboo that was keeping him afloat.

‘I could see coast guard out in the distance to the west of me. I could see their blue lights, the helicopter going, doing their grid pattern,’ he said.

Without the bamboo he cut buoys from the reef and used them to keep him afloat. ‘I ended up cutting three of those from reef, tying up a little hammock,’ he said.

He described how he could heart the humming sound of the boat’s engine. ‘My mom took my dive gear. She just started hugging, crying,’ said Gartenmayer.

His cousin, Priscilla Gartenmayer, recorded key moments in the rescue mission, and uploaded videos to social media causing the story to go viral.

‘He’s is the smartest most experienced diver I know on the water , he swam about two miles and before he lost his energy he grabbed 3 buoys and made a hammock for him self to float on,’ she wrote.

‘It’s a miracle we landed right on my son in a needle in a haystack. You’re in the middle of the ocean, and that’s god,’ said his mother Tabby.