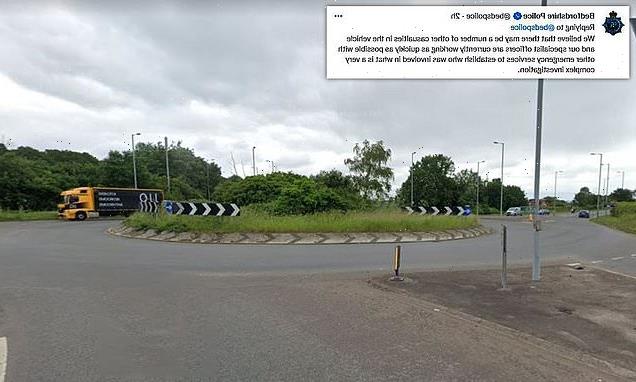 Four people were killed when a car crashed into a field in Bedfordshire and caught fire, police reveal after combing the wreckage to identify the victims

Four people died when a car crashed into a field and caught fire, with police and firefighters working to retrieve the victim’s bodies in a ‘highly complex’ process.

Bedfordshire Police was called at around 3.40am on Sunday to reports of a serious single-vehicle crash near the Flying Fox roundabout on the A5.

One man and three others died in the crash that emergency services attended near Heath and Reach, Bedfordshire.

Police said officers were working hard at the scene with firefighters to recover those who died as well as the car as part of their investigation. 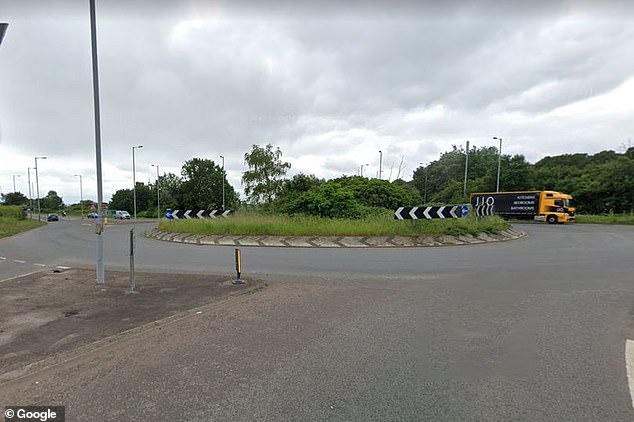 A man and three other people were killed when a car crashed into a field near near the Flying Fox roundabout (pictured) on the A5 in Bedfordshire. Road closures from Hockliffe to Great Brickhill are expected to last for some time

A spokesman said the ‘highly complex work’ would take place for a third day on Tuesday.

Acting Sergeant David Burstow, from the Bedfordshire Serious Collision Investigation Unit, said: ‘We are doing our work in a dignified and meticulous manner in order to establish what happened in this tragic, awful incident.

‘We believe there were four people in the car who sadly died in the collision.

‘Specially trained officers are speaking to their families and are offering them support, while forensic identification is still to take place.

Police officers and firefighters attended the site of the crash. Police said they were trying to find out what happened and appealed for information from the public

‘While we believe no other vehicles were involved, our investigations are ongoing into the circumstances surrounding the incident.

‘At this point we are keen to reiterate the requests of the families involved not to speculate on social media, but I would appreciate any information from witnesses or anyone else who may be able to assist us with our enquiries.

‘We would be particularly interested to hear from anyone with dash-cam or CCTV footage which could help with our enquiries.’

Police asked anyone with any information to contact Bedfordshire Police via Bedfordshire.police.uk/report or call 101, quoting Operation Loddon. This included an option to submit any dash-cam footage online.

Road closures remain in place from Hockliffe to Great Brickhill and are expected to last for some time.

No formal identification has taken place.