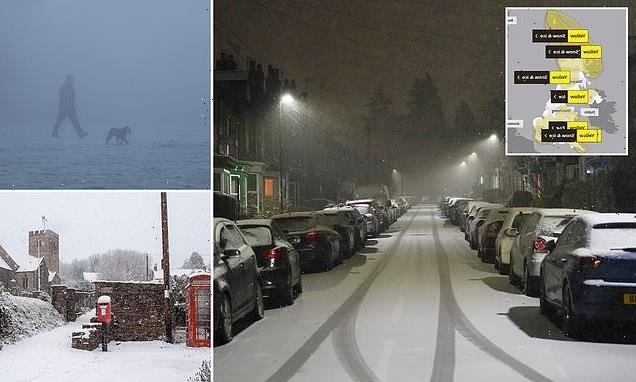 The Met Office has issued a freezing fog warning this morning as Britain faces a fortnight of snow and ice chaos in the run-up to Christmas with temperature lows of -12C (10F) are forecast tonight – making Britain colder than Iceland.

Up to four inches of snow is expected to fall, with flurries across the country through the week. There are due to be daytime highs of just 1C (34F) to 3C (37F) for many, and nights plunging as cold as -12C in England and -15C (5F) in Scotland.

This morning the national forecaster issued an urgent fog warning until 11am which could create slippery surfaces this morning.

The yellow alert covers south and central England, with London, the southeast, the southwest, and the Midlands told to prepare for poor visibility of just 50m in some places.

There are also Met Office yellow warnings for snow and ice in place for much of Scotland, as well as parts of Wales and south-western England until 12pm today.

The two warnings will kick in today – one for the north of Scotland for 24 hours from 12pm and another for most of London and some of south-east England covering 6pm on Sunday to 9am on Monday.

Ellie Wilson, Met Office meteorologist, said: ‘It’s looking to stay quite chilly through next week with frost overnight and some cold temperatures in the day as well.

‘Through Sunday morning, most wintry showers are going to be focused on northern parts of the UK – so Scotland – and the south west of England,’ she said. 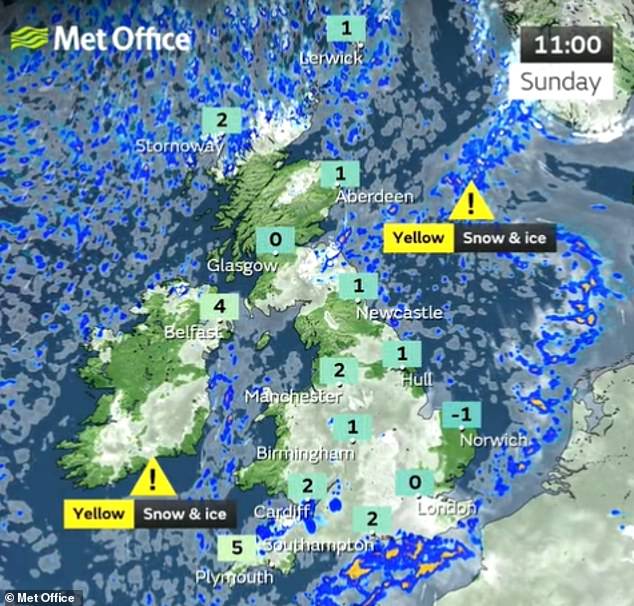 A Met Office yellow warning for snow and ice is in place for much of Scotland, as well as parts of Wales and south-western England until 12pm on Sunday. Two more snow and ice warnings will kick in on Sunday – one for the north of Scotland for 24 hours from 12pm and another for most of London and some of south-east England covering 6pm on Sunday to 9am on Monday 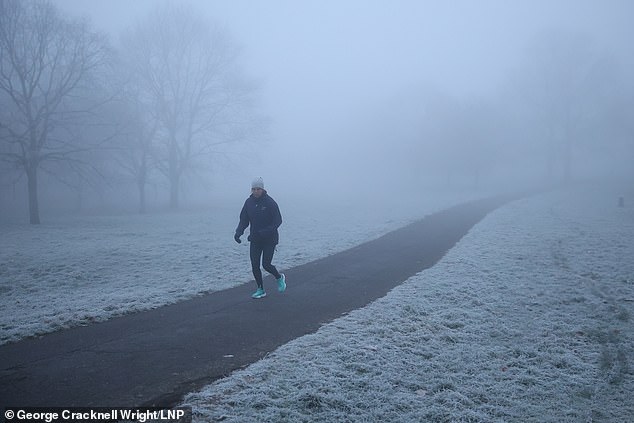 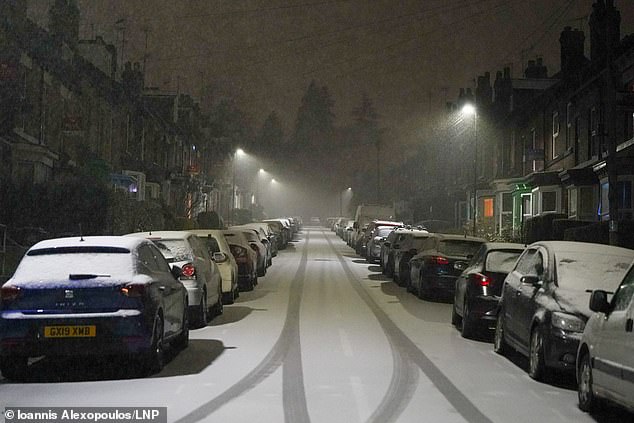 Up to four inches of snow is expected to fall, with flurries across the country through the week. Pictured, snow covers a street in Sheffield on Sunday morning 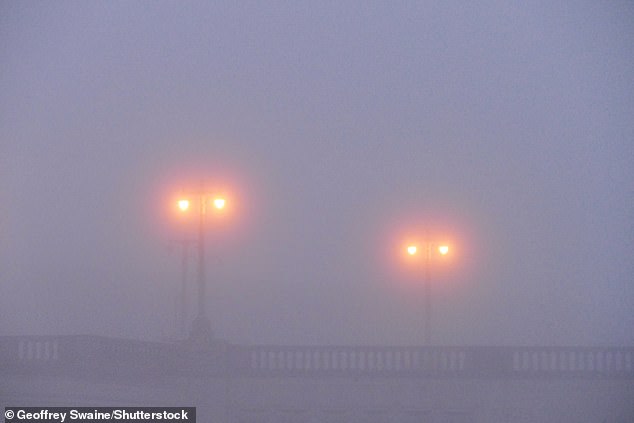 The Met Office has issued a freezing fog warning this morning as Britain faces a fortnight of snow and ice chaos. Pictured, fog along the riverside in Caversham, Reading on Sunday 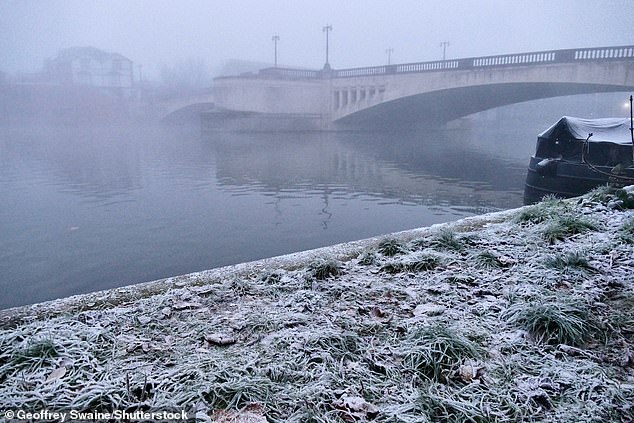 A foggy Thames riverbank in Caversham, Reading on Sunday morning 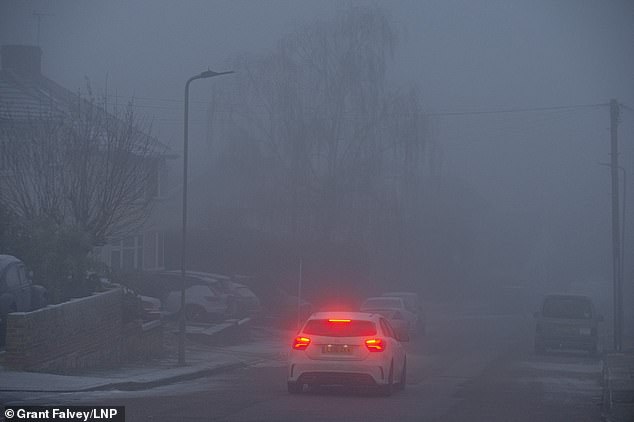 Brits have been told to prepare for poor visibility of just 50m in some places. Pictured, freezing fog this morning in Orpington in South East London

‘Through Sunday and into Monday, there’s a chance the south east of England could see a little bit more in the way of snow although there’s a little bit of uncertainty there.

‘There could also possibly be the odd flurry in the south Midlands – the Bristol/Bath area – but anything settling will likely be above 200-300 metres.’

Ms Wilson also said temperatures will continue to plummet, with parts of the UK widely seeing below-freezing on Saturday and Sunday night.

During the day today, some areas will see temperatures just above freezing or dropping below it, while the east of England can expect freezing fog.

The forecaster also said the risk of ice over the next couple of days will be highest in coastal areas where showers fall as rain and then freeze.

On how long the cold snap will last, Ms Wilson said: ‘We’re expecting it to last at least through next week.

‘There’s a chance that temperatures could fluctuate a little bit but we’re not expecting them to become much milder than we’ve seen recently with overnight frost expected until at least next Friday, even into the weekend.’

Northern England and Scotland are due a worse-than-normal 25 to 30 more days of snow or ice travel disruption this winter, with 20 to 25 days of impact in the South, said The Weather Company, the world’s biggest commercial forecaster.

A freeze for up to ten days ahead is expected for the whole country, with the North at risk for up to 15 days.

Leon Brown, head of meteorological operations at The Weather Company’s Weather Channel arm, said: ‘More snow and ice than average are expected this winter because of the cold Arctic pattern setting up so early in December. Northern England and Scotland are forecast 25 to 30 further days with snow or ice causing disruption.

‘Cold polar air is covering the entire country already, and the South is far more at risk of snow as it will be the battleground for moist milder air returning, which can see snow.

That’s as cold as the world’s most northerly town, Longyearbyen, 500 miles from the North Pole. 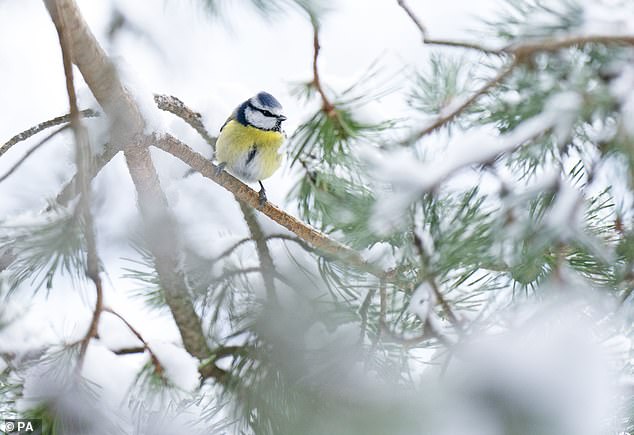 Northern England and Scotland are due a worse-than-normal 25 to 30 more days of snow or ice travel disruption this winter, with 20 to 25 days of impact in the South. Pictured: A blue tit surrounded by snow in the Cairngorms National Park near Aviemore on Saturday 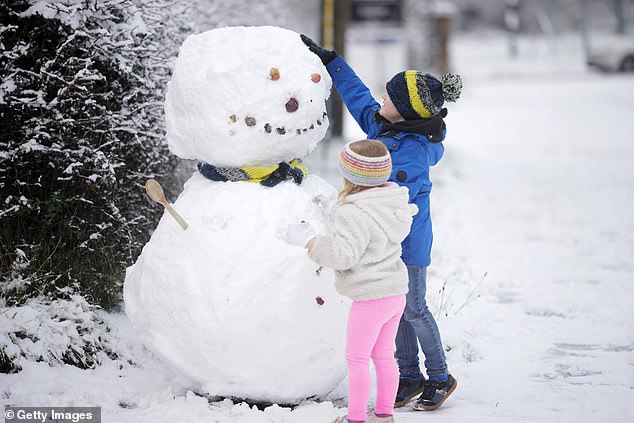 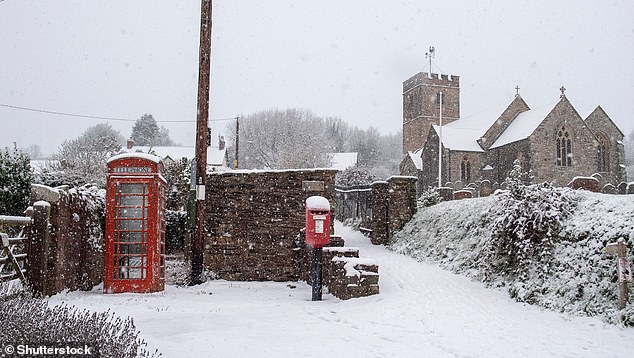 Britain is facing a fortnight of snow and ice mayhem in the run-up to Christmas, as temperature lows of -12C (10F) are forecast tonight – as cold as the North Pole. Pictured: Snow falling at St Mary’s Church in the village of Brompton Regis on Saturday

Today, a snow and ice warning begins at 9am for most of London and some of the South East for 24 hours, with a 30 per cent chance of up to 5cm of snow.

Schools were closed in parts of Scotland at the end of last week, and the same could happen in England and Wales this week.

The Met Office also warns that the cold spell could last well into January. Met Office forecaster Steve Willington said: ‘It is staying cold, with daytime temperatures only a few degrees above freezing in many places and overnight temperatures dropping to -10C [14F] or lower in isolated spots.’

This is Britain’s worst cold spell since 2018’s Beast from the East.

Night temperatures are the coldest since a shorter cold period in February last year, which saw -23C (-9F), in Braemar, Aberdeenshire, the UK’s coldest temperature since 1995.

Saturday morning saw a low of -8.6C (17F) near Bournemouth, Dorset. And the cold snap could last for 30 days – well beyond the festive period. 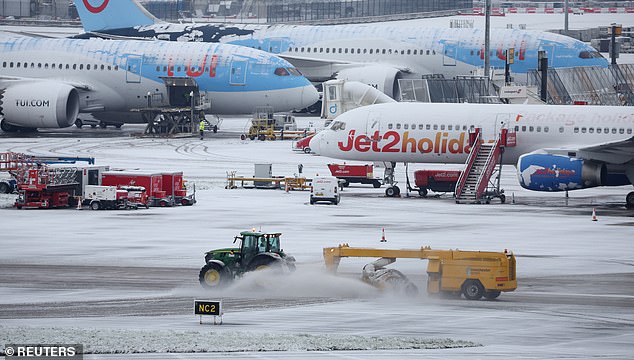 Heathrow, which saw 50,000 passengers stranded when 400 flights were cancelled in December 2017, put 500 snow-clearing staff and 185 snow ploughs on duty. Gatwick has 186 staff and 98 snow ploughs and blowers ready.

The icy conditions caused road accidents across the North West on the M58, M62 and M61 on Saturday, police said. Travel disruption across the UK is feared on Monday morning as commuters navigate icy roads. Some 30,000 UK breakdowns are predicted, the highest for a year.

But it isn’t all bad news. Children were out building snowmen, dog walkers enjoyed strolling in frosty woodlands and landscapes across the country were transformed into snowy Christmas scenes.

Families are now facing landmark £100-a-week energy bills, having been forced to turn up the heating since the mercury first dropped last Monday.

Some £2.8 billion is due to be spent this week on energy bills across Britain’s 28 million households as winter bites – close to double the amount paid in cold weeks last winter. 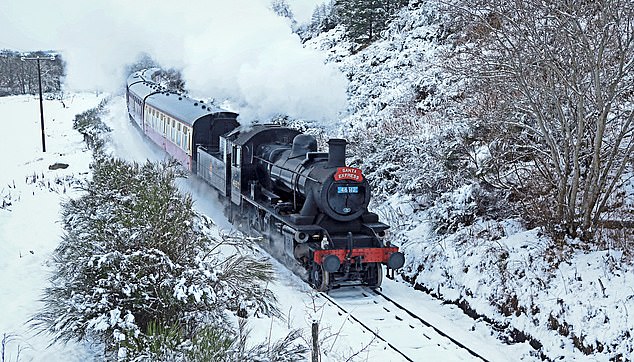 The risk of blackouts increases in cold snaps as demand from the National Grid rises, and the chances of damage to power lines increase.

People without central heating use electricity to heat their homes. And, generally, families spend more time at home, making greater use of TVs and other gadgets, kitchen appliances and lighting.

Those with gas will see their boilers under extra pressure as they heat mains water from near freezing. Boilers must also be on longer to keep homes warm. Heavy use means they are more likely to break down and pipes are at risk of freezing and bursting.

The agency is advising people to look out for friends and family who are vulnerable in the cold and to ensure they have access to warm food and drinks, adding that people should maintain indoor temperatures of at least 18C (64.4F).

Dr Agostinho Sousa, consultant in public health medicine at UKHSA, said: ‘Cold weather can have serious consequences for health, and older people and those with heart or lung conditions can be particularly at risk.

‘If you have a pre-existing medical condition, you should heat your home to a temperature that is comfortable for you.

‘In rooms you mostly use such as the living room or bedroom, try to heat them to at least 18C if you can. Keep your bedroom windows closed at night. Wearing several layers of clothing will keep you warmer than one thicker layer.’ 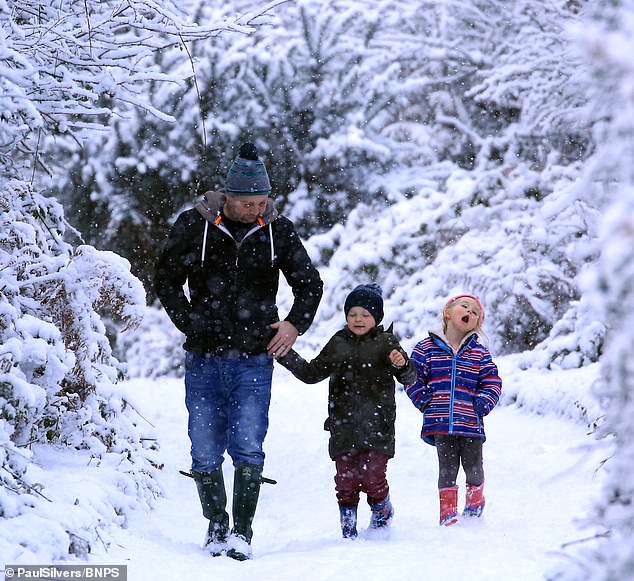 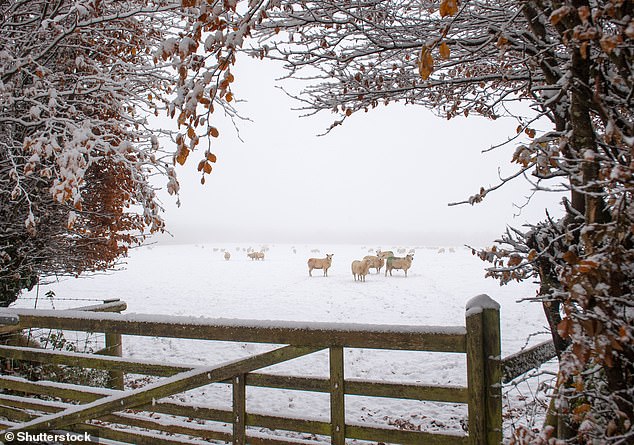 Additionally, the Met Office said the conditions could lead to more travel disruption, especially on Monday morning, and a small chance of some rural communities becoming cut off along with a possibility of power cuts and mobile phone coverage being affected.

He said: ‘National Highways is committed to treating every road which needs to be treated – whenever it is needed.’

Winter in Britain will be so cold that grit will not work. The Government, the AA and councils say road salt is much less effective at -5C (23F).

Typically, every 10C drop causes pressure to fall by two pounds per square inch (PSI). If tyres were last checked in the autumn when it was 25C (77F), and it falls to -5C (23F), that is a 6 PSI difference. That would use up to five per cent more fuel.