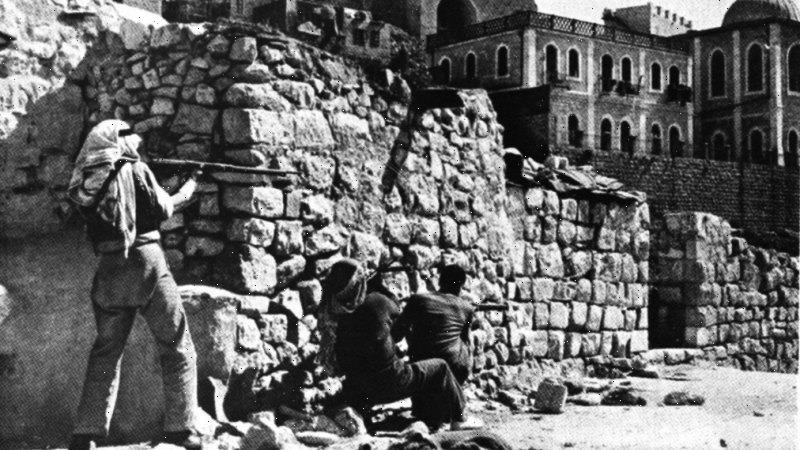 A dispatch from the Associated Press correspondent in the Old City of Jerusalem said King Abdullah’s Desert Legion marched into the Old City on Tuesday afternoon and appeared to wrest Jerusalem from the Jews, “whose strategic outlook seems hopeless.” 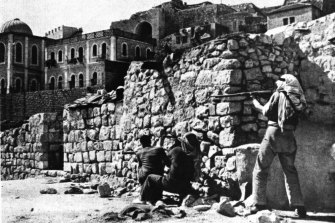 The Arab Legion attacking the Jewish Quarter of Jerusalem.

The correspondent reported that the Jewish grip on Jerusalem is being broken by the Transjordan Arab Legion’s guns.

Haganah positions in the Jewish quarter of the Old City and on the slopes of Montefiore have been under heavy, accurate howitzer fire.

A Trans-Jordan Defence Ministry communique stated that Arab Legion forces moved up to the norther side of Jerusalem and placed artillery in a dominating position.

Reuters’ correspondent says the Arab Legion advanced into the Old City because Arab irregulars there were running out of ammunition.

Earlier the correspondent said the nearest Arab Legion units to Jerusalem were last known to be at Kalandia airport, five miles north of the city. 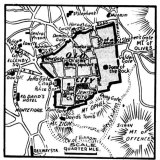 Map published in The Age on May 20, 1948, shows the Old City. The battle is particularly fierce in the Jewish quarter.Credit:The Age Archives

The Legionnaires marched over the cobblestones of the “Way of Sorrow” past the Church of the Holy Sepulchre.

A Haganah communique announced that Jewish forces broke into the Old City of Jerusalem.

In fierce midnight fighting they linked up with Jewish troops which were isolated there, and widened their bridgehead during all night fighting.

Hand-to-hand fighting is raging in the city.

The American Associated Press correspondent within the Old City says Arab Legion howitzers heavily and accurately pounded Haganah positions in the Jewish quarter and on the slopes of Montefiore from mid-afternoon to dusk.

Reuters’ correspondent pointed out that outside the walls of the Old City the rest of Jerusalem is held by a combined force of many thousands of Haganah, Irgun and Stern Gang fighters, who are themselves cut off from contact with the main Jewish forces, estimated at 50,000 which are on the coastal plain around Tel Aviv.

The correspondent of the “Times” summing up the military situation in Palestine says there is no appreciable change but for the Jewish capture of Acre.

Neither side has done more than consolidate itself in territory within its natural area.

In other words, both appear to be commanded by very cautious men who have thus far belied expectations of adherents who looked forward to rapid action.

“But,” adds the correspondent, “the country is very small and, above all, very narrow from east to west, so that a major encounter could be brought about by Arab League forces between the first light and dawn.”

The correspondent points out that with the exception of Haifa and its surroundings, held by British forces, Jews are now established all along the Palestine coast from the Lebanese frontier to some distance south of Jaffa.

The capture of Acre represents a serious rebuff to the Arabs.

Acre for weeks had been festering with typhoid. The odor of death and accumulated filth hung over the city when the white flag went up, and Haganah men warily entered it.

It is estimated 4000 Arabs remain in the city.

The American Associated Press correspondent at Tel Aviv says a dive bomber made dives over the centre of Tel Aviv, each time releasing fragmentation bombs at low altitude.

A bus station building was smashed open, the area in front of it being strewn with dead, including women and children.

Another plane attacked a district just outside of Tel Aviv.

Tel Aviv authorities stated that 41 persons were killed and 60 wounded in the dive-bomber attack.

The America Associated Press correspondent in Jerusalem says raiders yesterday, under nearly a full moon, were over Tel Aviv for the first time at night, and kept the city alerted until after midnight.

The raiders were apparently striking at an outlying area.

A Haganah report claimed Jewish forces captured the former British military camp at Sarafand, between Lydda and Tel Aviv, and put the Arabs to flight.