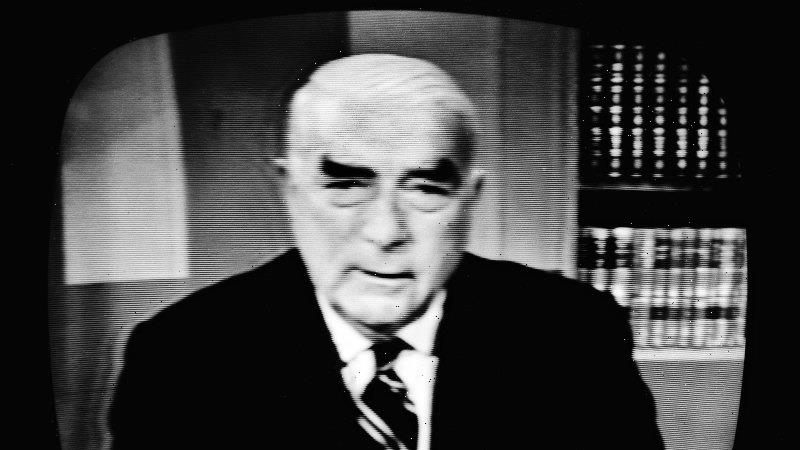 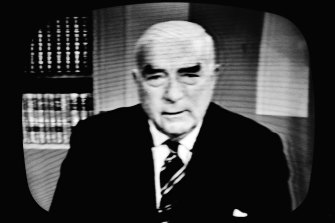 THE Prime Minister (Sir Robert Menzies) made history last night when, for the first time in Australia, he relied on television to carry his policy speech to the national electorate.

Sir Robert is pictured above jokingly applauding himself during the telecast which he watched with members of his family from his suite in the Hotel Windsor. 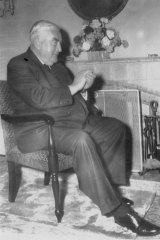 The Prime Minister, Sir Robert Menzies, jokingly applauding himself while watching his own policy speech on television. Credit:The Age Archives

The Leader of the Labor party, Mr. Calwell, combined the old-fashioned hustings speech with a telecast, which was later repeated throughout the country.

The Prime Minister preferred to pre-record his speech before 250 selected friends, and have it telecast simultaneously on all channels throughout Australia, and on radio.

Sir Robert was clearly aiming at the friendly, intimate approach. He wanted it to appear that he was in your living room, reasoning with you.

He and his staff, with the help of television technicians, worked deliberately towards this end, sparing no detail.

An early decision was that the Prime Minister should use no make-up. He believes, according to his staff, that heavy make-up smooths out the expression lines in the face, leaving it blank and without personality.

Relying heavily on personality, as he does, he determined to avoid this error, even though it meant a problem for the camera men.

Without make-up, faces are normally pallid under the battery of lights, and minor blemishes, even the roots of a freshly shaven beard, are apt to show. The television camera is terribly revealing.

The technicians dealt with this by dispensing with the usual battery of powerful lights focused on the victim’s face, and using instead what is known as “broad lighting” – a bright but uniform light throughout the studio.

This was on the whole effective, though it left much to be desired in the black-and-white contrasts on the screen.

The Prime Minister, according to a member of his staff, has had no special training in television presentation. “He comes to it in a mood of natural innocence,” it was said.

A picked audience of friends assured him of a sympathetic audience, but for some listeners it might have implied that he was talking only to friends, and not to the nation. It could have suggested exclusiveness.

His timing was excellent. With 40 minutes at his disposal, he spoke for 39 minutes two seconds, in spite of a fair number of impromptu asides.

He met his time limit at the expense of throwing away 1200 words of his prepared speech.

He is said to be very pleased with his new technique, and to take pride in having pioneered new electioneering methods at the age of 68.