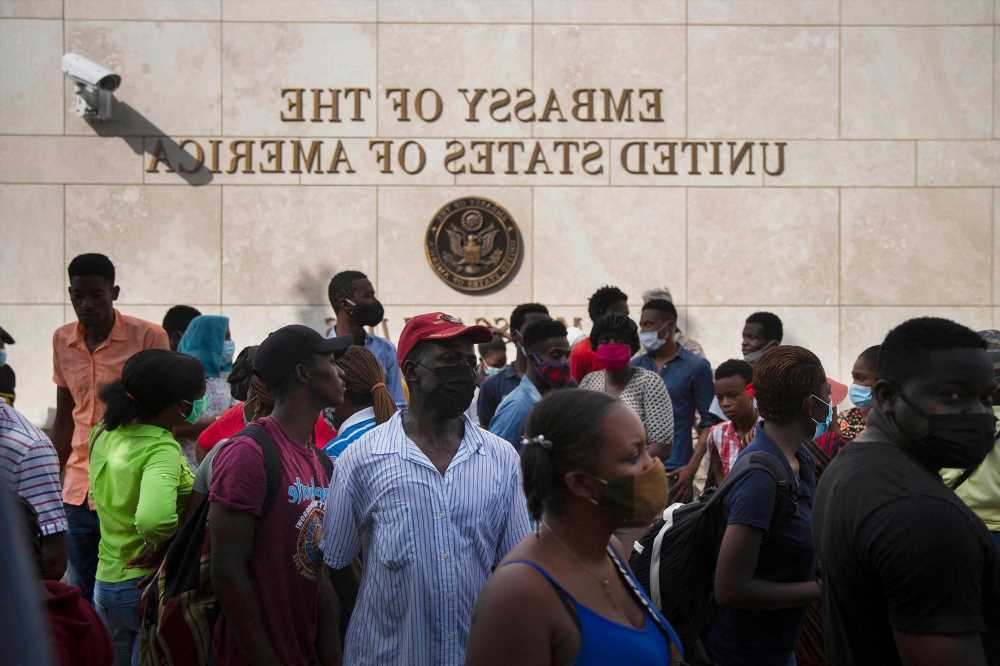 Yet another politician claims power in Haiti after president’s assassination

Haiti pleads with US to send troops amid ‘shadow of violence’

Haiti ‘hit-squad members’ say attack was planned for a month

One of Haiti’s most notorious gang bosses has condemned the assassination of President Jovenel Moïse — a reputed ally — as “cowardly and villainous,” while threatening “war” against those who would exploit the power vacuum in the impoverished Caribbean nation.

“No one wanted this tragic outcome that will worsen the crisis and amplify political instability,” said Jimmy “Barbecue” Cherizier during a Saturday press conference.

A former cop turned head of a gang coalition known as G9 Family and Allies, Cherizier is widely believed to have been aligned with the late Moïse and his right-wing party.

In a daring, dead-of-night raid last week, a heavily-armed squad of killers fatally gunned down the 53-year-old president and critically wounded First Lady Martine Moïse, 47, inside their home overlooking the capital city of Port-au-Prince.

Haitian officials have described the perpetrators — who claimed to be agents of the US Drug Enforcement Administration — as well-trained “foreign mercenaries,” with two suspects arrested in the assassination identified as Haitian-Americans.

Cherizier called the killing “cowardly and villainous,” while claiming that Haiti is being held “hostage” by enemies he did not identify by name.

“They reign supreme everywhere, distribute weapons to the populous quarters, playing the division card to establish their domination,” he said.

The gang boss went on to rail against the “bourgeois” and “exploiters,” threatening violent resistance.

“We will use our weapons against them in favor of the Haitian people,” he said. “We’re ready for war!

“We invite all those who are trying to take advantage of this coup to think carefully, to consider whether they have in their hands the appropriate solution to the country’s problems,” he continued in a thinly-veiled threat. “We are just now warming up.”

G9 is one of at least 30 gangs warring for control of nearly half of Port-au-Prince, with others bearing monikers ranging from “5 Seconds” — for the amount of time it allegedly takes them to commit a crime — to “400 Mawozo,” which roughly translates to “400 lame men.”

The gangs have long been bankrolled by some of Haiti’s most powerful politicians and their allies.

But it’s feared that the politicians’ battle for control since Moïse’s assassination — which has seen several men stake a claim to the presidency ahead of a September election — will fuel increased violence in streets that have already run red in recent months.

“The country is transformed into a vast desert where wild animals engulf us,” said the Haitian Conference of the Religious in a recent statement decrying the surge in violent crime. “We are refugees and exiles in our own country.”

Gangs recently ransacked and burned homes in Port-au-Prince, while pilfering tens of thousands of bags of sugar, rice and flour — precious commodities in the poorest nation in the Americas.

The violence has driven thousands of civilians to seek shelter at churches, outdoor fields and a large gymnasium, where the government and international donors have struggled to keep up with demands for food and long-term housing.

The refugees include dozens of disabled people who were forced to flee last month when gangs set fire to the encampment they’d called home since being injured in the catastrophic 2010 earthquake that rocked the nation.

“I was running for my life in the camp on these crutches,” said Obas Woylky, 44, who lost a leg in the quake. “Bullets were flying from different directions. … All I was able to see was fire in the homes.”

When gangs aren’t actively stealing supplies, the ever-present threat of violence has ground commerce to a near-halt in such spots as Martissant, a community in Port-au-Prince whose main road links the capital to southern Haiti.

Drivers’ fear of being caught in a crossfire or worse has practically frozen shipping through the area, driving up prices, delaying the transportation of food and fuel, and forcing international organizations to scrap aid programs, according to a report by the U.N.’s Office for the Coordination of Humanitarian Affairs issued earlier this month, before the assassination.

“Newly displaced people seek refuge in shelters every day,” the agency found, noting that more than 1 million people are in need of immediate humanitarian aid and protection. “Escalating violence on an almost daily basis is expected to last for some time.”

With gang life in Haiti so deeply interwoven with politics, there are fears that violence may flare up close to the elections — a possibility that Mathias Pierre, the country’s elections minister, said cannot be allowed.

“We need to organize elections,” he said. “They need to back off.”

On Sunday, the US dispatched a technical team to Haiti to assess how America can best help the nation, Reuters reported, citing a senior US official the outlet did not identify by name.

Upon their return, the team will brief President Biden, who will “then make decisions about the way forward,” the source said.

It was not immediately clear which US departments were sending representatives to Haiti, or how long the trip would last.

Meanwhile, the sister of one of the alleged assassins — a former Colombian soldier killed in a gun battle with Haitian police — vowed to clear her brother’s name, insisting that he was only hired to work security.

“There is something that doesn’t add up,” Jenny Carolina Capador, sister of Duberney Capador, told Reuters. “What I do know, and what I will assure the whole world of, is that my brother was a correct person and my brother did not do what they are accusing him of.”

Duberney Capador, 40, is accused of being among 28 men to take part in the raid, with 26 Colombians and the other two Haitian-Americans.

Seventeen of the men have been captured, three killed — including Capador — and eight remain at large, according to Haitian police.

Jenny Carolina Capador said that her brother — who retired in 2019 after a 21-year military career specializing in counterterrorism — was raising chickens and fish when a former colleague offered him work as a bodyguard.

“They made him an offer to go work at a security business, to provide security and collaborate with protection for important people, and they would pay him well,” she told Reuters.

She said that she spoke with her brother throughout the day of the assassination.

“In the last conversation I had with my brother, he told me, ‘We got here too late; unfortunately, the person we were going to guard, we couldn’t do anything,’” she recalled.

But later that evening, Capador wrote in a WhatsApp message that he was locked in a gun battle.

“He told me, ‘We’re trapped, they have us shut in and they are shooting,’” said his sister, recalling that he asked that she not tell their mother. “Until 5:50 [pm], I wrote to see how he was, and he said ‘good’ and from then I never heard anything more from my brother.”

Jenny Carolina Capador remained adamant that her brother was not part of an assassination plot.

“My brother did not go to threaten the life of the president,” she said. “I am 100-percent sure he is innocent.”