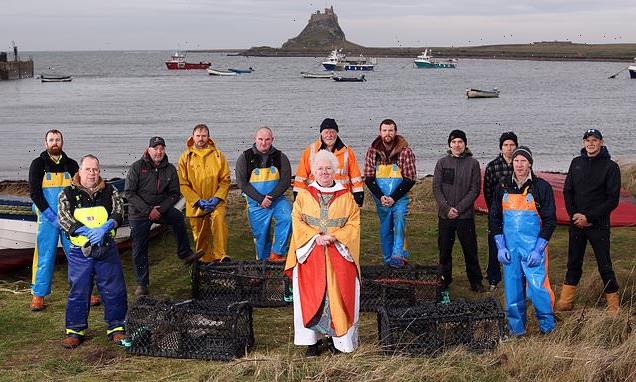 How Whitehall’s eco-zealots are threatening the livelihoods of families who have fished off Holy Island for 1,000 years

The fishermen of Holy Island occupy such a central role in the life of the community that they have a side-altar dedicated to them in the parish church of St Mary the Virgin.

It is decorated with fishing nets, sea birds and scallop shells. And, at Christmas, the nativity scene featuring Mary, Joseph and baby Jesus is set not in a stable but in a coracle attached to buoys.

Names of the island’s fishermen who died in the First World War hang from the north wall of the church and every Sunday the congregation sings the traditional seafarers’ hymn, Eternal Father, Strong To Save, with its famous line ‘O hear us when we cry to Thee, For those in peril on the sea’.

But today’s fishermen on Lindisfarne (as it’s also known) – many bearing the same surnames as those on the church wall – are in peril not so much from the treacherous waters of the North Sea off the Northumberland coast but from the Government. 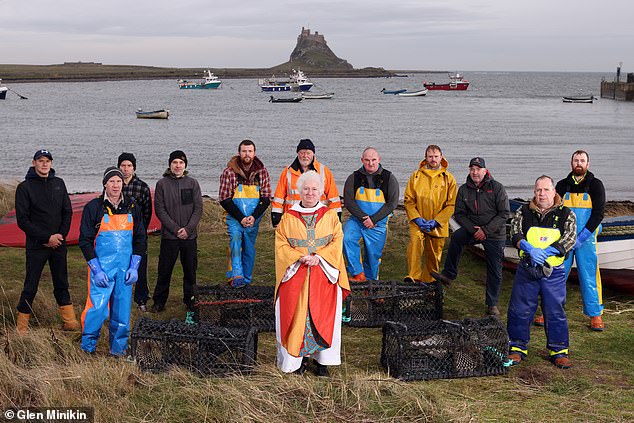 The fishermen of Holy Island occupy such a central role in the life of the community that they have a side-altar dedicated to them in the parish church of St Mary the Virgin. Pictured: Rev Sarah Hills with the fishermen protesting to overturn the pilot scheme which will leave them jobless and forced to move from the island

Defra, the Whitehall department responsible for fishing, proposes to create a Highly Protected Marine Area (HPMA) of 50 square miles (129 sq km) covering the island and parts of the nearby Farne Islands that will have the effect of banning fishing.

‘It will wipe us out and destroy Holy Island as a living and working community,’ says Shaun Brigham, 55, who has been fishing these waters since leaving school at the age of 15. ‘All that’s here is tourism and fishing – so take the fishing away and what would be left? Defra talks about ‘rewilding the sea’ but has produced no evidence that anything here needs rewilding.’

On the contrary, stocks of lobster and brown and velvet crab – which are the only sea-life that can be fished in what is already a highly regulated industry – are greater than they have been for decades, not least because it’s in the long-term interests of the fishermen to abide by strict sustainability rules.

All hen lobsters and crabs ‘berried’ with eggs – the terms used to describe a crustacean carrying eggs – are returned to the sea. Anything landed has to be of a certain size (at least 3.4 inches – 87mm – from the eye socket to the end of the back). Lobster pots have rubber wrapped round their metal bases so as not to disturb the sea bed and only a certain number of pots are allowed to be out at any one time.

A decision on the ban is expected in the next few weeks when Defra will decree which of five pilot HPMAs are to go ahead – but the uncertainty is already taking its toll on the fishermen and the village. ‘We don’t know whether to order in new pots and ropes,’ says Paul Douglas, 54, whose father, grandfather and great grandfather fished off Holy Island. ‘What’s the point in investing in the future if we don’t have one?’

Paul works alongside Johnny Gray, 34, who lives with his partner and daughter on the island. When I ask what he might do if his livelihood comes to an end, he points to a pair of full-length dungaree waders hanging from the ceiling of his fisherman’s hut.

‘I would probably end up like that but with a rope around my neck,’ he says. There are 13 fishermen living on Holy Island (the oldest is 75), who operate from five boats moored in the little harbour overlooked by Lindisfarne Castle.

If they can’t fish they would have to leave the village because the island – which has a year-round population of just 150 – is cut off from the mainland, with no ferry, for at least ten out of each 24 hours. Regular working hours for anyone living on Holy Island are impossible.

If the fishermen go, the primary school attended by their children would also go – and if the school goes, taking families with it, the post office would have no future.

The three pubs and tea rooms, where wives of the fishermen work, would also face a grim future, particularly in winter when the island goes into hibernation. In its consultation ‘fact sheet’, Defra talks loftily about how Holy Island is home to a ‘variety of threatened and/or important species’, but says nothing about the threat to the fishermen.

Indeed, the only mention of them refers to how their displacement to neighbouring ports could ‘lead to an increase in fishing pressure… and the potential to create conflict between fishers due to the lack of space to place additional pots’.

Nowhere in its document does Defra identify any deterioration in the marine environment due to the pot-fishing. Nowhere does it acknowledge how fishing on Holy Island has supported the tiny community for thousands of years. Nowhere does it accept that, without fishing, the village will become just another tourist theme park, albeit one regarded as a cradle of Christianity by virtue of St Aidan founding a monastery here in 635 AD, a status that helps it attract 650,000 visitors a year. 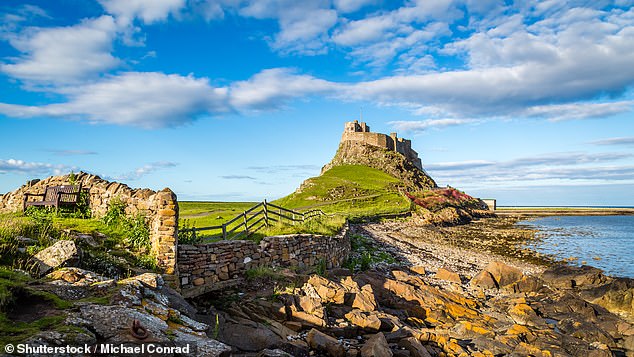 There are 13 fishermen living on Holy Island (the oldest is 75), who operate from five boats moored in the little harbour overlooked by Lindisfarne Castle (pictured)

Debbie Luke, who works in the post office that doubles up as a cafe, says: ‘We’re dealing with pen-pushers in London who have no idea what’s really going on here. It’s big Government bullying a small community.’

Or, as one local puts it, ‘there’s just a vague impression of apathetic officials spending a few hours on Google over a Pret salad at lunchtime, picking feasible places for their HPMA candidates list – remote, northern, less likely to make a fuss’.

But a big fuss is being made – and perhaps it’s fitting, given that the gospels were first translated by monks based at Lindisfarne monastery in the 8th century, that the fierce resistance to Defra’s proposal is being led by the island’s vicar, the Reverend Dr Sarah Hills.

After a stint at Coventry Cathedral, she’s been in her current post four years, during which time she has been working on a plan for the island for the next 20 years.

Canon Hills says: ‘The fishermen are the core of the community and are acutely aware of the importance of sustainability. Defra just didn’t bother to do any proper research before setting out its potentially devastating plan.’

The inference in the Defra document is that pot-fishing off Holy Island is bad for the marine environment. It speaks emotively about ‘important habitats and species’, the goal of ‘absorbing carbon’ and how the HPMA would ‘prevent further degradation and damage to the marine ecosystem subject to natural change’.

All this without specifying that anything detrimental of any kind is going on.

In fact, the seal population off Holy Island and the Farne Islands is booming like never before. In 1956, there were 751 pups counted, whereas in 2019, there were 2,823. In 2023 it is expected that there’ll be many more, making it a record year for grey seals.

Precise figures for 2021 are due to be published next month but Richard Bevan, a zoologist and senior lecturer at Newcastle University, says the seal population looks ‘incredibly dense’.

The fishermen also point to a study by Plymouth University, published in Nature magazine, which concluded that ‘commercial pot fisheries are likely to be compatible with marine conservation when managed correctly at low, sustainable levels’.

Anne-Marie Trevelyan, the local Conservative MP and minister at the Foreign Office, is on a collision course with her Government over the future of Holy Island.

‘We all want to see sustainable fishing and healthy marine life, no one more so than the fishermen of Holy Island who are already incredibly sensitive to marine life and heavily regulated,’ she says.

What’s more – and Defra makes no mention of this – some of the fishermen also act as trained coastguards, providing emergency first response and medical help on behalf of the North East Ambulance Service when access to the island is closed at high tide. This is a tradition that has been going on for at least two centuries.

Without coastguards living on Holy Island, there would be no way of providing a 999 statutory emergency service, both for residents and the more than hundreds of thousands of visitors who cross the mile-long causeway in their cars as tourists.

Every year some 40 or so of these visitors misjudge or ignore warnings about the tides that sweep speedily across the sands. Shortly before Christmas, Paul Douglas and Johnny Gray were called out to rescue a man and woman whose car had broken down on the causeway.

‘The woman was disabled and by the time we got there the water was up to her chest,’ says Douglas. ‘There was no way she could have got out on her own.’

Such heroics are not uncommon on Holy Island. In 1899, a schooner called Sea Belle, carrying cargo from the Moray Firth to Sunderland, began to sink near the Goswick Sands. Holy Island’s fishermen headed out and fired ropes on to the stricken vessel and saved the crew of two.

And in January 2022 villagers gathered to commemorate 100 years since the rescue of the crew of the trawler James B Graham by the Holy Island lifeboat, Lizzie Porter, which was manned by the fishermen. That night 60 men and women turned out to haul the lifeboat across the water-logged sands at low tide, with the wheels of the trailer regularly sinking into the soft mud. But thanks to the determination of the locals the lifeboat was afloat within 40 minutes of the alarm being given. 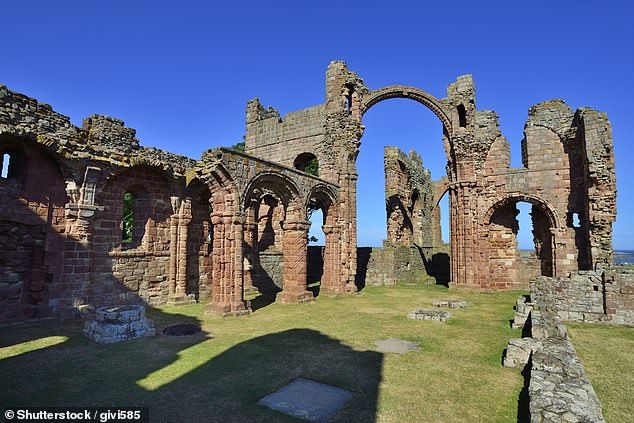 Pictured: The ruins of the Benedictine monastery of Lindisfarne

The crew then rowed four miles through a vicious storm but it was several hours before they could find a safe route through the rocks to get alongside the stricken ship and take on board its nine crew members.

Holy Island has endured more than its fair share of external threats over the years. It was the first place in Britain that the Vikings attacked in 793 AD, forcing the monks to flee, taking with them the body of St Cuthbert, who had become Bishop of Lindisfarne 200 years earlier. His remains were eventually interred at Durham Cathedral, where they remain to this day.

Benedictine monks returned to Holy Island in 1082 and rebuilt the monastery as a priory, including the magnificent, pink ‘rainbow arch’.

But they were forced to flee again in 1536 as victims of Henry VIII’s dissolution of the monasteries.

But neither the Vikings nor Henry VIII could bring an end to fishing on the island. The question is – can Defra?

It insists that it wants to take a ‘whole site approach’ but at the one and only public meeting on the island devoted to the issue, held on September 8, the day the Queen died, the fishermen were appalled at how ill-informed the civil servants were.

‘I felt sorry for some of them,’ says Shaun Brigham. ‘They were clearly just reading from a script.’

But did they listen? Canon Hills isn’t sure. ‘There’s a big difference between listening and genuinely hearing what is being said,’ she observes.

‘If fishing is banned, the visitor centre no doubt will wax lyrical about the role of the fishermen and there’ll be lobster pots on view. But why not let visitors witness first-hand what these brave men do for a living? Does Defra really want to rip the heart out of this community?’