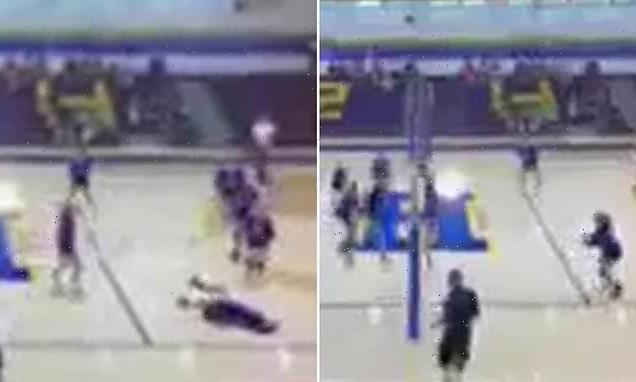 Footage of a North Carolina girl’s high school volleyball match has emerged in which a player suffered a serious injury after a transgender girl lobbed a ball at her opponent, striking her in the head.

The physical injuries suffered by the female student-athlete at Hiwassee Dam High School were to her head and neck.

It’s estimated that the volleyball was thrown at 70mph – and was described as ‘abnormally’ fast by one bystander.

Neither player has been identified.

And the incident has since had far-reaching implications for how the game is played in the state after news spread how the offending shot had been played by a biological male.

The Hiwassee Dam female player is still suffering from long-term concussion symptoms, including problems with her vision and has not been cleared to play.

The Cherokee County school board has subsequently voted 5-1 to forfeit all matches for its schools’ women’s volleyball teams against Highlands School, who the unnamed transgender player plays for. 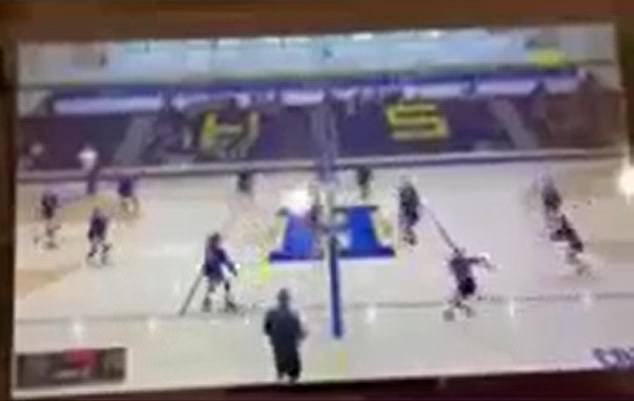 During a girls’ volleyball tournament last month, a Highlands High volleyball player, seen right, who was biologically male, pelted a player in the forehead with the ball 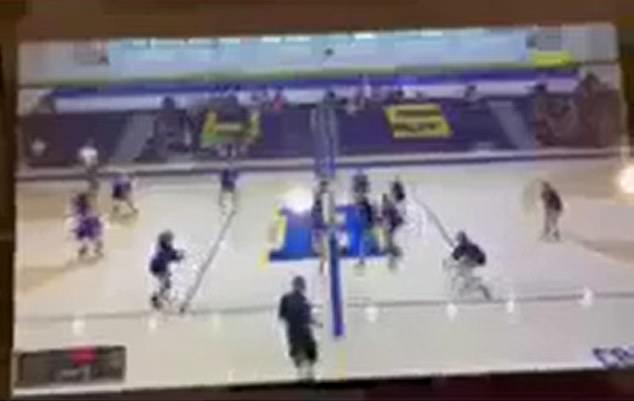 A transgender girl, seen right, could be seen lobbing a ball at her opponent striking her in the head

The board appeared to dance around the controversial subject of trans people playing sports for the teams whose sex they were not born into.

Indeed, the board did not refer to any players’ sexuality but instead cited concerns over safety.

‘The County will not participate in any volleyball games, varsity or junior varsity, against Highlands due to safety concerns,’ the minutes from the board’s meeting read.

The athletic director from Hiwassee Dam High School, David Payne, was present at the meeting commented that ‘a statement needs to be made that it [was] unfair and unsafe’ for teams to compete against Highlands. 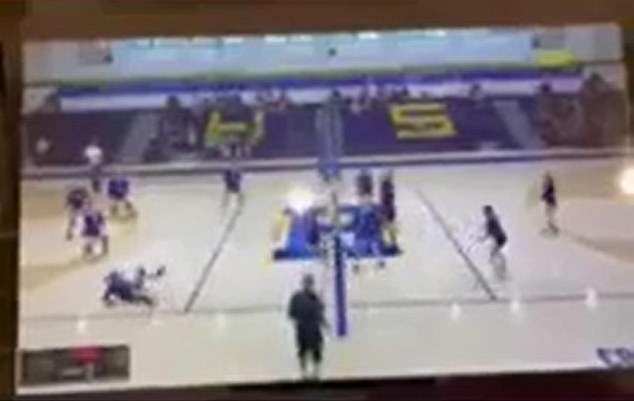 The Hiwassee Dam player, a biological girl, seen left, fell to the floor after being hit on the head 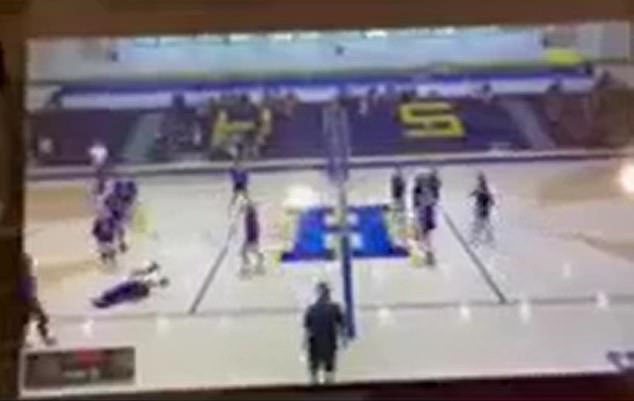 The girl can be seen sprawled out on the floor of the court. She suffered severe head and neck injuries, together long-term concussion symptoms, including vision problems

He noted, however, that there were ‘mixed feelings’ from players and parents involved.

‘There is a competitive advantage and a safety concern for certain teams — it’s not the same for all teams,’ Vice Chair Jeff Martin added. ‘I can tell you that the board wasn’t searching out this kind of thing. It was brought to our attention based on safety concerns.

‘The biggest thing for us, especially after seeing the video of the injury, we felt very strongly that it was a safety concern,’ board member Jeff Tatham said. ‘I think most of the board members also felt like there’s a competitive advantage issue.’

‘The county will not participate in any volleyball games, varsity or junior varsity, against Highlands due to safety concerns,’ the board declared. 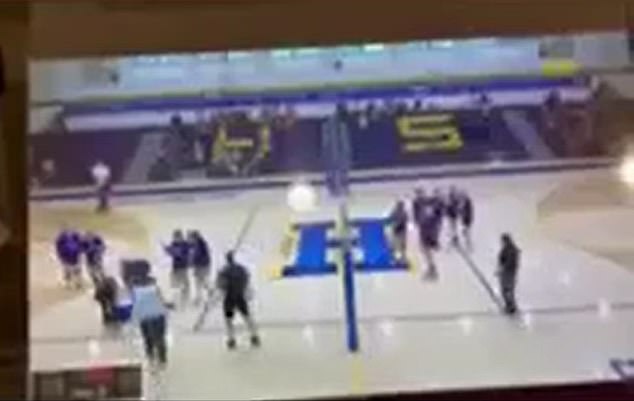 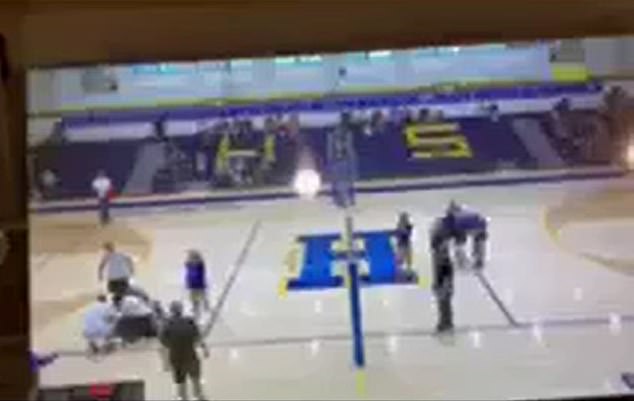 A 2015 study of volleyball players explained how males are significantly more effective than females at ‘attacking’ the ball toward their opponent’s side.

The body of males also allows for greater momentum and power on jump ball returns.

In recent months, the issue of transgender athletes competing in women’s sports has become a controversial topic but the parameters as to what is allowed vary. 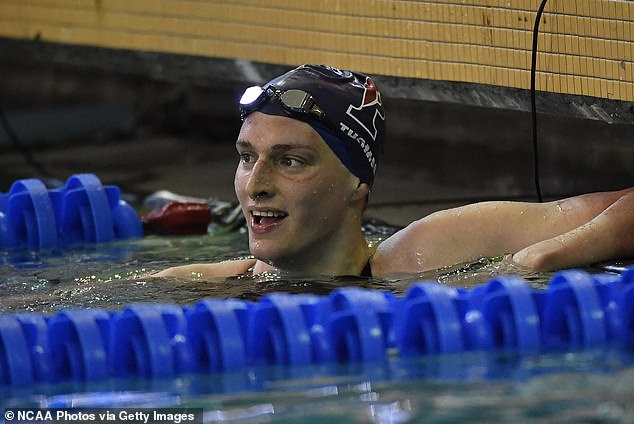 The issue took center stage this year with UPenn swimmer Lia Thomas, pictured, who began competing in women’s collegiate swimming a year and a half after transitioning

The issue took center stage this year with UPenn swimmer Lia Thomas, who began competing in women’s collegiate swimming a year and a half after transitioning.

Thomas went on to break several women’s records, much to the dismay of several of her teammates, and the NCAA and US Swimming bodies were criticized for allowing Thomas to compete.

The NCAA require testosterone suppression treatment for one year.

In USA Volleyball leagues, males’ testosterone levels must be within normal female reference ranges for at least six months.

Several states have even passed laws requiring athletes to participate in sports based on their biological sex.

Professional competitive swimming association FINA has since effectively banned trans women from competing in the sport, by saying they must have begun to transition before puberty kicked in, which is illegal or almost impossible to do across most of the US.

By the summer, 18 states had outlawed transgender students from competing in girls’ sports.

One notable example is Ohio, which passed a bill requiring students accused of being transgender to provide a doctor’s note detailing their sexual anatomy, their testosterone levels, and their genetic makeup.

In New Jersey, Republican lawmakers proposed the Fairness in Women’s Sports Act, which would require female student-athletes to verify the nature of their genitals to compete.

The bill’s sponsor, Sen. Michael Testa, compared genitalia checks to random drug tests that college athletes are subject to, and said he didn’t foresee any problems with irate parents accusing girls of being transgender.