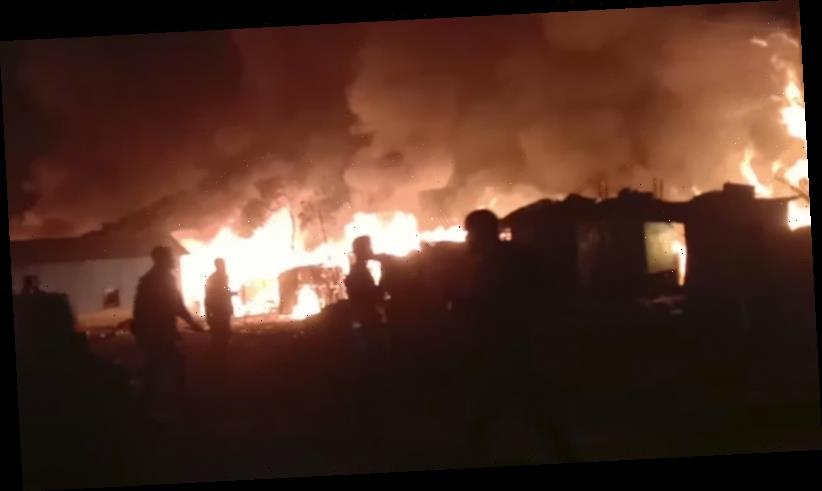 New Delhi: A large fire tore through a crowded Rohingya camp in the Cox's Bazar area of Bangladesh on Thursday, destroying hundreds of ramshackle shelters and forcing thousands of displaced Muslim refugees to flee in the northern winter chill.

The blaze claimed no lives but left hundreds of people without homes, according to aid workers and officials. It struck at a time when officials in Bangladesh look for long-term solutions for the hundreds of thousands of refugees who have crossed its border from Myanmar in recent years.

The fire erupted at around 1am in the Nayapara refugee camp in south-eastern Bangladesh. Fire service officials there said that the fire was brought under control within two hours and that they had opened an investigation to determine the cause. 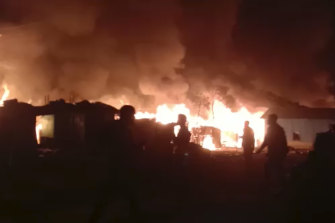 A fire races through the sprawling Rohingya Nayapara Camp in Cox’s Bazar district in Bangladesh on Thursday.Credit:AP

About 550 shelters were lost, as well as shops and other facilities, said the Inter Sector Coordination Group, a humanitarian organisation that works with the refugees who have gathered in Cox's Bazar.

Residents said huge flames quickly spread from one edge and enveloped the entire camp. Some said that firefighters initially struggled to douse the flames amid the chaos, as people in neighbouring camps also fled to escape the blaze.

"When I opened my eyes, I saw fire everywhere," said Haleema Khatoon, who lived in the camp along with her two children and husband and said she lost everything in the blaze. "The sky turned red, and smoke was everywhere." 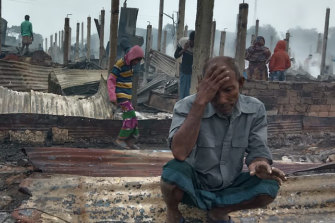 A Rohingya refugee sits by charred remains after the fire in Nayapara Camp in Cox’s Bazar.Credit:AP

Khatoon and others said the confusion and delays may have doomed some shelters that could have been saved.

The Inter Sector Coordination Group said that local fire officials arrived quickly and were able to contain the blaze.

Khatoon, 34, fled Rakhine state in 2017 and gave birth to her second child in the camp. She said she had turned her small hut into a home for her family. Now, she said, she and her family had no food to eat and nowhere to go.

More than 750,000 Rohingya, a predominantly Muslim ethnic group, have fled Myanmar to Bangladesh since a campaign of killing, rape and arson began against them in 2017. The area near Cox's Bazar, in southern Bangladesh, has turned into a makeshift home for hundreds of thousands of Rohingya refugees fleeing the campaign of violence carried out by Myanmar's military. The Rohingya have been persecuted relentlessly by the government and mobs of Buddhists, who make up the majority in Myanmar.

The settlements there turned into mega camps as the huge influx of desperate people fleeing conflict or persecution continued to trickle in.

Onno van Manen, a country director for Save the Children in Bangladesh, said the fire was yet another devastating blow for the displaced Rohingya Muslims.

Manen said that since 2017 more than 1 million refugees, half of them children, have lived in cramped camps with little freedom of movement, inadequate access to education and abuse, including child marriage.

"Put simply, despite the relentless efforts of humanitarian communities, a refugee camp is no place for a child to grow up," he said.

In May last year, a similar fire reduced to ashes more than 400 shelter homes in the nearby Kutupalong refugee camp in Cox's Bazar. And with an increasing population and new shelter homes being built over time, officials say it has become increasingly difficult for firefighters to navigate slum areas.

Authorities in Bangladesh say they are trying to reduce the population at some camps, with a plan to move 100,000 people to an island in the Bay of Bengal. Rights groups have criticised the plan, saying that the Rohingya were yet again being forcibly displaced. More than 1600 refugees have already been moved.

Mahbub Alam Talukdar, a Bangladeshi relief official, said the Thursday blaze broke out in E-block of the Nayapara refugee camp, and officials continue to assess the damage.

"Refugees have been shifted to another place and we are helping them with food and necessary items." Talukdar said. "We will try to rebuild their shelters quickly."