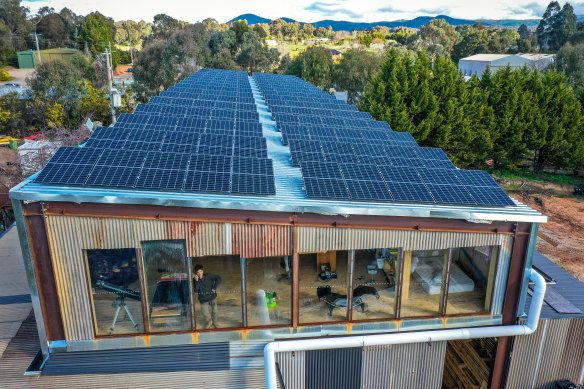 The Yackandandah post office building is among the finest examples of heritage architecture in the charming High Country village, and stands out for its irregular stone walls and fold-back wooden window shutters.

By chance, its builders also delivered a masterstroke in future-proofing – designing a roof ideally oriented for a large bank of solar panels.

Postmaster Chris Horton says it was almost as though the 165-year-old building was waiting for the panels when installers mounted them two years ago. 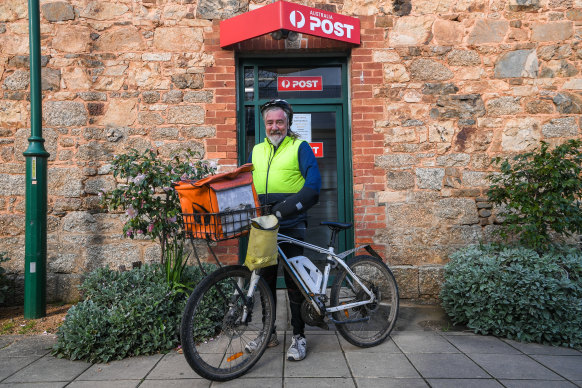 Postie Dave outside the Yackandandah post office on his electric bike. Credit:Justin McManus

“They didn’t even have to put any elevations on the panels because it was the perfect angle,” he says.

The postmaster is far from alone in embracing solar power.

The small town of Yackandandah is aiming to become one of the first in Australia to rely entirely on renewable energy.

But Yackandandah is not alone in its push for green power. Other communities from Mallacoota to Phillip Island are following suit and beginning to create their own innovative and small-scale electricity systems free of fossil fuels.

Their rush to renewables is about more than reducing carbon emissions and saving money. 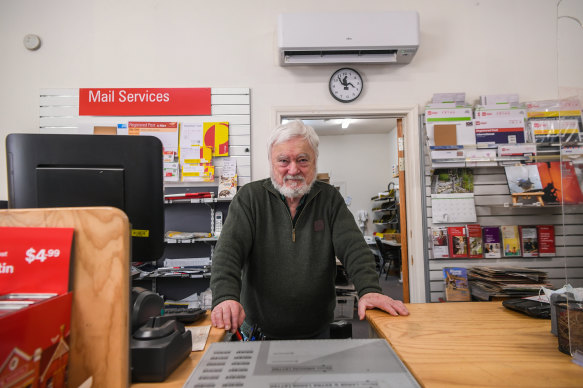 For many communities, it is about survival as they brace for more fires, floods and wild storms that inflict extensive damage on electricity infrastructure and leave them disconnected from the wider power network.

The cost of batteries still remains a hurdle for communities striving to reach their renewable potential.

However, financial benefits are often spur businesses and households to begin generating their own power.

He has saved more than $5000 in power bills and now only pays for electricity during four months of the year.

The system powers two mail delivery bicycles and lights, heating and cooling for the post office.

But saving money was not his sole motivation.

“It was more about can we make a difference and can we show other businesses how to do it?” Horton says. “That’s pretty much how I felt about it.”

The Yackandandah township is protected by strict heritage controls, which prohibit mounting solar panels on historic buildings if they can be seen from the main street.

But walk down the side of these historic shopfronts and an array of solar panels come into view, rising against the forested slopes of Mount Murramurrangbong and Mount Big Ben.

Matthew Charles-Jones, co-founder of non-profit group Totally Renewable Yackandandah, says about 40 per cent of buildings on the main street have solar panels.

He was an early adopter himself, putting a rooftop system on his Yackandandah home about 15 years ago. 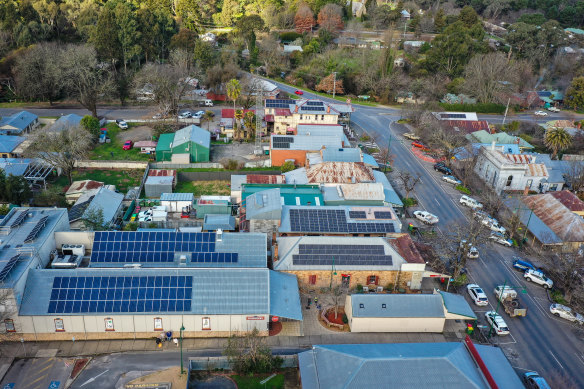 The solar panels of Yackandandah.Credit:Justin McManus

More recently he installed a battery and uses this system to power his home appliances, lawn mower and chainsaw.

“I haven’t paid a bill since 2008,” he says. “I do all my gardening with that electric stuff. It’s great because it’s light. There’s no petrol. It’s quiet.”

Totally Renewable Yackandandah initially hoped the town would reach its 100 per cent renewable milestone this year, but is not there yet. The volunteer group now thinks its target is achievable by the end of next year.

Still, the buy-in from the community has been remarkable. There are solar panels on pubs, the sawmill, water treatment plant, fire station and many homes.

This has been driven mostly by community-level and individual investment, accessing government grants and working with existing power and distribution companies.

Almost every public building has solar panels. Charles-Jones says the solar penetration rate across the township has now reached an average of 60 per cent, including those public buildings, private residences and businesses. 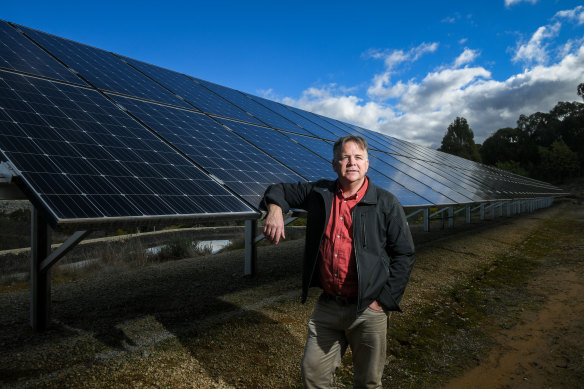 Many buildings are fitted with small “ubi” boxes that provide “site-by-site intelligence”, tracking how much energy is being created and used across the town.

Charles-Jones, who now works for energy distribution company AusNet Services, says the units help regulate electricity use and people can choose to run their appliances when generation is plentiful or power down when production is lower.

He says these networked panels operate as a “virtual power plant”.

Many residents and businesses are customers of community-owned electricity retailer Indigo Power, which ensures excess solar electricity is shared locally.

But to become fully renewable, Charles-Jones says the town needs to increase storage capacity – about 60 sites with solar panels also have batteries connected.

Totally Renewable Yackandandah is itself trying to deliver more electricity storage and recently became a shareholder in a community battery that is majority owned by Indigo Power.

The battery is about the size of a caravan and sits out the front of Ben Gilbert’s sawmill, just outside the town centre. 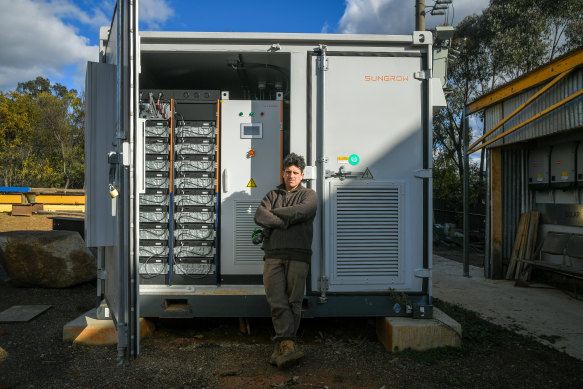 The 274-kilowatt-hour battery is fed by dozens of panels spread across the expansive roof of Gilbert’s shed where he creates mammoth sculptures from timber, stainless steel and stone.

Gilbert, a former Greens election candidate, does not use electricity generated by fossil fuels, and sources his wood mostly from salvaged timber.

Battery storage is becoming a crucial safety measure during disasters such as bushfires when towns are often cut off from external power supplies.

Charles-Jones says the town, which is surrounded by mountain ranges and forests, has faced three serious bushfire threats in the past 15 years.

The town’s water treatment plant is now also powered in large part by a solar farm and battery that can operate for periods without drawing on the national electricity grid.

This could prove vital during a bushfire.

Charles-Jones says the push for renewables may not be universal in Yackandandah, but it has united many residents, sometimes across generations.

The 14-year-old says generating rooftop power has helped give her an appreciation of what it takes to create electricity. She has adapted her lifestyle by taking shorter showers. 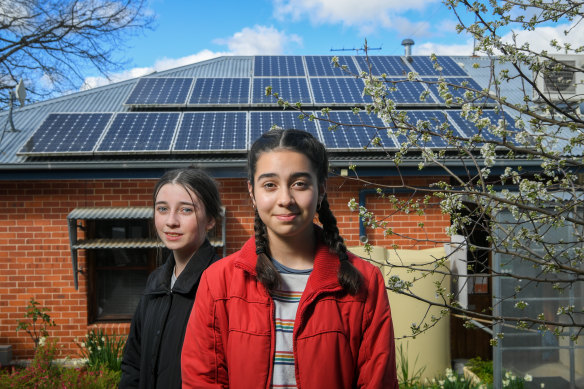 “Definitely we’re more aware of our power usage in our house,” she says.

Charlie has attended some Totally Renewable Yackandandah meetings to provide a youthful perspective and also speaks to primary school children with her cousin Eadie Hartwig about how young people can communicate their concerns to parliamentarians.

Often, towns seeking to become self-sufficient will still maintain some connection to the wider grid as a safeguard.

But Wood believes small-scale networks do offer a way forward and says many communities, even those in cities, are seeking to become more self-sufficient.

“They should be encouraged and supported, and we need to see a lot more of that,” he says.

AusNet has been working with Yackandandah and other communities to increase solar generation and storage.

The company’s general manager Dhammika Adihetty agrees Yackandandah provides a model that can be adapted elsewhere, even in Melbourne.

“The biggest impediment right now is the cost of storage,” he says.

Adihetty points out that a household battery can typically cost about $10,000 – a significant outlay on top of solar panels for many family budgets.

He expects Yackandandah to reach its renewable target within five years if it can bring on enough storage.

Like Yackandandah, residents in Mallacoota are aiming for their town to become 100 per cent renewable. The Black Summer fires made that goal more urgent.

In December 2019, some homes lost power for more than two weeks after the blazes roared across East Gippsland and severed the town’s connection to the electricity grid.

But problems with power had plagued Mallacoota long before.

Until last year, the town had relied on a single 240-kilometre power line connecting it to the national electricity network. There were frequent outages, caused by falling branches and bark, animals and birds. 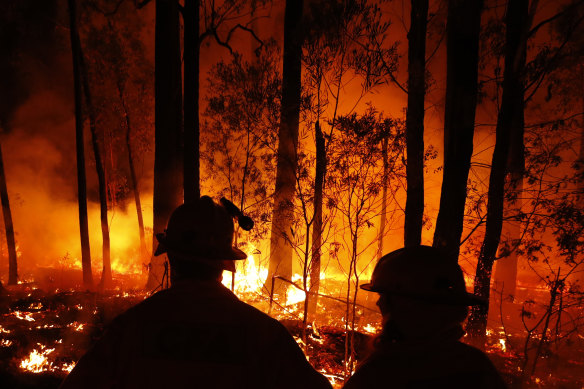 The Black Summer fires in Mallacoota left the community disconnected from the main power grid for an extended period. Credit:Darrian Traynor/Getty Images

Tricia Hiley moved to Mallacoota in 2010 from North Warrandyte. The following year, she says, the town had 65 power outages, adding up to 56 hours without electricity.

Even houses fitted with solar panels would still lose power in full sun when the line into town went down because inverters could not feed power back into the grid for safety reasons.

In August 2020, a power outage in Mallacoota lasted 18 hours.

“It was beautifully sunny here but there was a big storm in Melbourne,” Hiley says. “It had taken out the grid. But those of us with solar could have powered the whole town.”

She says about 30 per cent of houses in Mallacoota had solar panels before the fires.

Hiley, co-ordinator of Mallacoota Sustainable Energy Group, says there have been far fewer outages since a community battery was installed last year.

It provides one megawatt-hour of electricity – enough to power the town for more than an hour during peak use. A diesel generator is also on standby.

The battery, funded by AusNet, is constantly testing the external power line to see if it needs to supply back-up electricity.

If it detects an anomaly it will put the system into “island” mode, allowing residents and businesses to continue drawing power from the local grid.

“We don’t know when we’re on the battery. It flips over automatically. For the past few months, there’s really been no outages at all,” Hiley says.

As part of the group’s mission to expand solar energy, it secured $50,000 in government funding to buy a 44-panel system now operating at the town’s water treatment plant.

East Gippsland Water has a lease agreement with the group for the electricity generated on site, and that money will be used for other renewable projects.

Closer to Melbourne, on Phillip Island, community energy groups are working on a range of battery projects they hope will help them become 100 per cent renewable by 2030.

Almost 24 per cent of private dwellings have solar panels.

But Totally Renewable Phillip Island co-ordinator Zoe Geyer hopes a 10-megawatt-hour battery – to come online later this year – will help households access green energy even if they do not have their own rooftop systems, through an energy sharing trial.

The group is also looking at funding options to install 10 small neighbourhood batteries on power lines.

“This is a new energy future that benefits everyone on the island and gives people ownership and a sense of pride,” Geyer says. 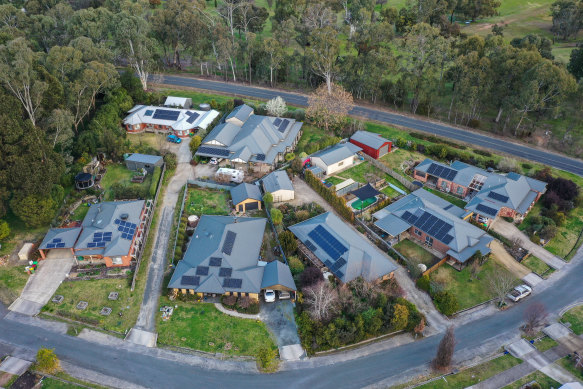 Back at the Yackandandah post office, Chris Horton would like to install a battery but because he does not own the building, he is not ready to meet the cost.

“I’m a little uncertain about whether that makes good investment sense,” he says.

But then again, Horton wonders whether Yackandandah might find another way to share the cost of batteries within the community and deliver more renewable power to the people.

Get to the heart of what’s happening with climate change and the environment. Our fortnightly Environment newsletter brings you the news, the issues and the solutions. Sign up here.