Nairobi: The withered carcasses of livestock are reminders that drought has descended yet again in northern Kenya, the latest in a series of climate shocks rippling through the Horn of Africa.

As world leaders address a global climate summit in Glasgow, pastoralists watch their beloved animals suffer from lack of water and food. Yusuf Abdullahi says he has lost 40 goats. 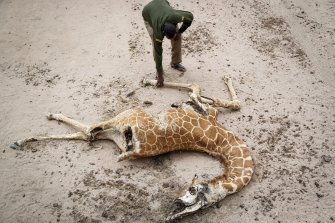 Mohamed Mohamud, a ranger from the Sabuli Wildlife Conservancy, looks at the carcass of a giraffe that died of hunger near Matana Village, Wajir County, Kenya.Credit:Brian Inganga

Kenya’s government has declared a national disaster in 10 of its 47 counties. The United Nations says more than 2 million people are severely food insecure. And with people trekking farther in search of food and water, observers warn that tensions among communities could sharpen.

Wildlife have begun to die, too, says the chair of the Subuli Wildlife Conservancy, Mohamed Sharmarke. 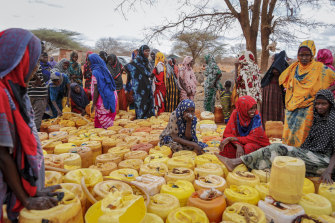 Kenyan women of Somali origin wait with their containers for a water distribution from the government near Kuruti, in Garissa County, Kenya.Credit:AP

“The heat on the ground tells you the sign of starvation we’re facing,” he says.

Experts warn that such climate shocks will become more common across Africa, which contributes the least to global warming, but will suffer from it most. 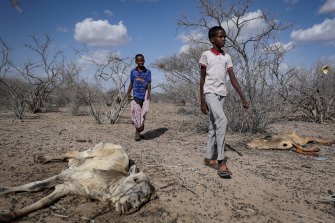 The children of herders walk past cattle carcasses in the desert near Dertu, Wajir County, Kenya.Credit:Brian Inganga

“We do not have a spare planet in which we will seek refuge once we have succeeded in destroying this one,” the executive director of East Africa’s Intergovernmental Authority on Development, Workneh Gebeyehu, said last month while opening a regional early warning climate centre in Kenya’s capital, Nairobi.

“Africa, while currently responsible for a negligible amount of total global greenhouse gas emissions, is under significant threat from climate change,” he said at the centre’s opening. The continent is responsible for just 4 per cent of global emissions.

Kenyatta was among the African leaders speaking at the global climate summit as they urged more attention and billions of dollars in financial support for the African continent.

Get weekday updates on the climate summit that will shape our future. Sign up to our COP26 newsletter here.