Before COVID-19 arrived in Australia, about 5 per cent of Australians typically reported moderate to severe symptoms of depression in the previous two weeks, but by April 2020 with the nation in its first lockdown that increased five-fold.

By August, one in five people had had at least occasional thoughts in the previous two weeks “that they would be better off dead”. 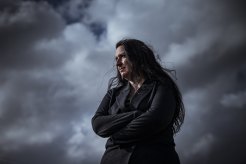 Zoe Vafiadis found herself very anxious during harsh lockdown restrictions, mainly due to concerns for her son’s wellbeing.Credit:Chris Hopkins

Monash University research has found strict lockdowns led to the highest levels of depression and anxiety on record, but where restrictions were eased people reported lower, while still significant, levels of mental health problems.

A survey of 9000 people around the country during Victoria’s 112-day lockdown found irritability was widespread but significantly higher in Victoria, where 73 per cent of people reported it compared with 58 per cent in other states.

Professor Jane Fisher said if people are feeling low they should realise they are not alone.Credit:Eddie Jim

The research, headed by clinical psychologist Professor Jane Fisher, found women, people aged 18 to 29, people in marginalised groups, those living alone or with care-giving responsibilities, especially for a family member with a disability, were most likely to report mental health problems, as were people who lost jobs or whose courses were suspended.

“The main thing that shocked us was the difference between the prevalence of significant distress in Victoria during the long lockdown compared with other states. This provides a way of quantifying how bad severe lockdown is psychologically for the population,” said Professor Fisher.

“In states where restrictions had eased or there had never been restrictions … mental health hadn’t immediately bounced back – we thought we’d see a recovery effect and it wasn’t so clear.

“I think this says these problems are significant and population-wide, and they really do influence people’s capacity to maintain optimism and continue to fulfil their responsibilities.”

People should know “if you are feeling low, you are not alone”, and that these psychological states are associated with reduced levels of energy, functional efficiency, optimism, creativity and engagement and the capacity to concentrate and problem-solve.

However, Professor Fisher said the research showed most people viewed themselves as “not in an abnormal state that requires professional care, but responding in a normal way to an abnormal circumstance, and I have to completely agree with that”.

‘The big risk factor found in this study was loss of employment … which shows the importance of the JobKeeper program in protecting mental health.’

“I agree with the authors’ conclusions that reducing this distress is not just about increasing mental health services. We need to reduce the risk factors leading to distress. The big risk factor found in this study was loss of employment due the pandemic, which shows the importance of the JobKeeper program in protecting mental health.”

Beyond Blue’s lead clinical advisor, Dr Grant Blashki, said the study provided “evidence it is necessary to clarify how best to assist people during these periods … this helps inform the way in which we can best provide assistance to those most in need”.

The research accords with what Beyond Blue had noted, with demand for support services during lockdowns increasing on average about 14 per cent.

The study, “Qualifying the mental health burden of the most severe COVID-19 restrictions: A natural experiment”, was published in the Journal of Affective Disorders. It found despite more Victorians having been infected or knowing someone who had the virus, people’s mental health problems were more closely linked to restrictions than fear of infection.

Melbourne woman Zoe Vafiadis said worry about her son’s welfare during lockdown, as he has autism and was missing important learning support to prepare him for entering mainstream school, caused the onset of anxiety. She had not previously experienced such symptoms.

“I tend to find myself thinking in circles … there is really no way to plan while things are up in the air. I’ve never really laid awake at night worrying about things before,” said Ms Vafiadis, who works in customer service.

“For me, my anxiety has also been about how the virus might mutate and start to attack children, that sort of thing. Things I have absolutely no control over.”

If you or anyone you know needs support call Lifeline on 131 114, or Beyond Blue’s coronavirus mental wellbeing support service on 1800 512 348.