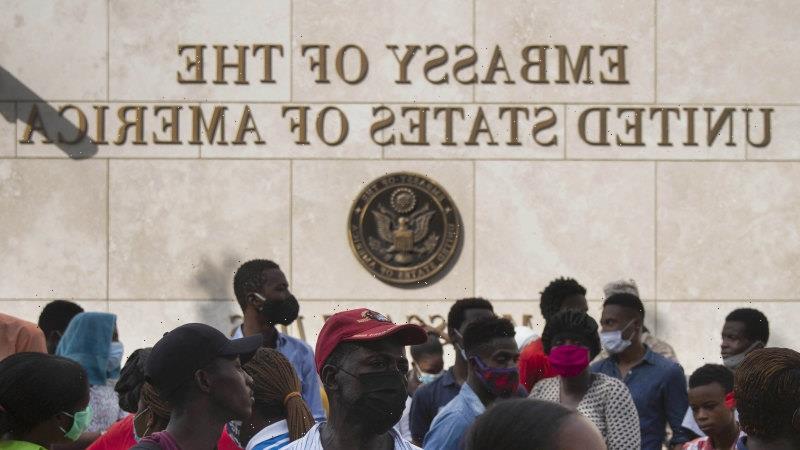 Port-au-Prince, Haiti: Haiti’s interim government said it asked the US to deploy troops to protect key infrastructure as it tries to stabilise the country and prepare the way for elections in the aftermath of President Jovenel Moïse’s assassination.

“We definitely need assistance and we’ve asked our international partners for help,” Interim Prime Minister Claude Joseph said in a phone interview late on Friday (Saturday AEST). “We believe our partners can assist the national police in resolving the situation.”

The US has reuffed the request, with a senior US administration official telling Reuters there were “no plans to provide US military assistance at this time”. 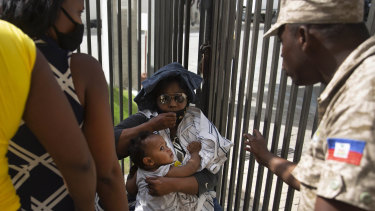 A Haitian police asks a woman to move away from a gate at the US Embassy in Port-au-Prince, Haiti.Credit:AP

The stunning request for US military support recalled the tumult following Haiti’s last presidential assassination, in 1915, when an angry mob dragged President Vilbrun Guillaume Sam out of the French Embassy and beat him to death.

In response, President Woodrow Wilson sent the Marines into Haiti, justifying the American military occupation — which lasted nearly two decades — as a way to avert anarchy.

But the Biden administration has so far given no indication it will provide military assistance.

For now, it only plans to send FBI officials to assist with the ongoing investigation into a crime that has plunged Haiti, a country already wracked by gaping poverty and gang violence, into a destabilising battle for power and constitutional standoff.

On Friday, a group of lawmakers declared loyalty and recognised Joseph Lambert, the head of Haiti’s dismantled senate, as provisional president in a direct challenge to the interim government’s authority. They also recognised as Prime Minister Ariel Henry, whom Moïse had selected to replace Joseph a day before he was killed but who had not yet taken office or formed a government.

Joseph expressed dismay that others would try to take advantage of Moïse’s murder for political gain.

“I’m not interested in a power struggle,” said Joseph, who assumed leadership with the backing of police and the military. “There’s only one way people can become president in Haiti. And that’s through elections.”

Joseph spoke as more details emerged of a killing that increasingly has taken the air of murky, international conspiracy involving a Hollywood actor, a shootout with gunmen holed up in a foreign embassy and a private security firm operating out of a cavernous warehouse in Miami. 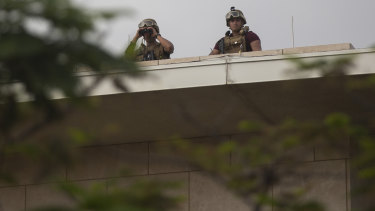 US soldiers stand guard on the rooftop of the US Embassy.Credit:AP

Solages, 35, described himself as a “certified diplomatic agent,” an advocate for children and budding politician on a now-removed website for a charity he started in 2019 in south Florida to assist resident of his home town of Jacmel, on Haiti’s southern coast.

He worked briefly as a driver and bodyguard for a relief organisation set up by Penn following a magnitude 7.0 earthquake that killed 300,000 Haitians and left tens of thousands homeless. He also lists as past employers the Canadian Embassy in Haiti. His Facebook page, which was also taken down following news of his arrest, features photos of armoured military vehicles and a shot of himself standing in front of an American flag. 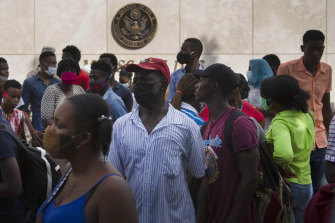 Haitians outside the U.S. Embassy amid rumors on radio and social media that the US will be handing out exile and humanitarian visas. Credit:AP

Joseph refused to finger any attackers but said that Moïse had earned numerous enemies while attacking powerful oligarchs who for years profited from overly generous state contracts.

Some of those elite insiders are now the focus of investigators, with authorities asking that presidential candidate and well-known businessman Reginald Boulos and former Senate president Youri Latortue meet with prosecutors early next week for questioning. No further details were provided and none of the men have been charged.

Analysts say whoever plotted the brazen attack likely had ties to a criminal underworld that has flourished in recent years as corruption and drug trafficking have become entrenched. Even before Moïse’s murder, Port-au-Prince already had been on edge due to the growing power of gangs that displaced more than 14,700 people last month alone as they torched and ransacked homes in a fight over territory.