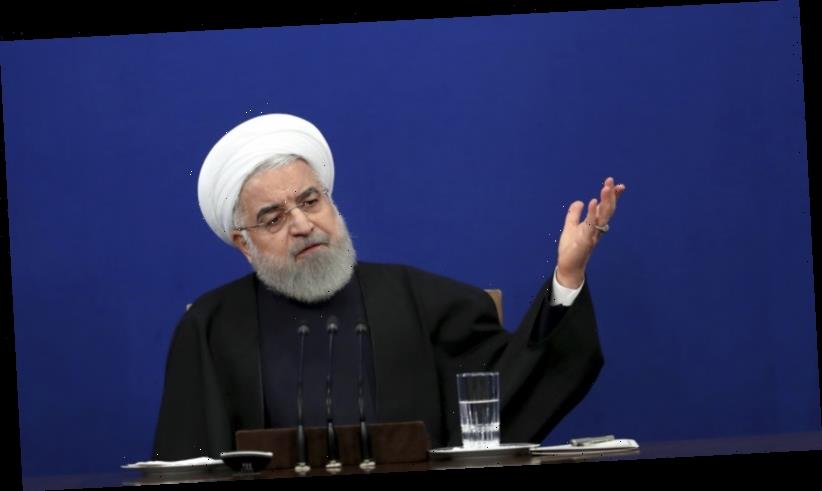 Washington: Iran is dramatically ramping up production of enriched uranium in the wake of the Trump administration's decision to abandon the 2015 nuclear deal, the UN nuclear watchdog has confirmed in a report that also criticised Tehran for blocking access to suspected nuclear sites.

According to the report, the country now appears to have enough enriched uranium to produce a single nuclear weapon, though it would take months or years to manufacture a warhead and deliver it over long distances. 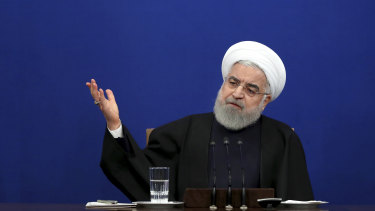 Iran’s President Hassan Rouhani. The country continues to flaunt the 2015 nuclear deal which still stands even though the US has withdrawn. Credit:AP

Inspectors from the International Atomic Energy Agency reported a near-tripling of Iran's stockpile of low-enriched uranium just since November, with total holdings more than three times the 300-kilogram limit set by the nuclear accord. Iran also substantially increased the number of machines it is using to enrich uranium, the agency said, allowing it to make more of the nuclear fuel faster.

The report is the first since Iran announced it would no longer adhere to any of the nuclear pact’s restrictions on uranium fuel production, in a protest of the Trump administration's decision to walk away from the deal. Iran has declined to formally pull out of the agreement, known as the Joint Comprehensive Plan of Action, in which it agreed to sharply curtail its nuclear activities and submit to intrusive inspections in exchange for relief from economic sanctions.

Inspectors confirmed that Iran now possesses more than 1020 kilograms of low-enriched uranium – up from 372 kilograms in the northern fall. The additions to the stockpile theoretically could allow Iran to build a nuclear weapon more quickly if it decided to do so, although the IAEA found no evidence that Iran is taking specific steps towards nuclear weapons production. The low-enriched uranium, the kind typically used in nuclear power plants, would have to undergo further processing to be converted to the highly enriched uranium needed for nuclear bombs. 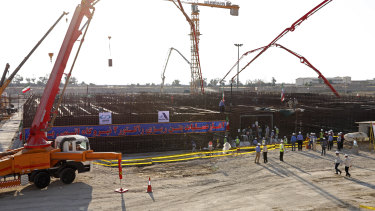 Concrete is poured for the base of the second nuclear power reactor at Bushehr plant, south of Tehran, Iran, late last year. It’s the second Bushehr reactor, and the second built with help from Russia. Credit:Atomic Energy Organisation of Iran/AP

In a rare step, the watchdog agency also criticised Iran for blocking its efforts to investigate claims of undisclosed nuclear activity at three sites. The agency sent letters demanding access to the sites, where Iran is suspected of storing equipment and other material used in past nuclear research.

Rafael Grossi, chief of the UN nuclear watchdog which released the report along with the International Atomic Energy Agency (IAEA) said: "we have been requesting some information and access from Iran but we haven't been getting the information we require".

"We have insisted and despite all our efforts we have not been able to get that, so the situation requires on my part such a step because what this means is that Iran is curtailing the ability of the agency to do its work."

Speaking after meetings in Paris, Grossi said the issue was serious and he hoped that Iran would return to full compliance after the IAEA's board of governors meets in Vienna next week.

"I sincerely hope that Iran will listen to us and listen to the voice of the international community at the board of governors and assess that it is in their own interest to cooperate with us," he said.

"We will be walking towards a crisis [if not]," he said. 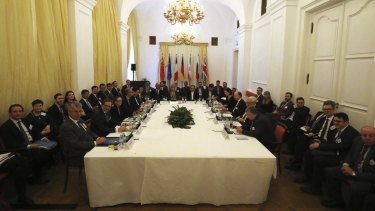 After a 2019 visit to one of the sites, IAEA officials reported finding unexplained traces of enriched uranium. Inspectors have since observed Iran carrying out activities "consistent with efforts to sanitise" one of the locations, the agency said in the report.

Iran's facilities came to light after the release of a trove of stolen nuclear documents taken from inside Iran by Israeli operatives in 2018. The stolen records offered new insight into Iran's well-documented efforts to build nuclear weapons early in the last decade. Iranian scientists conducted extensive research on weapons components as part of a secret initiative dubbed Project 119 but shelved the effort after the country's leaders ordered the program halted in 2003, US officials say. Afterwards, Iran focused instead on making nuclear fuel, building two large factories for making enriched uranium.

The 2015 Iran deal was co-signed by the United States, Russia, China, Britain, France and Germany. In it, Iran agreed to sweeping restrictions on its nuclear activities, from limits on its uranium stockpile to curbs on the number of centrifuges – machines used to enrich uranium – that it could operate. Iran also agreed to remove and disable a nuclear reactor that US officials feared could be used to make plutonium for nuclear bombs. Some restrictions were set to expire after 15 years.

President Donald Trump ridiculed the Obama-era deal during his presidential campaign, calling it a "disaster" and the "worst deal ever". Although Trump administration officials confirmed that Iran was honouring the terms of the agreement, the White House in 2018 said it was quitting the accord and reimposing harsh economic sanctions in an effort to force Iran to agree to even tougher limits. The other signatories have continued to honour the agreement, although Iran's recent defiance has spurred concerns that the deal will collapse, freeing Iran to further accelerate its nuclear program.