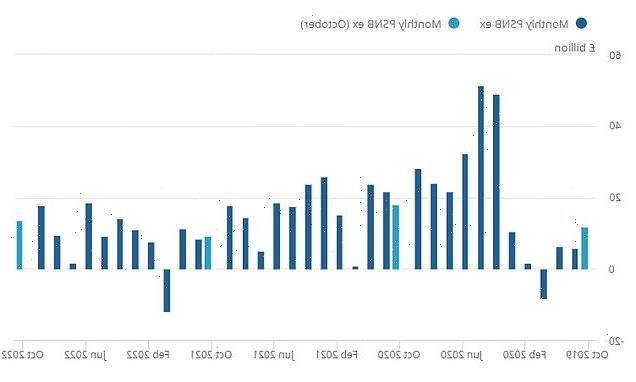 Jeremy Hunt today admitted the UK does not have an ‘easy path’ after figures showed another spike in borrowing and the impact of the energy bills bailout.

The Chancellor underlined the need to put the public finances back on a ‘sustainable path’ as borrowing hit £13.5billion in October.

That was £4.4billion higher than last year and the fourth highest figure for the month on record – although in a bright spot far lower than the £21billion analysts had expected.

Total public sector spending grew to £91.2billion in October, after central government spending increased by £6.5billion to £76.8billion for the month.

The ONS estimated that this included around £3billion on the cost of energy support schemes, including £1.9billion for the £400 home energy discount payments.

Meanwhile, servicing the £2.5trillion debt mountain – a proportion of which is linked to soaring RPI inflation – cost £6.1billion in the month. 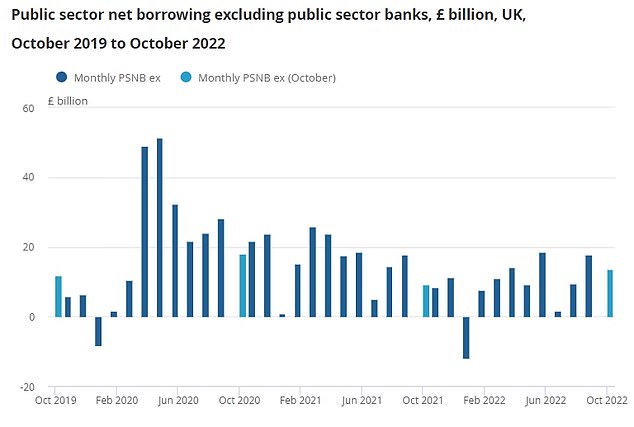 Chancellor Jeremy Hunt underlined the need to put the public finances back on a ‘sustainable path’ as borrowing hit £13.5billion in October 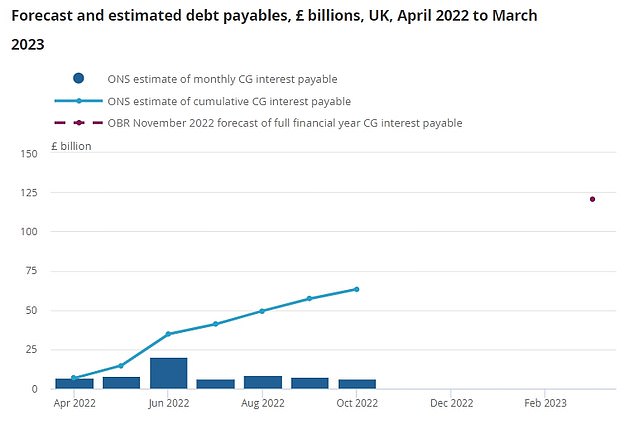 Servicing the £2.5trillion debt mountain – a proportion of which is linked to soaring RPI inflation – cost £6.1billion in the month

Mr Hunt said: ‘It is right that the Government increased borrowing to support millions of business and families throughout the pandemic and the aftershocks of Putin’s illegal invasion of Ukraine.

‘But to tackle inflation and ensure the economic stability needed for long-term growth, it is vital that we put the public finances back on a more sustainable path.

‘There is no easy path to balancing the nation’s books but we have taken the necessary decisions to get debt falling while actively taking steps to protect jobs, public services and the most vulnerable.’

Public sector receipts – money gained from the public sector, largely through taxes – were £77.6billion for October.

The fresh data come days after the Office for Budget Responsibility (OBR) said government borrowing for the year is set to be higher than it originally forecast in March.

OBR estimates also indicated that higher interest rates mean that the cost of servicing Government debt will double to over £120billion next year and make public finances ‘more vulnerable to future shocks’. 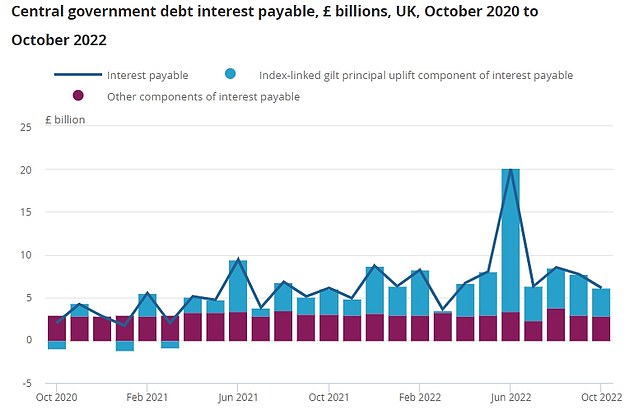 Much of the government’s debt pile is linked to RPI inflation, which has been rising sharply