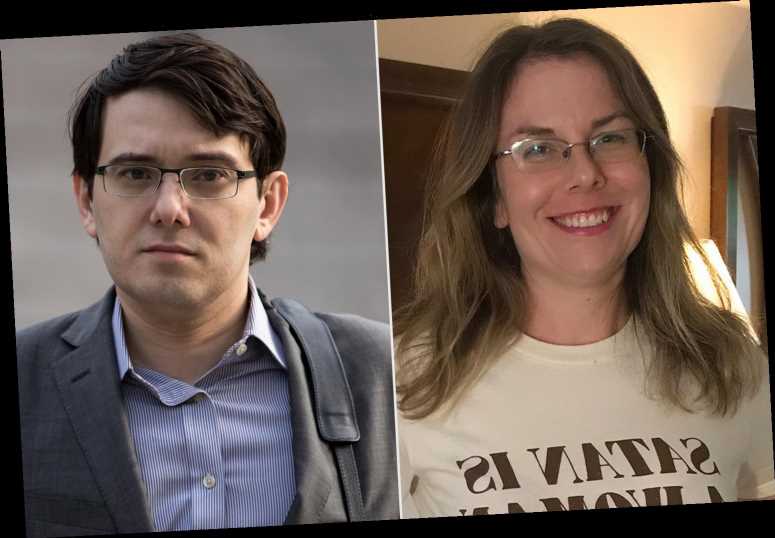 Christie Smythe, a former crime reporter for Bloomberg News, has gone public with her relationship with Martin Shkreli, the biotech entrepreneur derisively known as "Pharma Bro" after infamously increasing a life-saving drug's price by 5,000 percent.

In a lengthy profile published by Elle on Sunday, Smythe, 38, revealed that she fell in love with Shkreli, 37, while sitting in on his 2017 court trial, in which he was found guilty of misleading investors about a pair of hedge funds he operated.

"I fell down the rabbit hole," she said, adding, "I’m happy here. I feel like I have purpose."

According to Smythe, she was living the "perfect little Brooklyn life" with her then-husband when she first learned from a source that Shkreli was under federal investigation for securities law violations in early 2015.

After covering the investigation and his subsequent arrest for Bloomberg, Smythe received a call from Shkreli and managed to set up an in-person meeting with the former pharmaceuticals executive.

"You could see his earnestness," Smythe recalled of their encounter, during she said he had shown her spreadsheets with investors' holdings in his funds. "It just didn’t match this idea of a fraudster."

Following the meeting, Smythe said "he kept toying with me for a while," though the two eventually developed somewhat of a friendly rapport as she continued to angle for access for a profile of Shkreli.

"It really felt like he didn’t have anybody to talk to that he could bounce ideas off of," Smythe said "I was like, "All right. I guess I can do that.' "

Despite a professor at her journalism fellowship at Columbia University cautioning her about developing a close bond with Shkreli, Smythe said she continued to keep contact with him and started to write a book about the controversial figure.

"Maybe I was being charmed by a master manipulator," she told Elle.

Smythe said she began to realize that their relationship was something more than one between a journalist and her source when Shkreli his bail was revoked and he was arrested in fall 2017 after offering $5,000 for Hillary Clinton's hair.

According to Smythe, she had texted and emailed Shkreli’s friends to ask if he had his medications and arranged for someone to retrieve his cat when he was taken into custody until his sentencing.

"I still was in denial about it, but this really hit me hard," Smythe remembered.

Smythe started to become more vocal about her support for Shkreli on social media and by summer 2018, she had quit her job at Bloomberg and moved ahead with her divorce.

"I told Martin I loved him," she recalled of one prison visit. "And he told me he loved me, too."

"It’s hard to think of a time when I felt happier," she added, saying that correspondence "led very naturally into thinking about a future together."

Smythe said they've previously spoken about children and prenups, and that she had frozen her eggs after expressing worry to Shkreli about being too old to have children when he's released. In the article, Smythe called herself and Shkreli "life partners."

However, when Elle reached out for comment, Shkreli said in a statement that he "wishes Ms. Smythe the best of luck in her future endeavors."

The publication also noted that Shkreli stopped communicating with Smythe after he found out about the article.

"He bounces between this delight in having a future life together and this fatalism about how it will never work," Smythe told Elle. "It’s definitely in the latter category now."

Following the article's publication, Symthe defended her relationship with Shkreli, writing on Twitter, "I realize it's hard for many people to accept that 1. Martin is not a psychopath, and 2. a woman can choose to do something with her life (which does not affect you) that you in no way approve of. But that's OK."

"Going public is such a relief, no matter what people think," she wrote in another tweet. "You have no idea how hard it is to keep this kind of a story bottled up. So messy and complicated. I'm glad it was told well."