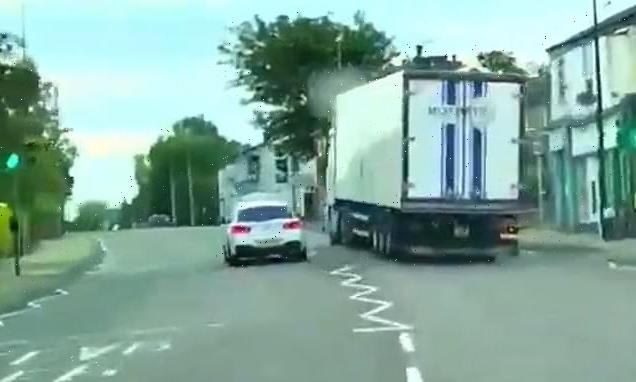 Moment joyrider, 21, led police on 100mph chase through streets of Manchester – before admitting his actions were ‘f*****g ridiculous’ when they finally caught him

A man who led police on a 100mph pursuit in a stolen BMW before crashing into a car and spinning it 180 degrees described his own driving as ‘f*****g ridiculous’.

Jacob Rimmer, 21, was initially pulled over by officers in an unmarked car in Salford after making a number of u-turns in front of them.

‘The defendant drove onto an estate on Whitefield Drive, reaching speeds of 60 miles per hour in a 20 zone,’ prosecutor Gavin Howie said.

‘He then turned onto Queensway Road, then onto the A666 reaching speeds of 80 and 90 miles per hour.

‘He went through a red light, drove on the opposite side of the road causing other vehicles to take evasive action, and at one stage he reached speeds of 100 miles per hour.

‘The police’s speedometer also showed speeds of 120 miles per hour.’

Rimmer, of Worsley, continued on, driving over speed bumps at 60 miles per hour and then turned left onto Trafford Road and lost control of the car.

He collided with a red Corsa, which had only been bought a month before by a young woman. 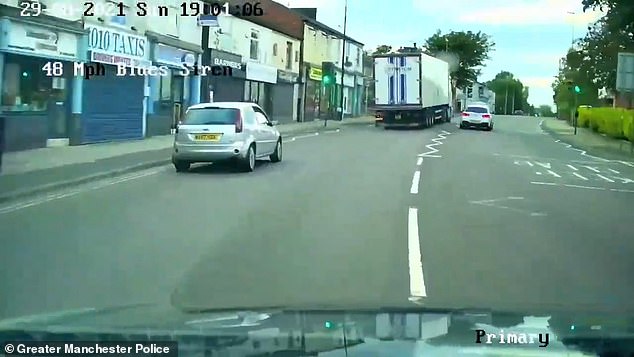 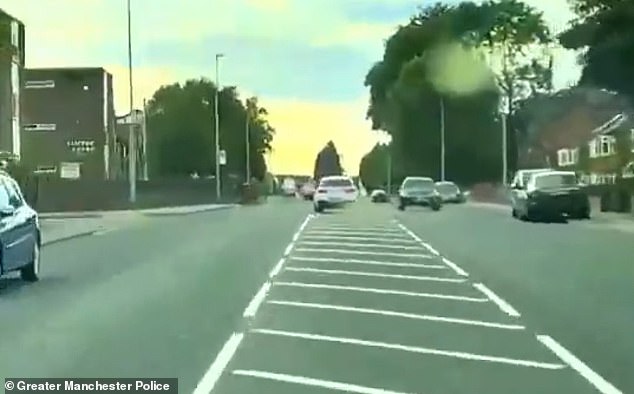 Rimmer, who was driving a stolen BMW, kicked up a cloud of dust as he raced along a busy road in Manchester during the chase

The impact caused the car to spin around 180 degrees.

The woman was left with whiplash and muscular pain, and her car was written off. She has since lost her job as a result.

Rimmer continued driving and failed to stop, eventually abandoning the car near to a housing estate.

He then ran and was pursued by an officer. As he ran he threw a lock knife from his pocket.

‘The defendant ran into a gated area in a residential block,’ Mr Howie continued. ‘He jumped over a wooden fence and the officer says the defendant slammed the gate shut on his head. He was left with a lump and reddening to his face.

‘He felt dizzy, but grabbed the defendant’s jacket.

‘The defendant grabbed him by the body armour and a tussle ensued, with the defendant saying: ‘what the f*** are you going to do about it?”

He only let go once the officer threatened to use pepper spray. 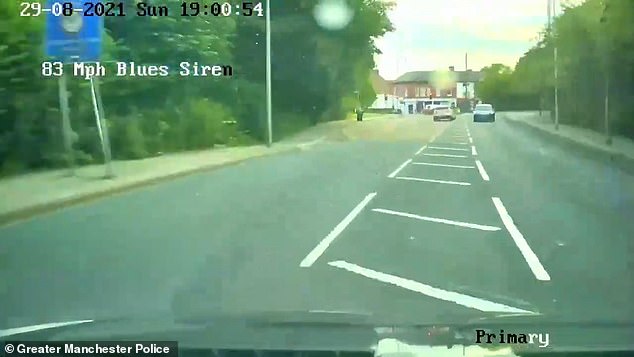 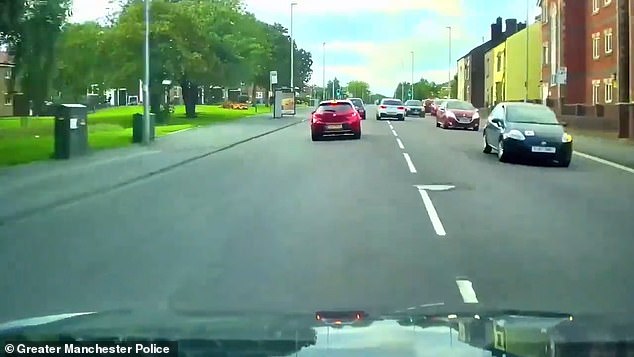 Both officers said the driving was ‘one of the worst they had ever seen’ in their experience in the field.

Rimmer was arrested and interviewed and admitted to the officers his driving was ‘f****** ridiculous’.

The white BMW had been stolen four days prior to the offence on August 29 this year, but Rimmer was not said to be involved with the theft, though he later admitted knowing it had been stolen.

Rimmer was said to have no previous convictions.

Mitigating, his lawyer Lloyd Morgan said his client had been diagnosed with ADHD and said he is ‘absolutely horrified’ by his driving.

‘He does feel shame, bitter regret and remorse for that and particularly for the lady in the Corsa,’ he said. 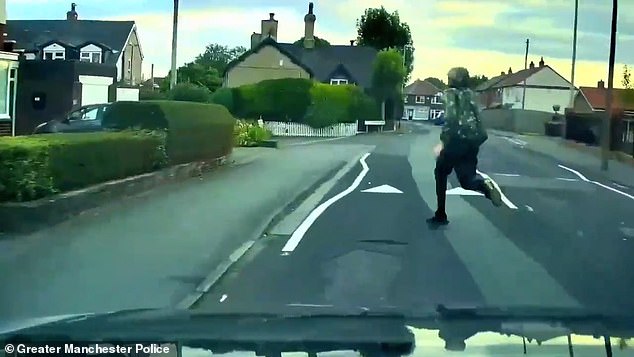 After crashing into another vehicle, sending it spinning, Rimmer ditched the car and attempted to flee on foot

He said Rimmer was employed by HMRC but following the Covid lockdown he found it hard to work from home and distanced himself from his family.

‘He is someone who went off the rails. He is very lucky there were no more people injured,’ he added.

‘It was a perfect storm of circumstances, it was sheer panic and he just wasn’t thinking.

‘He sits in the dock today looking through a window of the metaphorical tears of shame.’

‘You are a young man who had everything going for you, but for reasons beyond the comprehension of this court you drove off from the police in what can only be described as the most horrific police pursuit.

‘It was a sheer miracle that there were no casualties littered along your path and it is by the grace of God that nobody sustained serious injuries.

Rimmer, of Greenleach Road, was handed 22 months imprisonment which was suspended for two years; 25 days of rehabilitation activity requirements; 150 hours unpaid work and was made the subject of an electronically monitored curfew for five months after pleading guilty to dangerous driving; aggravated vehicle taking; possession of a knife and assaulting and emergency worker.